By uomatters | 11/11/2013 - 10:46 pm |11/11/2013 Uncategorized
11/11/2013: Sami Edge of the ODE reports on the issues, with some interesting quotes from Coltrane. and Jeremy Hedlund. Well worth reading it all, here. The admin’s spin is that UO needs more money. But the state is already giving us grief for holding reserves in excess of the OUS maximums, and of course there are millions going to athletic subsidies, police, golden parachute deals, the White Stag, etc.

RG on Benchmarking, meeting with Gottfredson Update, 11/10/13: Back in August the Register Guard editorial board took a look at Michael Gottfredson’s first year as UO president. They weren’t impressed:

… And if a president proves lacking in either vision of his own or the ability to execute the vision of others, the board can replace him.

Gottfredson’s response to this new arrangement — he’ll be liberated in some ways, more accountable in others — will be telling. The board will expect, even demand, that he become more vocal in articulating the university’s mission, and leave behind the caution that can characterize presidents who are in some respects mid-level state bureaucrats. …

Today they take another look, after meeting with him Tuesday, just before he flew south to catch the football game with Stanford. Today’s RG editorial mostly focuses on the benchmarking data from Interim Provost Scott Coltrane, and data from the AAUP national union’s Howard Bunsis. Showing under-investment in faculty. Gottfredson does get a shout-out at the end, but there’s no evidence the editors think he’s broken out of that mid-level bureaucrat mode:

Low per-student spending is reflected in many of the other benchmarks. In 2010-11, the UO had the highest ratio of students per tenured or tenure-track faculty member — 35 to 1. The average at other AAU public universities was 23 to 1.

Five years earlier, the UO’s ratio of tenure-related faculty to students was 32 to 1. The university saw a 20 percent surge in student enrollment during that period, and almost managed to keep pace with a 19 percent increase in the total number of faculty. Nearly all of the increase, however, was among lower-ranked faculty with smaller paychecks and less job security. The UO kept professors in front of its students by watering the soup.

This conclusion is buttressed by an analysis presented in March by Howard Bunsis, a professor of accounting at Eastern Michigan University and chairman of the American Association of University Professors’ Collective Bargaining Congress. Bunsis found that from 2005 through 2012, the number of part-time faculty at the UO rose 38 percent, while full-time faculty increased by 1 percent. Bunsis also found that among nine AAU public universities, faculty salaries at the UO ranked last — except for instructors, the lowest rank examined, whose salaries ranked fifth.

We’d know more, but Gottfredson hasn’t released the performance review OUS did on him this spring, and 15 months into the job UO doesn’t even have the beginnings of a plan to deal with its problems. The early RG story on the meeting quoted him as saying:

The university increased its faculty ranks by about 20 this fall to address the problem, but it would need about 100 additional faculty to keep up with the enrollment growth of recent years, Gottfredson said.

Probably? What fields? What’s the strategic emphasis? How are you going to reallocate funds? Not very inspirational, or even very organized.

11/4/2013: The first step is admitting you have a problem. UO has now done this, sort of, with this public “benchmarking report”, posted here. Produced by Academic Analytics, it lays out a plethora of problems, in admirably blunt graphs. The report was posted today on Provost Coltrane’s academic plan website, here. UO paid quite a lot for this info – here are just some of our consulting expenditures over the past year: 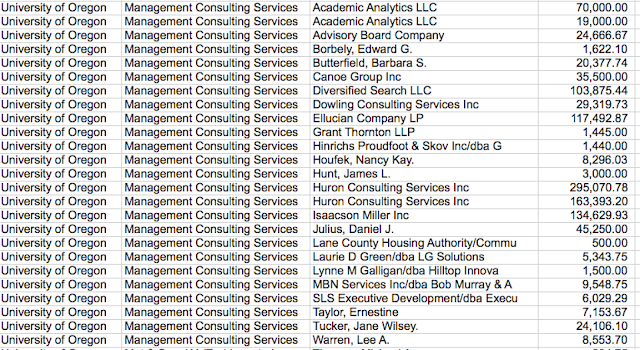 This benchmarking effort is part of the secretive strategic plan that President Gottfredson will presumably be discussing with the RG editorial board, this Tuesday at 1:00. So far the UO Senate hasn’t heard a word about this report, or had any input into the development of a financial plan to address these issues. The Senate Budget Committee hasn’t even met this year. Gottfredson won’t even show the faculty UO’s budget projections, which were part of his secret performance review by OUS this spring:

The benchmarking report does not include any of the sort of skeptical inquiry into UO’s priorities and spending that can be found in the faculty union’s Bunsis Report, here.

Research funding, research output per professor, student SATs, graduation rates, PhD production. You name it, we’re at the bottom or close to it. Here’s my look at the report. The takeaway? This is more transparency than we’ve ever before had from Gottfredson, but the report is slanted so as to make the UO faculty look bad, and it omits important data about UO’s spending and donations. 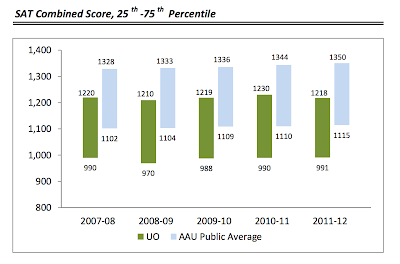 Careful with this one, it’s got a truncated y-axis: 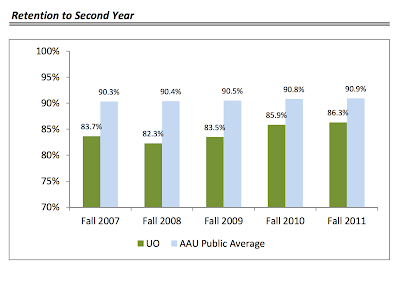 On the other hand we’re doing pretty well serving low income students. I’m guessing most of the retention problem is due to the population of undergrads we are serving – the appropriate population for a public university in a poor state like Oregon: 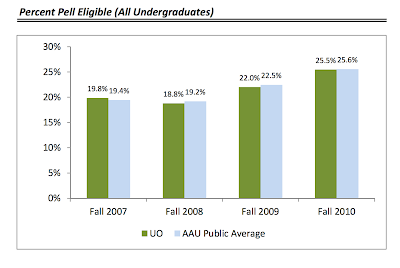 The faculty teach those undergrads that do stay like crazy. UO faculty produce half again as many graduates per tenure-track faculty as the AAU average: 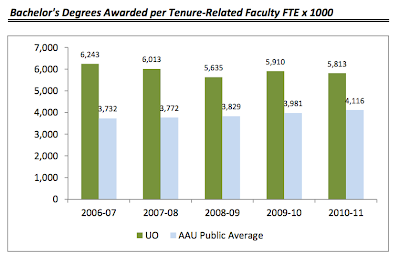 On the PhD side though, things are grim: 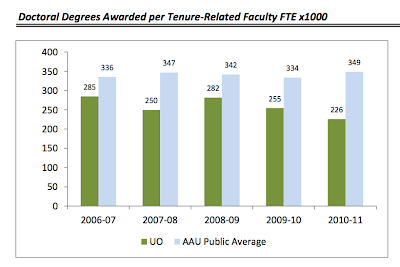 The report has a heavy emphasis on the low research productivity of UO faculty. These data are presumably the reason Gottfredson has abandoned Lariviere’s efforts to get salaries to the AAU comparators – he doesn’t think we’re pulling our weight on the research side: 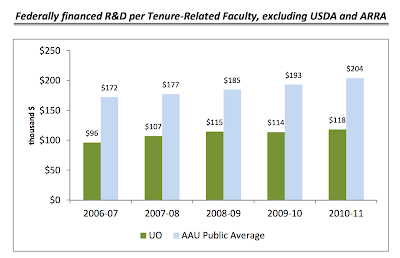 Of course, if these data accounted for UO’s lack of faculty in fields that are eligible for federal funding, the results would look better. They might even flip. For example, on a per professor basis UO’s faculty are fecund producers of books – the standard output in the liberal arts: 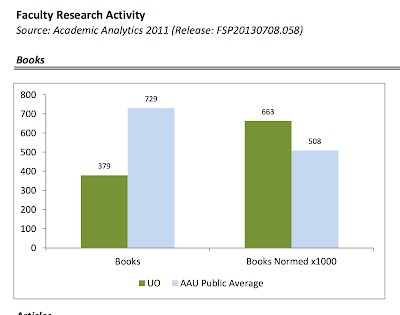 Similarly we don’t do so well on scientific articles – perhaps because we don’t have very many scientists relative to the AAU average? Who knows. While Academic Analytics has those data in spades, the benchmarking report doesn’t show any off those distinctions. Too bad, because it’s exactly the sort of information you would need in order to make intelligent decisions about funding priorities: 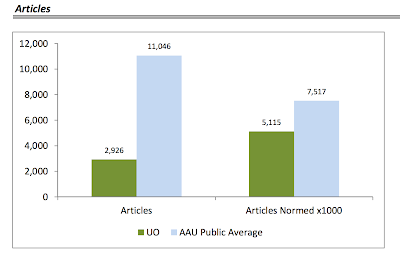 When it comes to finances, it’s interesting to see what UO chooses to report and not report. For total spending per student FTE, we’re at the bottom: 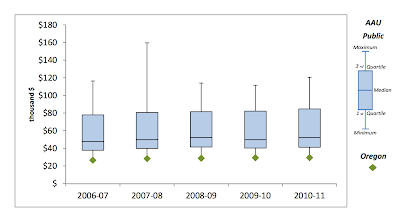 It would be interesting to see that broken out by how the money was spent. Maybe a little too interesting for President Gottfredson. Here’s what Howard Bunsis of the AAUP found when he looked at the numbers. “Institutional Support” means UO’s central administration: 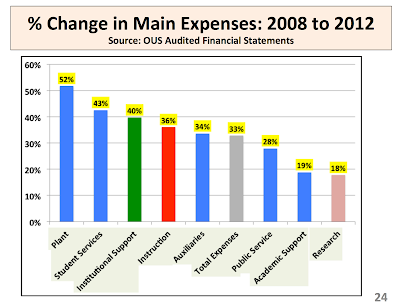 The increase in the JH budget exploded during the Frohnmayer years: 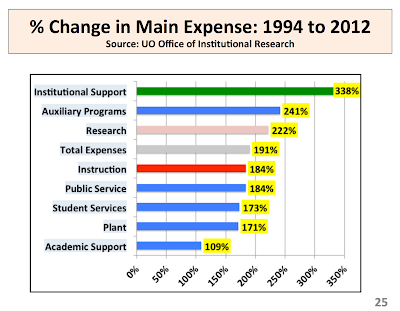 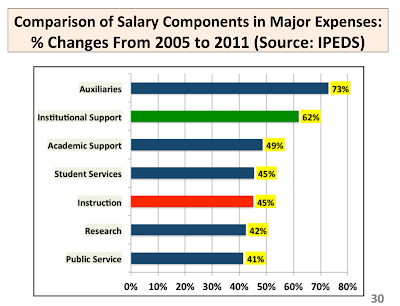 Gottfredson still hasn’t made a serious response to the Senate’s call for a decrease in subsidies for the jocks. Instruction and research have been getting the short end of the stick. On the other hand, UO’s expenditures on $244K golden parachute deals for deadwood administrators don’t even get a bar chart. Similarly, there’s nothing in this benchmarking report on UO’s exploding expenditures on the athletic department. So here’s a little data I put together on UO compared to OSU, for research and athletics:

When it comes to the UO Foundation, the report looks bad according to totals, good relative to UO’s budget:

However these data combine giving to academics and to athletics. VP for Development Mike Andreasen has an aspirational goal of raising the academic sides take to 2/3 of the total – but the athletic department won’t cooperate with his fundraising efforts:

Mike Andreasen: People aren’t inspired by this sort of tax or fee. The idea is to get them excited about the UO, then inspire them to give to the academic side. We don’t want to turn off the athletic donor who might become an academic donor.

Comment: Don’t call it a fee or tax, call it an opportunity to help the students.

Mike: we’re building relationships with these people. If a donor doesn’t want to give to something, we don’t want to be in a position to turn down the gift or to aggravate them. We want to get them excited about giving.

Q: What’s your strategy to get academic donations to be a larger percentage?

Q: If we assume that most of the big donors give to athletics, it would require a big shift in culture or donor demographics of donors.

The UO Foundation has data on the split – is it possible they won’t release them to the UO President? They won’t tell the CAE much – but what they do reveal suggests that giving to UO academic causes is pretty small: 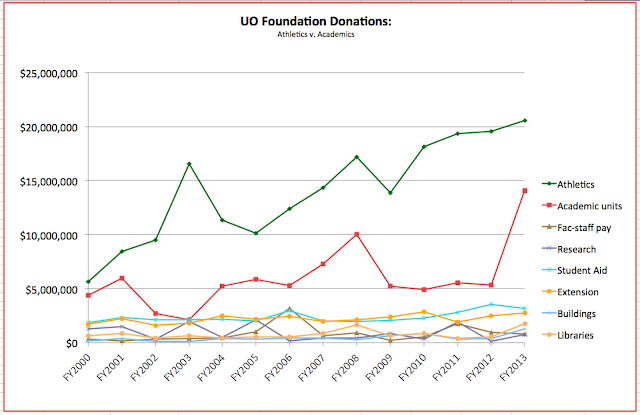 While I’m posting figures, here’s the latest Org Chart. Coltrane has appointed former Journalism Dean Tim Gleason as his latest special assistant. Who knows what UO’s bloated central administration is now costing us. I’ve got a public records request in for Gleason’s job description. Lorraine Davis’s is here. Totally redacted, of course. Because Step 2 is blindly putting your trust in a higher power. 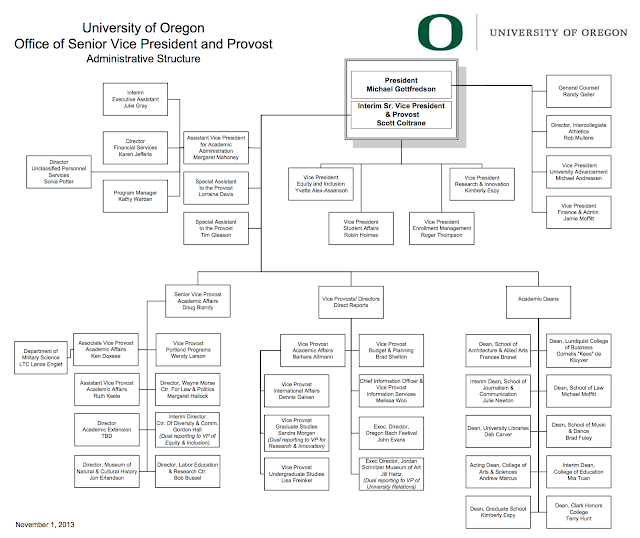