12/26/2013 update: Dave Frohnmayer and Barbara West will also co-teach a 199 Political Science course, “Theories of Leadership”. Experimental 199 classes are supposed to be reviewed and approved by the faculty Senate after 2 years. Frohnmayer and West, who is his former special assistant and holds a PhD in Jungian Psychology, have taught this for many years, with no review or approval.

12/23/2013: Reports are mixed. By UO’s normal tenure reduction rules he should now just be a retired emeritus. And in fact UO’s most recent payroll report lists his regular law professor appointment as having been terminated as of August 15, and his current title and job status as “emeritus”. 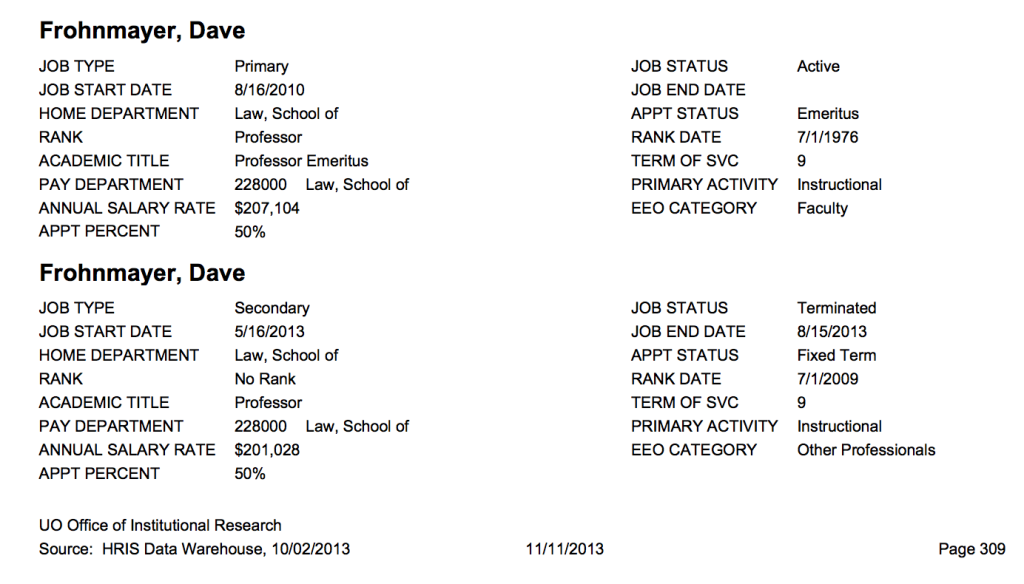 On the other hand, his apparently recently updated Harrang Long et al bio still lists him as a UO law professor, as does this 10/11 ODE story on his appointment to the scandal ridden American Academy of Arts and Sciences. While Nigel Jaquiss’s “Reputation for Rent” story about Frohnmayer’s tobacco company work, published 9/25, identifies him as “part-time law professor” at UO. Of course many UO faculty are able to get teaching work at UO after full retirement, though they probably don’t get paid $34K for co-teaching one 19 student class in the honors college. He’s also signed up to teach a one credit week-long pass/fail class for the law school in spring. No idea what Moffitt will pay him for that.

14 Responses to Is Dave Frohnmayer still a UO law professor?