After substantial pressure from many Senators, President Paris has now agreed to a process by which the Senate will be able to restore this anti-subsidy motion to today’s agenda, and vote on it. The Senate meeting is today, 3-5PM, room 282 Lillis.

Senator Harbaugh’s motion to end athletic subsidies will come to the floor early in today’s meeting – probably at 3:30 PM or so. He will first request that the motion be heard (which requires a majority vote) and then, assuming that a majority is gained, there will be a discussion and vote on the motion itself.

I’ll also share these brief thoughts with you at the beginning of the meeting:

Please know that my sole motivation and responsibility is to ensure that the Senate effectively fulfills its charge as the organ of shared governance at the University of Oregon.

The Senate must be a place in which discussion, debate, and dissent are encouraged and welcomed at all times. It also must use its powers wisely in order to work productively with all of its constituencies.

We have the power to express our opinions and recommendations on any matter, through the enacting of resolutions.

We also have the power to enact legislation. Legislative powers are different from our powers to express our opinions and recommendations. In my view they do not extend to setting budgetary mandates.

Part of my responsibility as presiding officer is to facilitate discussion and action within the boundaries of Senate rules. I am obliged to set an agenda that satisfies those rules. Thus, if a motion for legislation is made that I believe is not within the Senate’s powers, it is my obligation to decline to send it to the floor – whether or not I agree with the substance of the motion. Conversely, if a proffered motion is within our rules and powers, I will send it to the floor, whether or not the University President wishes me to.

But although the agenda-setting function is lodged in the first instance in the Senate president, the Senate’s democratic underpinnings trump that function, and if the Senate disagrees with me, it may override any agenda or rulings that I’ve made. I am your servant, and if you wish to grant the floor to Senator Harbaugh’s motion for legislation, I will facilitate that discussion and eventual vote with as much dedication as I would any other matter.

I’ll do all that I can to ensure an open and efficient discussion today so that we can achieve your goals.

12/4/2013 update: The Knight Commission just released new data on athletic bloat – here’s UO compared to the rest of the PAC-12. I don’t know if this includes the Jaqua Center and Mac Court subsidies – probably not. 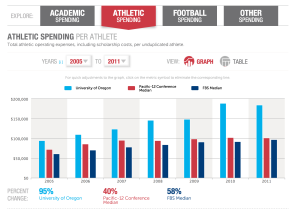 12/3/2013 updates: For background on the athletic subsidies and Frohnmayer’s efforts to keep them secret, read Steve Duin’s 2011 report in the Oregonian, here, and Rachel Bachman here. To his credit President Gottfredson did end the overhead subsidy, to the tune of about $500K a year. But there are millions of dollars in other subsidies left.

Today Senate President Margie Paris sent the Senate this message regarding her last-minute decision to take the motion to end the subsidies off the agenda for this Wednesday’s Senate meeting:

I’m writing to explain a decision that I made yesterday, the result of which is to remove an item from Wednesday’s agenda. This email will give you the factual background of that item and of my decision. It will also invite you to engage in discussion about the issue on this listserv. Ordinarily, the listserv is available only for brief Senate announcements, so as to avoid clogging inboxes, but in the interest of openness on this issue, the listserv will be available to Senators’ postings during the next few days.

The motion was properly noticed and was vetted on November 27th by the Senate Executive Committee, which advised me to add it to the Senate’s December 4th agenda. I agreed, although I expressed misgivings (which I will detail below). Senator Harbaugh explained that the purpose of the motion was to enact in legislative form part of what the Senate enacted last year in the form of a resolution. That resolution can be found at http://senate.uoregon.edu/content/payments-athletics-department-academic-purposes, and it contains an additional item not called for in the current motion – a set-aside of “a sum equal to 2% of the athletic department’s prior year spending on athletics, [to be] redirect[ed] toward UO’s academic purposes, including but not limited to scholarship and student support services for low-income Pathways Oregon students, and academic merit scholarships.”

Under our University of Oregon Constitution, Senate action in the form of legislation has a particular consequence – it triggers a process requiring the University President either to implement the legislation or to engage the Senate in an effort to create mutually satisfactory legislation – and if the latter cannot be achieved, the Constitution requires a meeting of the Faculty Assembly. A resolution, on the other hand, is an expression of Senate views on any matter and does not trigger these consequences.

My misgivings about the current motion involve the Senate’s authority to enact legislation on budgetary matters. Although the Constitution is not explicit on this matter – its only express limitation on legislation is a subject-matter restriction to “issues that relate to academic matters,” a subject matter to which this motion certainly relates – it cannot bestow upon the Senate authority that the faculty does not possess, and I believe that the faculty does not possess the authority to legislate on budgetary matters. On the other hand, I believe that it is appropriate for the Senate to express its views about a budgetary matter through the format of a resolution.

I have consulted with President Gottfredson about the current motion, and he is of the opinion that the Senate does not have legislative authority in budgetary matters.

Given my conviction that the proposed piece of legislation is beyond the Senate’s authority, I decided yesterday to remove it from the Senate’s agenda. I continue to think that it is appropriate and important for the Senate to discuss the subject matter of the motion, and I have added an item under the “Open Discussion” time during Wednesday’s meeting for that purpose.

I think the motion below is pretty self explanatory – it’s a revision of what the Senate passed 19-4 last year. I revised that motion on the floor from resolution to legislation, on the argument from several Senators that we should give President Gottfredson a chance to deal with this problem. He hasn’t, so I’ve brought it back as legislation – which will be harder for him to ignore. I’ve also taken out the part requiring athletics to pay 2% of their budget to academics. This motion is just to end the subsidies, and should hardly be controversial.

I took it the motion to the Senate Executive Committee last week. They recommended that it be put on the agenda for this Wednesday’s Senate meeting. President Paris agreed. I sent her the final draft Friday and it was posted on the Senate website earlier today (Monday). Then this afternoon I got a call from President Paris saying that she had decided that it would be taken off the Senate agenda. And it has been – the new agenda is here – no motion to end athletic subsidies. Which will make it sort of hard for the Senate to vote!

Last I looked the motion itself was still sitting on the Senate webpage, here, but without any link from the agenda. In case it is taken down, I saved a pdf here. Here’s the motion in full:

“The Task Force and the Athletic Department recommend a voluntary financial contribution by athletics to the Presidential Scholarship fund.”;[1]

1.2 AND, WHEREAS in 2008 the Senate passed a resolution reiterating this recommendation; [2]

1.3 AND, WHEREAS in May 2012 the UO Senate passed another resolution (endorsed by four former Senate Presidents in its stronger form legislation) requesting that President direct the Athletic Department to end subsidies for athletics starting on 7/1/2013 and start making payments for academic purposes starting in 7/1/2014;[3] [4]

1.4 AND, WHEREAS two months after the 2012 resolution President Gottfredson wrote to Senate President Margie Paris that

“One intent of the resolution is to ensure that athletics is paying an appropriate share of the costs associated with tutoring and advising of student athletes and for the arena. This is clearly an appropriate aim and one with which I am fully supportive. More analysis needs to be undertaken to ascertain the nature of these obligations while preserving legitimate expectations derived from theexisting agreements. We will expeditiously work to resolve these issues in collaboration with athletics.”;[5]

1.4 AND, WHEREAS the subsidies have not been ended, and to the contrary the payments from the Provost’s budget to support tutoring and advising at the Jaqua Center for Student-Athletes, services that are available only to student-athletes, have increased from $600K in 2008 to $1.8M for FY 2011-12 and then to $2.2M this year, after passage of the 2012 resolution. These services cost about $4,000 per student-athlete, while UO’s spending on similar services for non-athlete students averages only about $225;[6]

1.5 AND, WHEREAS the Athletic Department solicits donations and ticket surcharges for the Duck Athletic Fund, totaling ~$30M for 2012-13,[7] with the statement that,

“The mission of the Duck Athletic Fund is to raise funds to offset the expenses of student-athletic scholarships and related athletic department support at the University of Oregon.”;[8]

1.6 AND, WHEREAS in the most recently available data, for 2011-12, the Athletic Department paid only $7 million from these DAF funds to the academic side for tuition, and did not pay any of the cost of student-athlete services other than a portion of the maintenance costs of the Jaqua building;[9]

1.7 AND, WHEREAS UO’s academic budget has been paying $467,538 a year since 2009 to repay the portion of bonds used to purchase the Knight Arena land representing the area of the Mac Court land;[10]

1.8 AND, WHEREAS nine years have now passed since the 2004 Task Force report calling for voluntary contributions from athletics toward academic scholarships, during which annual operating expenditures by the Athletic Department have increased from less than $40 million to more than $90 million;[11]

1.9 AND, WHEREAS during that time the athletic department has not made any such contributions and in fact has received increasing subsidies from the academic budget.

2.1 BE IT HEREBY MOVED that the Athletic Department shall pay from its budget the full cost of providing tutoring and academic support for student-athletes beginning in FY 2013-14 and that these funds should be directed to general academic purposes;

2.2 BE IT FURTHER MOVED that the Athletic Department shall pay from its budget the full cost of the bonds used to purchase the Knight Arena land, beginning in FY 2013-14 and that these funds should be directed to general academic purposes;

2.3 BE IT FURTHER MOVED that these payments shall retroactively cover the full cost of Jaqua center services and bond payments from 7/1/2013 forward;

2.3 BE IT FURTHER MOVED that the President shall provide the Senate with a budget and a schedule for implementation for reasonable payments from the Athletic Department budget for the support of general academic purposes no later than the first Senate meeting of the 2014-2015 session.

[5] Letter from President Gottfredson to President Paris at http://senate.uoregon.edu/files/President%27s Response to US2012-13_20.pdf