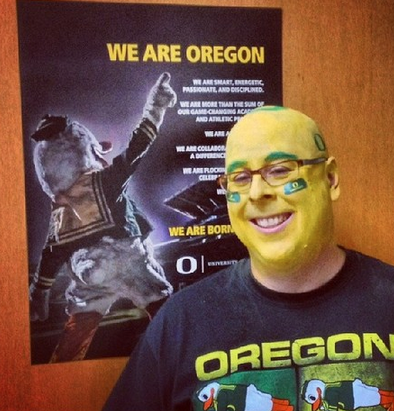 These emails have gone viral, with many hundreds of comments on law blogs like Lawyers Guns and Money, Tax Law Blog, Above The Law, Professor Bainbridge, JDU, Eschaton, Leiter’s Law School Reports, something called Gawker, and Jeff Manning’s piece in the Oregonian:

This was bad viral. The University of Oregon Law School professor’s wild rant about his compensation made Illig look petty and unsympathetic at the same time. More importantly, it shined a light on the raging debate about higher education, the value of advanced degrees and the mushrooming debt encumbering a generation of students.

The official UO law school blog – which, in an admirable demonstration of transparency actually allows comments, has responded:

To The Law School Community:

We’ve been getting some questions about a resolution brought to the last faculty meeting, and we’d like to share some information. Recently the University announced across-the-board cost of living adjustments and merit pay increases to take effect later in the year. A group of law faculty came up with the idea to divert the law school’s portion of the faculty merit pay funds to a post-graduate fellowship program for new law grads, in lieu of accepting a pay increase. Last Friday, this group brought this idea as a resolution (included below) to the regularly scheduled faculty meeting. A wide majority of those present voted to approve the resolution—in addition, a majority of the full faculty support the resolution.

We brought the matter to the Provost and although he is supportive of our goals he cannot bend the University rules to make this creative idea happen. However, we remain committed to finding ways to fund post-graduate opportunities and address other employment issues facing our graduates. We invite your comments and questions on this blog or one-on-one.

(I am not the Faculty Spokesperson. To avoid the appearance of speaking for everyone on the faculty, here I will include the names of some faculty who agreed to sign this statement (and I don’t mean to imply that those not included do not support it): Stuart Chinn, Michael Fakhri, Caroline Forell, Liz Frost, Erik Girvan, Carrie Leonetti, Mohsen Manesh, Roberta Mann, Michelle McKinley, Margie Paris, Jen Reynolds, Liz Tippett.)

The faculty recommends that the dean proceed with conversations with the Provost and the President regarding: reallocating funds for proposed faculty merit raises toward student fellowships, with a focus at present on post graduate student fellowships. If this proposal is approved, the faculty will revisit this reallocation of funds after two-three years.

4/14/2014: Several members of the law school email lists (which included staff, secretaries etc.) have forwarded these two emails from professor Rob Illig (Law) about a plan apparently floated by Law Dean Michael Moffitt (paid $292,800 after a recent raise) to deal with the law school’s enrollment problems and US News ranking, which has fallen from #80 to #100 since Moffitt took over in 2011.

The plan? Cancel raises for the faculty, and use the money to fund a program to give non-profits money to hire UO law school graduates, boosting the employment numbers that go into the US News rank.

Here are UO Law salaries for 2012-13, with comparison to other AAU publics:

Associate Professor Illig is not happy with Moffitt’s plan, or with the lack of transparency in how it was presented to the law faculty (who apparently voted to approve it).

To my shock and amazement, I just learned – three days after the faculty
meeting – that someone (you? the faculty?) is trying to take away my
one-in-a-decade chance at a raise WITHOUT MY KNOWLEDGE OR CONSENT.

Why did I not know that this was on the agenda for the faculty meeting?
Was the lack of notice intentional? (And was there a quorum?)

Why did no one announce the result? Certainly, someone changing my
salary without my knowledge seems like something I would like to hear
about. Was someone hoping I and the others who were unable to attend
simply wouldn’t notice until it was too late?

Note that I was unable to attend only because the regularly scheduled
faculty meeting was recently re-scheduled to conflict with the Oregon
Law Review’s long-planned academic symposium at which I was presenting.

(And, by the way, the complete absence of the deans and faculty at that
symposium was noticeable and embarrassing. A number of the very students
we are trying to support asked why their other law review advisors,
their deans, and their friends on the faculty failed to show up to
support them. I was, in truth, ashamed and had no good explanation – and
many of the students were clearly angry and disillusioned. Expect
another class to graduate with ill feelings toward us. And throwing a
few scholarships their way won’t make up for our failure to be there
when they need us.)

But back to the point – voting on this important a decision without
notice and without serious consideration was a gross breach not only of
procedure but of TRUST.

What did the agenda say? “Discussion of Graduate Fellowships.” Pardon my
French, but this is absolute bullshit. Colleagues do not ambush one
another like this.

How can I trust the administration or any of my faculty colleagues? No
wonder we’ve become a third-tier law school. Who’s going to want to come
here to study or teach in this kind of poisonous atmosphere?

As soon as money got tight, we seem to have turned on one another as if
this was a zero-sum game. Well, it isn’t. And enough is enough.

I’ve watched as our culture has eroded now for almost three years.
Everyone is in everyone else’s business, instead of their own. Everyone
is worried about what everyone else is getting, not what they can
personally contribute. If some professor or professors want to donate
their raise to the students – or to some other worthy charity – that’s
their business. (Personally, i give to Food for Lane Country, Planned
Parenthood, and the United Way. I feel that having given up the chance
at a seven-figure annual income is charity enough for the students, and
I am particularly saddened by hungry children. Maybe I should move that
the recipients of summer stipends donate those funds to the poor and
needy?)

We need a strategy. We need teamwork. We need an Oregon culture where
everyone can trust one another. Please, please, can we go back to the
Oregon I love?

I’m sorry, but I just can’t stop thinking about what I’ve just heard. I
am truly in shock. Who is paying attention at this law school to our
culture?

No wonder the students and faculty are disillusioned and our ranking is
plummeting.

As I learn more of the details of Friday’s proposal, I am even more
perplexed by its logic and frightened by its poison.

Is this some kind of faculty version of white-man’s guilt? We see
students without jobs and think that if we throw them a few of our
dollars we can go back to our scholarship and not worry about whether
they are getting real careers and real training? We can study the 17th
Century and believe we are preparing them for the 21st?

What we owe them is our time and effort and skill, not our paltry raises
(which, by the way, don’t even cover the increase in the cost of
living).

And why stop at our raises? Why didn’t the proposal include the summer
stipends that a shrinking minority of the faculty received? Why not
donate those to the students as well?

We each face different financial pressures. And we each make all sorts
of charitable and other contributions, in both money and kind. Should we
put them all on the table? Do I get to keep more of my raise because
last year I gave more to the United Way than any other dean or faculty
member, even though I am by no means the highest paid? or because I gave
up the most salary when I joined the academy? or because my wife is
chair of the city’s budget committee and personally pushed through a
multi-million dollar bond measure to rebuild a number of 4J’s aging
schools?

And what about faculty with no children or elderly parents to care for?
Should they give more? Or faculty who purchased their houses when prices
were low instead of high? i have only one daughter whose college I must
pay for, but [names deleted] have
more. Should I be asked to donate more to the student fellowships since
my expenses will presumably be lower? What if my daughter does to a
lower priced state school instead of a private college? Should that make
a difference?

And am I to blame for the bad economy? Are my efforts so lacking as to
make the difference between students with jobs and without? Is my
teaching and mentoring so deficient as to merit what is essentially a
pay cut, given that Johnson Hall has already approved the monies?

These are questions we just shouldn’t be asking. That’s why faculty
don’t set each other’s salaries. It is nothing but poison to start
digging into what is fair in terms of needs.

And what are the sponsors of the proposal doing to raise law school
income? My Summer Sports Institute – which the faculty voted wasn’t a
priority – is already projected to bring profit into the law school, not
to mention a reputational boost. I’ve got faculty from top 50 schools,
plus students from places like Michigan and McGill. Our reputation has
spread as far as South Africa and Turkey, with interested students there
trying to raise the funds to come to Eugene. The students are also close
to 50% minorities. And, again, it’s going to be profitable in its very
first year.

Telling me (or anyone else in this law school, whether they are faculty
or staff) that I (or they) don’t deserve a raise approved by Johnson
Hall is simply insulting. And going down that path starts to put us in
the place of K-12 educators, where well-meaning teachers would like to
do more but aren’t being rewarded to do more. It puts the teachers
against the students. And without an occasional raise, where do you
think I’m going to be incentivized to put my efforts?

The culprit here isn’t us. So let’s stop turning our anger and our
efforts on each other.

If you want to lead, lead my example, not by fiat. And certainly not by
ambush.

We had a once-great culture that I was proud to join. But it isn’t
standing up to the test of the economic uncertainty. We need to work
together and be proud of one another’s many varied achievements. And we
need to help the students with our real, individual efforts, not with
symbolic gestures that undercut our trust in one another.

This is not the Oregon I knew.