Duck basketball players accused of gang rape, the week before Altman played them in the NCAA tournament, earning Altman and Mullens $52.5K in bonuses.

5/6/2014: The ODE has a new statement from UO, saying they knew of the allegations on March 9, but were asked by the EPD to not start an investigation until the EPD investigation was concluded. UO chief strategic communicator Toby Klinger also is quoted as saying:

Due to Federal privacy laws, the university cannot provide further details regarding its actions at this time.

That’s not true. The federal Dept of Ed guidelines are here They are focused on protecting the victim to the extent reasonable. Otherwise they give UO plenty of latitude – particularly when it comes to revealing information that might prevent further incidents:

As discussed in the 2001 Guidance, if the complainant continues to ask that his or her name or
other identifiable information not be revealed, the school should evaluate that request in the
context of its responsibility to provide a safe and nondiscriminatory environment for all
students. Thus, the school may weigh the request for confidentiality against the following
factors: the seriousness of the alleged harassment; the complainant’s age; whether there have
been other harassment complaints about the same individual; and the alleged harasser’s rights
to receive information about the allegations if the information is maintained by the school as an
“education record” under the Family Educational Rights and Privacy Act (FERPA), 20 U.S.C.
§ 1232g; 34 C.F.R. Part 99.
15

The school should inform the complainant if it cannot ensure
confidentiality. Even if the school cannot take disciplinary action against the alleged harasser
because the complainant insists on confidentiality, it should pursue other steps to limit the
effects of the alleged harassment and prevent its recurrence. Examples of such steps are
discussed later in this letter.

Meanwhile Josephine Wollington reports in the Register Guard that:

Under federal guidelines, a school should not wait for a criminal investigation to be completed or charges to be filed before starting its own investigation.

Schools should not wait for the conclusion of a criminal investigation or criminal proceeding to
begin their own Title IX investigation and, if needed, must take immediate steps to protect the
student in the educational setting. For example, a school should not delay conducting its own
investigation or taking steps to protect the complainant because it wants to see whether the
alleged perpetrator will be found guilty of a crime. Any agreement or Memorandum of
Understanding (MOU) with a local police department must allow the school to meet its Title IX
obligation to resolve complaints promptly and equitably. Although a school may need to delay
temporarily the fact-finding portion of a Title IX investigation while the police are gathering
evidence, once notified that the police department has completed its gathering of evidence
(not the ultimate outcome of the investigation or the filing of any charges), the school must
promptly resume and complete its fact-finding for the Title IX investigation.

Moreover, nothing in an MOU or the criminal investigation itself should prevent a school from notifying complainants of their Title IX rights and the school’s grievance procedures, or from taking interim steps to ensure the safety and well-being of the complainant and the school community while the law enforcement agency’s fact-gathering is in progress.

5/6/2014: The ODE posts Lane County DA Alex Gardner’s detailed explanation for his decision not to prosecute:

… None of the above would be individually inexplicable, but collectively, and in the absence of additional evidence, they provide an insurmountable barrier to prosecution.

As they say, it’s not the crime, it’s the cover-up. And there’s still no word from our President on what he and his administration and coaches knew, and when they knew it. The 3/19 Steve Mims story on Dana Altman’s knowledge of the previous sexual assault history of his recruit is here. And Rachel Bachman has a story in the WSJ here, which notes:

Apart from any criminal investigation, universities are obligated under the Title IX federal gender-equity law to investigate and adjudicate allegations of sexual assault involving students. According to federal guidelines issued in 2011, universities are required to use a “preponderance of the evidence” standard for deciding responsibility for an alleged sexual assault, lower than the criminal standard of “beyond a reasonable doubt.”

And to whom has Gottfredson given responsibility for UO’s Title IX compliance? The famously incompetent AAEO Director Penny Daugherty, who can’t even figure out how to fill out UO’s affirmative action reports on time. UO’s policy on reporting sexual assaults is here.

5/6/2014 update: A commenter points out this 2002 RG story by then reporter Rob Moseley, now a Duck athletics PR flack, on a previous UO sex and athletics scandal:

The University of Oregon athletic department has jumped to the defense of a program that hosts high school recruits after it was featured on a national cable television special about schools that use sex as a tool to lure prospective student-athletes.

The program, called Teamwork, was featured in an episode of HBO’s series “Real Sports” that aired Tuesday. A reporter from the series interviewed two former Teamwork members, both female, and a former member of the UO football team, all of whom verified that sex can indeed be an aspect of recruiting visits.

The former player was Eddie Smith, who is still on scholarship but never played a down of football for the Ducks after leaving the team due to recurring shoulder problems. Smith was quoted as saying one of the attractions for recruits on official 48-hour visits to the university was “girls. Girls, girls, girls.”

Also featured were former Teamwork members Monica Rodman and Lisa Wanjala. Teamwork is a program for UO students run by the athletic department that can be taken for credit as a college course and that involves participating in many aspects of recruiting, from preparing literature on the program to giving presentations to athletes on various aspects of athletics, as well as hosting recruits’ on-campus visits.

Duckweb CRN info here. And you thought FHS 199 was a scandal?

5/6/2014 update: An anonymous correspondent notes that the delay in reporting the alleged rape may have been driven by an effort to inflate UO’s NCAA “Academic Progress Rate”. An APR of 1000 means every player graduated or is on track to graduate. A 900 means that about half the students are graduating or on track. Players that are suspended or expelled for misconduct hurt the APR, while those transfer out of UO in good standing (or go to the pros) count as on track. The NCAA rules are that

UO’s most recently reported APR was 918: 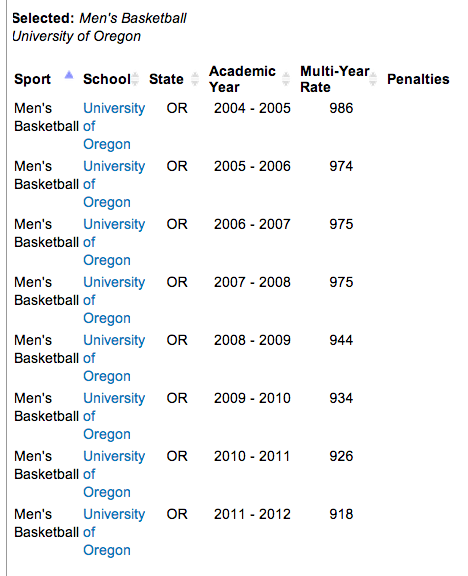 So Altman’s Ducks are close to being banned from the NCAA tournament, giving UO a strong incentive to keep these players on the books as “making progress”, or keep the alleged rape quiet while Altman convinced them to transfer and found another university to take them off his hands.

This is how one of the alleged rapists, Brandon Austin, transferred to UO from Providence College, where he had also been accused of sexual assault. It’s still not clear how much Altman and Rob Mullens knew about that before accepting him. Rachel Bachman story here.

It’s also not clear whether UO’s committee on “special athletic admits”, which includes VP for Enrollment Roger Thompson and President Gottfredson’s special assistant Lorraine Davis and a few hand-picked faculty members, was involved in admitting Austin, or what they were told about his history.

5/6/2014 update: The ODE has a boilerplate statement from AD Rob Mullens and VPSA Robin Holmes:

“The University of Oregon takes all student misconduct that threatens the safety of our students very seriously. We have a clear obligation and responsibility to act in a way that protects all members of our campus community, and our first priority is always to ensure the safety and support of our students.

“Questions have arisen regarding the timeliness of the university’s involvement in the matter reported about University of Oregon basketball. Law enforcement agencies often request that the university wait to take action in order to avoid interference with an open criminal investigation. We responded accordingly in this situation. In all cases we begin investigating immediately, and aggressively address situations in accordance with the law, our internal code of conduct, and our commitment and obligation to protect and support our students.”

The report of sexual violence affecting our community is of deep concern to me, as it is to all of us. The University of Oregon takes such reports extremely seriously. As a residential campus, a close community of students, faculty, and staff, supporting our students and protecting their safety is our highest priority.

I am deeply troubled by the information contained in the police report released yesterday by the Eugene Police Department. The university has rigorous internal conduct processes that we follow when we receive a report such as this, as well as legal processes and a moral commitment to our students. We share a responsibility to provide a safe learning environment for our students, a responsibility I take very seriously.

A listing of resources available to students who have experienced sexual violence or harassment is available at safe.uoregon.edu and at the SAFE hotline at 541-346-SAFE.

The ODE has details on the allegations, here.

Saturday, March 8. Do you remember what happened that day? That was the day Oregon upset No. 3 Arizona on the basketball court. It was senior day. Fans rushed the floor. Oregon’s website, goducks.com, provided an account from the locker room after the game. “You guys are good guys,” coach Dana Altman told his team. Saturday, March 8. Do you remember what happened that night? That’s what the detectives asked when they showed up to interview three Oregon basketball players. It’s what they asked the woman who claimed she was sexually assaulted in a bathroom and again in a player’s bedroom.

Update: Did Gottfredson know about the rape allegation before he decided to dismantle the UO Senate’s athletics oversight committee and tell AD Rob Mullens and FAR Jim O’Fallon they no longer needed to answer their questions? 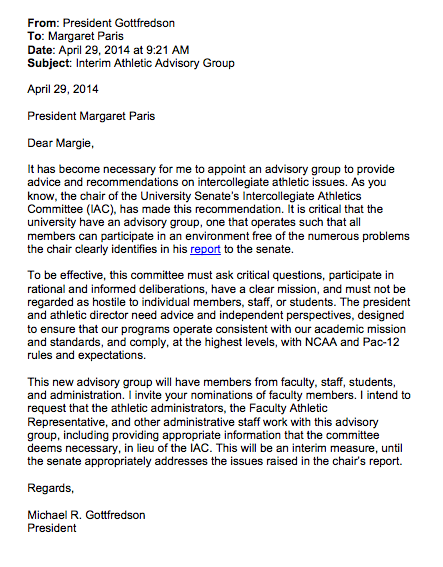 Update: The UO Coalition to End Sexual Violence has a post on this, here:

For too long, we have been falsely assured that the university responds swiftly and effectively to survivors. For too long, we have been told that the university “has established internal conduct processes for handling misconduct allegation.” When we raised issues about serial perpetrators, we were told that the university had no evidence about these. When we talked about institutional betrayal, we were repeatedly told by UO administrators that the people they meet with have uniformly positive experiences of the process. We are angry and bitter that this institution has betrayed our trust. When our institution is more interested in winning ball games than protecting students, that is institutional betrayal. This type of betrayal harms us all.

The first of what are sure to be many stories about the coverup is posted here. The UO administration’s culture of secrecy, their obsession with big-time sports, and the need to pay back the $235M in Matthew Knight Arena bonds by any means necessary have led to a lot of ugly things over the years – this is the worst.

5/5/2014: Andrew Greif has the story in the Oregonian, here. The UO police report is here. The report was filed on March 14. UO kept this quiet, and Coach Dana Altman let the three accused players stay on the team through the NCAA tournament. Their final tournament game was March 22. Altman’s contract is here. He was paid a substantial bonus for the NCAA bid and wins, as are his assistants: 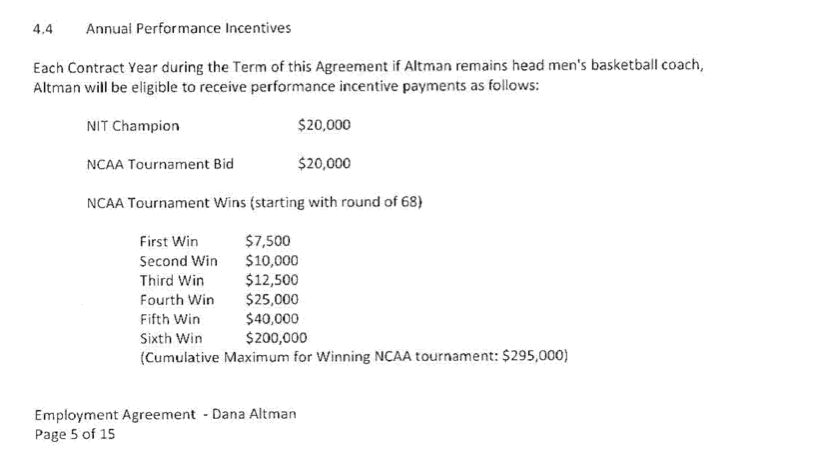 From the police reports filed by UO PD Officer John Loos, starting on 3/14/2014:

55 Responses to Duck basketball players accused of gang rape, the week before Altman played them in the NCAA tournament, earning Altman and Mullens $52.5K in bonuses.