5/27/2014 These are significant changes to the student conduct code. They are important and needed and some parts will be controversial. This post is worth reading in full, especially if you are a voting member of the Senate.

The USDOE Office of Civil Rights recommended changes to student conduct codes in 2011, but VPSA Robin Holmes dropped the ball, busy with other things. On May 14th President Gottfredson told the UO Senate we were to blame for the delays in fixing the student conduct code. But the truth is the administration fumbled this badly. Carl Yeh, Gottfredson’s Director of Student Conduct, told UO he was leaving for OSU in August 2013. The UO administration did not get a new Director until March 31st 2014. The Director is an ex-officio administrative appointment to the Student Conduct Committee, and the convenor. Sort of hard to hold a productive meeting without a Director, given that he’s the convenor. For a matter this important Holmes should have stepped in herself. Instead she hired a consultant and then sat on his report for 6 months, apparently without even convening the committee.

After the March 8-9 basketball rape allegations finally became public May 5, UO Law professors John Bonine and Caroline Forell stepped in. They have done an amazing amount of work over the last few weeks to try and get a revised code in place before the new students arrive in September. All in all there will now be 4 motions on the table for the Senate meeting this Wednesday, 3PM, 115 Lawrence, along with a full slate of other business. Three relatively minor ones come from UO’s new Director of Student Conduct Sandy Weintraub, the last is from Bonine and Forell, and it has also been reviewed by Weintraub.

These 4.11 revisions significantly expand the protections for those making accusations of sexual assault to level the playing field, and they make many other significant changes as well.

For background, Bonine and Forell’s video summary from the 5/21 Senate meeting is here:

Bonine and Forell’s detailed 5/22 explanation for the need for the revisions is here. New UO Ombudsman Bruce MacAllister has written a lengthy, thoughtful memo about the first draft of these revisions, here, endorsing some and criticizing others. Strangely, there has been no word from UO General Counsel Randy Geller’s office. Geller announced his resignation hours before the rape allegation story broke, and while he’s still on the books as GC until June 30th, no one has seen him since.

Below are the most significant revisions, from my initial read. However I strongly suggested reading the full proposal here, instead of my hack job post.

Bonine and Forell have highlighted the parts relating to sexual assault and violence in yellow, to make that easier. Additions are in red with brackets, strikeouts for deletions, blue for explanations from Bonine and Forell, and green for comments from Sandy Weintraub: 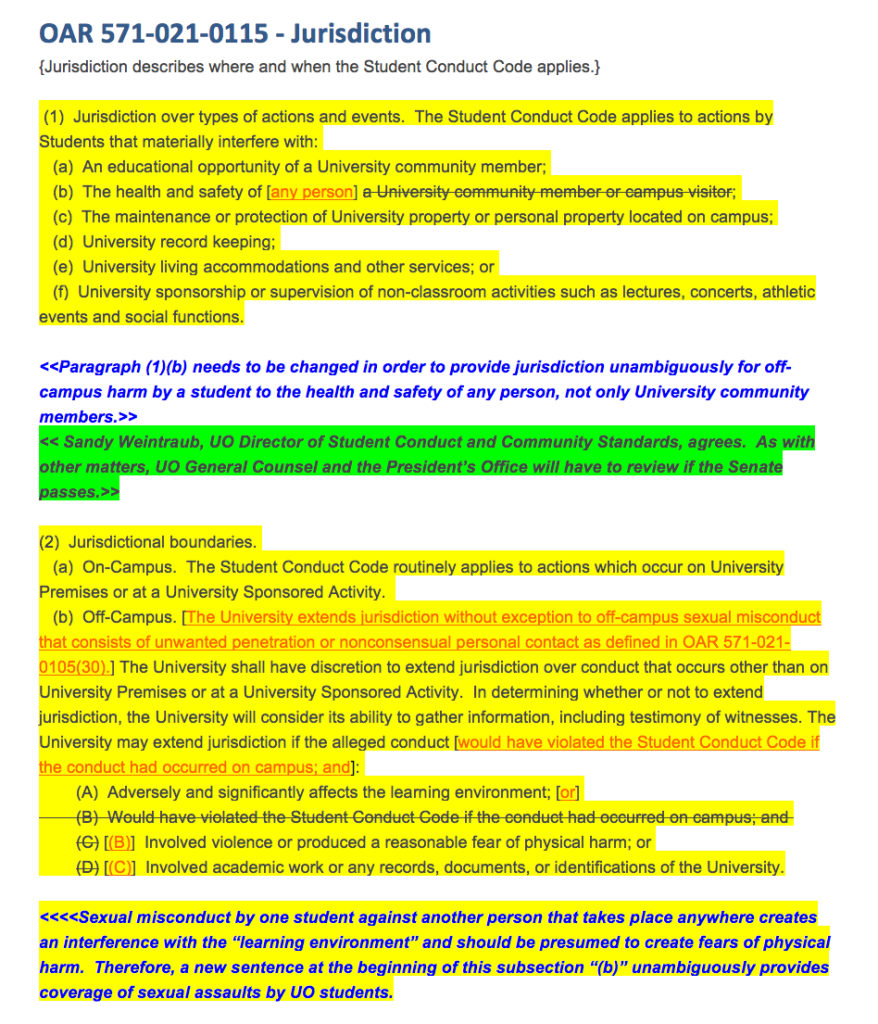 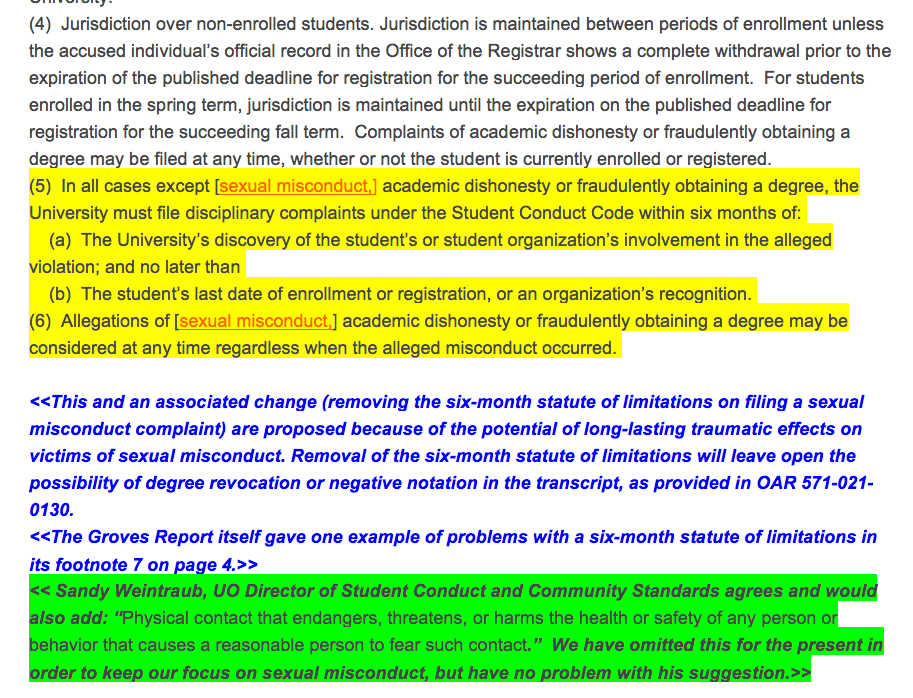 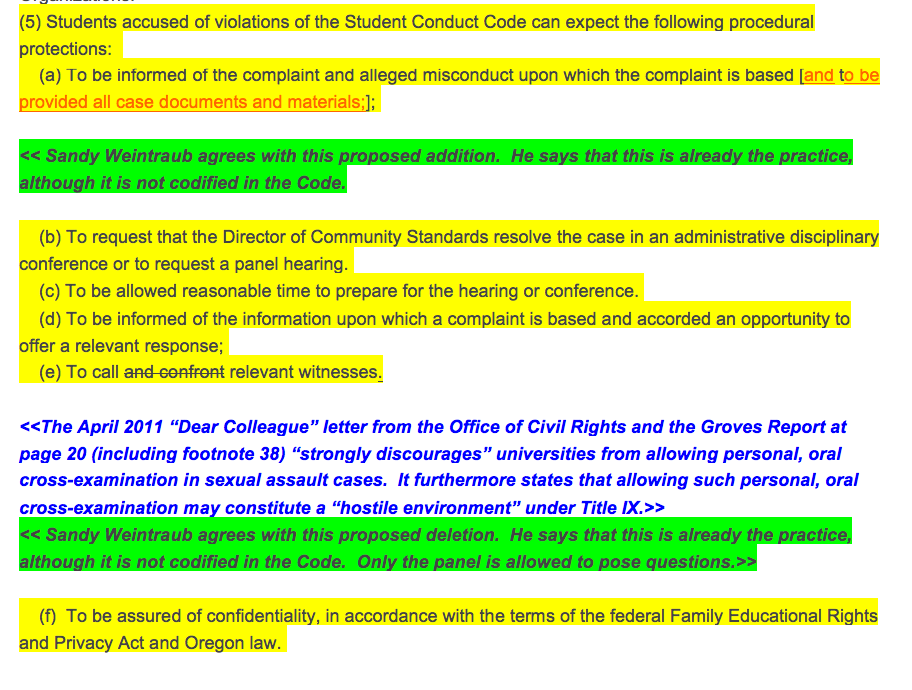 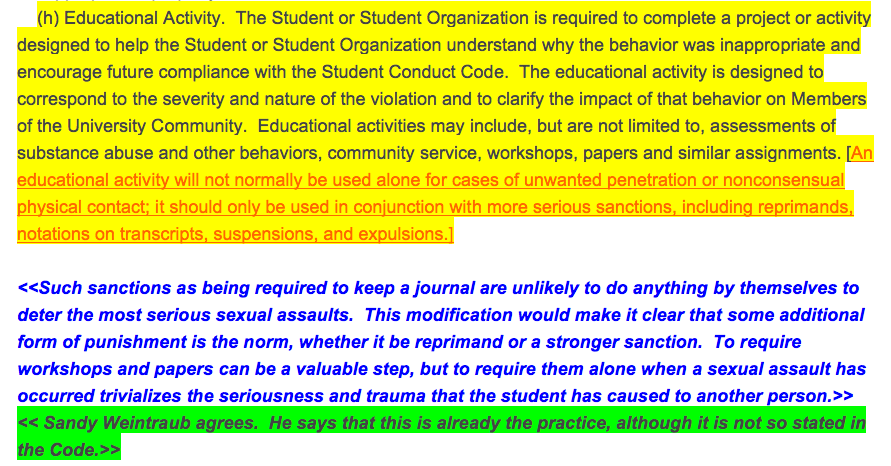 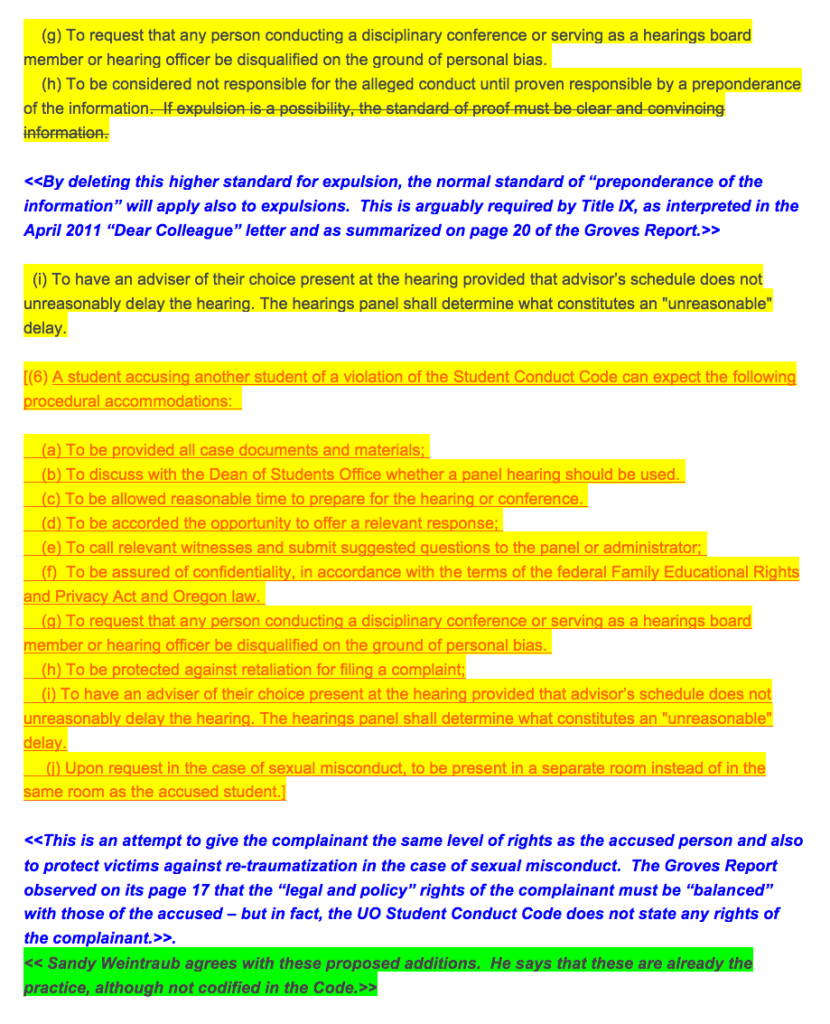 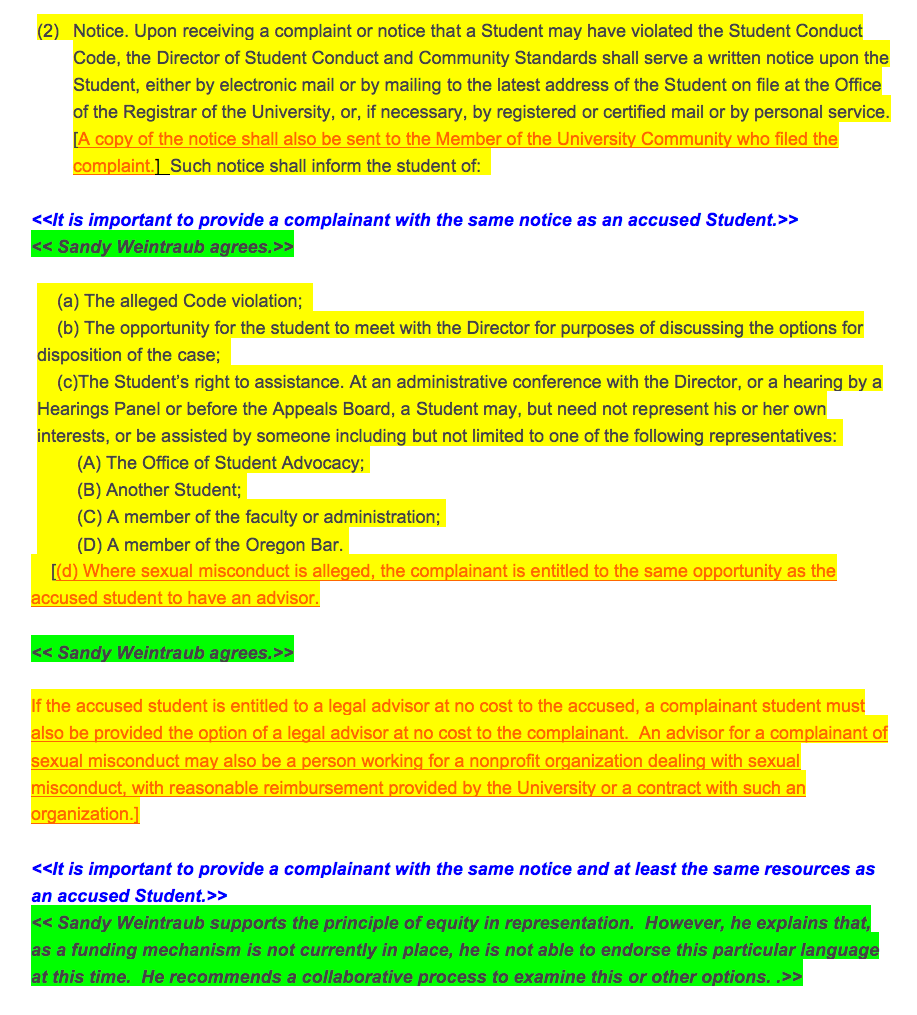 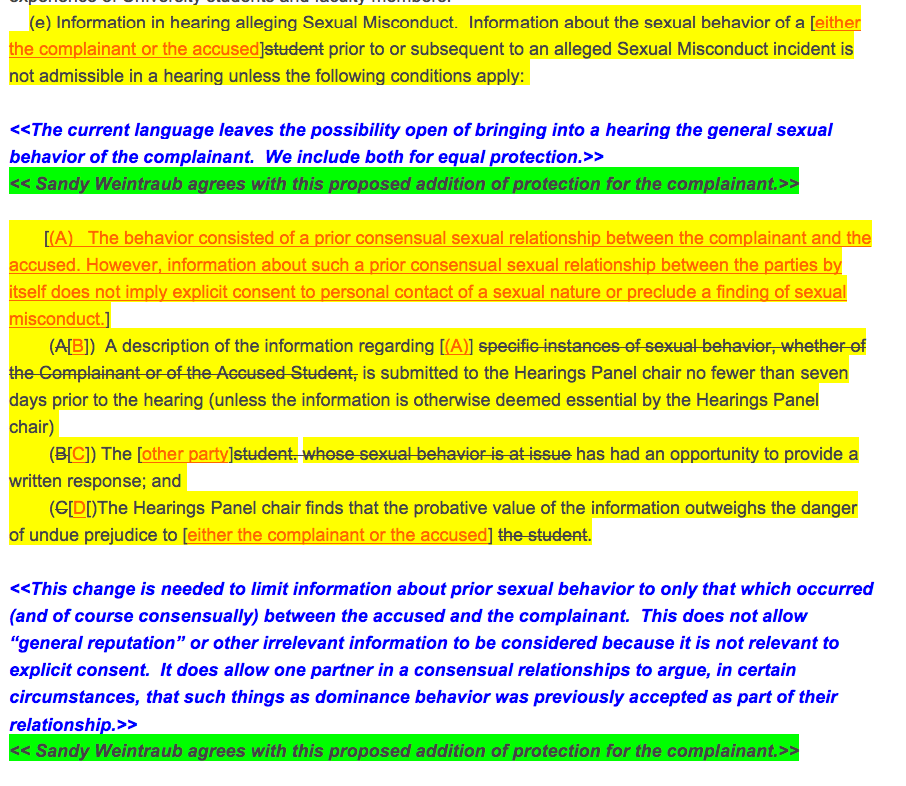 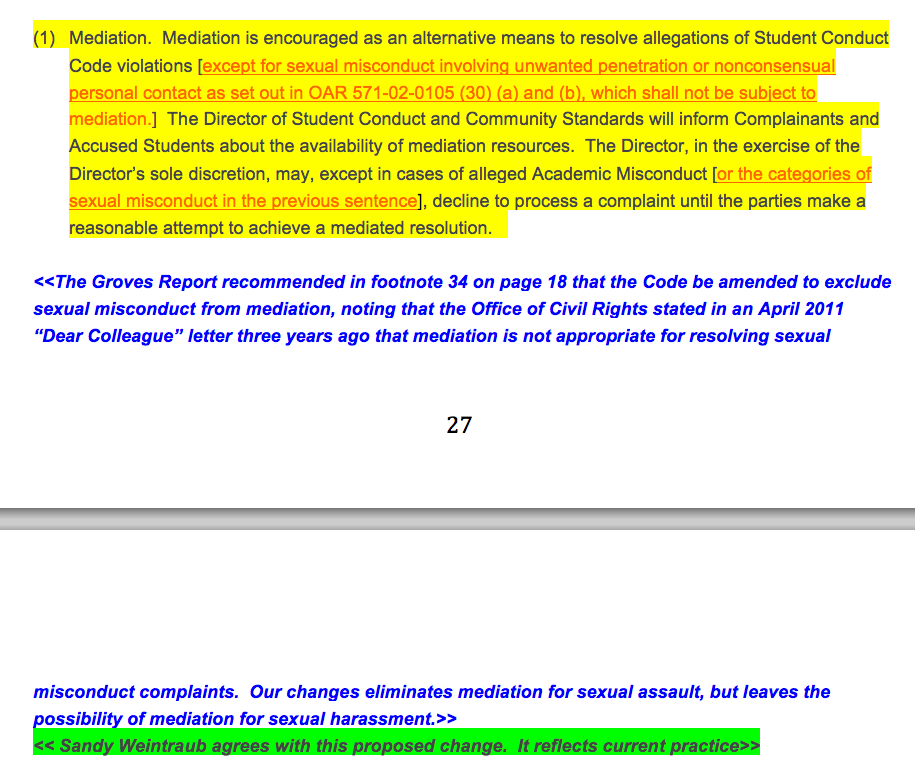