The life of a college basketball recruit, and the coaches cashing in on him.

6/1/2014 update: The Chronicle of Higher Ed has a fascinating story, here:

MARVIN CLARK JR. was sold. Fresh off a recruiting visit to the University of Oregon two years ago, he was convinced he wanted to play there.

He loved the Ducks’ fast-paced offense, the team needed a player at his position, and one of his youth coaches had played for an Oregon assistant. That was the type of edge that could help in a battle for playing time.

The campus wowed him. Everywhere he looked, he saw the Nike swoosh. The company’s co-founder, a big Oregon donor, had helped finance some of the nicest facilities in the country. For a kid who had spent time in homeless shelters, it seemed like nirvana.

A year ago, Mr. Clark made it official, committing to the Pac-12 program over more than a dozen other suitors. Around the same time, he had surgery to repair a fractured foot, forcing him to miss several months on the court. A fractured foot, surgically repaired with a screw, set Mr. Clark’s plans back a year ago.

He was prepared to graduate from high school last year, but Oregon’s coaches had encouraged him to spend a year at a prep school. The week he returned to the court, two Oregon coaches visited him there. It was his first game back, and it showed. After the game, he says, the coaches started to walk out of the gym without offering a word.

That night Mr. Clark hardly slept, fearing that he had lost his scholarship. The next day he called one of his coaches, who had been in touch with Oregon. Mr. Clark’s instincts were right—Oregon had moved on. …

Andrew Greif has a report on Duck recruiting and the NCAA APR in the Oregonian, here. One point:

Interesting. Currently Duck special athletic admits are vetted by a committee convened by Lorraine Davis, a longtime UO administrator, Duck booster in charge of the athlete recruiting parties, and the interim AD after Lariviere fired Mike Bellotti. At least I think Ms Davis in charge of this committee – President Gottfredson hasn’t been very forthcoming about her exact job duties:

I’m pretty sure it’s illegal for UO to redact basic info like this from a public record, but it appears she has no other job description. Full pdf here. Here’s the response from Dave Hubin and President Gottfredson’s Public Records Office:

Attached are the records responsive to your request made 08/01/2013.  Some information is exempt under OAR 571-030.  The univesity has searched for, but was unable to locate, a job description for Ms. Davis.

The office considers these documents to be fully responsive to your request, and will now close your matter.  Thank you for contacting the office with your request.
Sincerely, 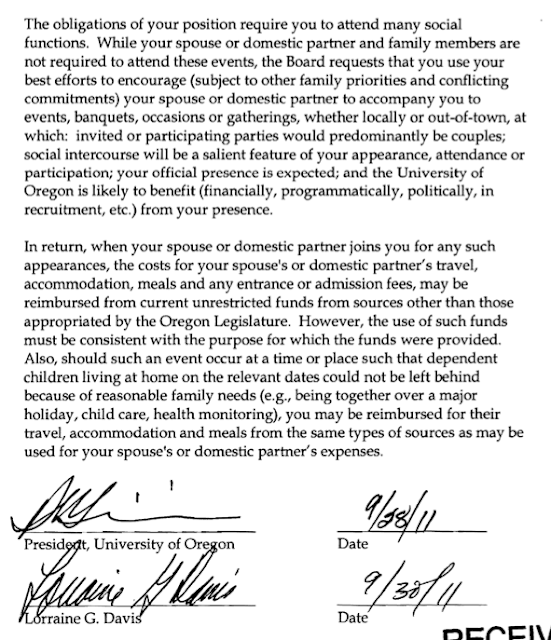 The academic side even paid her a bonus for going to the Alamo Bowl: 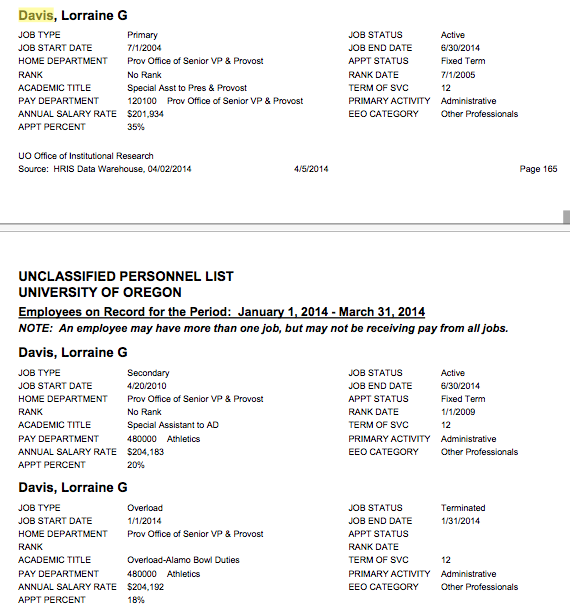 10 Responses to The life of a college basketball recruit, and the coaches cashing in on him.