Genetics proposal aims to build research on the mystery of life

The university is floating a proposal to hire a “cluster” of three new professors to rebuild the classical genetics and genomics program at the University of Oregon and to launch a Center for Genome Function. … “You could think of it as re-establishing our eminence in this field,” said Eric Selker, whose work in epigenetics mirrors fundamental genetics research.

Researchers are likely to find out beginning this fall whether donors are ready to help with their cluster proposals.

The UO’s success in genetics in the 1960s and ’70s was built on just such a “cluster hire” as the university now contemplates, [Frank] Stahl said.

Diane Dietz has the report on a real cluster of excellence proposal:

The theory is “there might be some common principle that can be used to understand interactions of networks, whether it’s neurons or microbes or genes,” UO neurobiologist and assistant professor Cris Niell said. … Cresko and a half-dozen other UO researchers are proposing a “cluster hire” of five new faculty members — “two luminary senior researchers and three junior faculty,” he said. … “We’re in the realm of Harvard, Stanford, University of Washington. That’s the rarefied air that we’re in. We’re on the cutting edge in ways that are right up there with the best universities in the world,” he said.

Diane Dietz has a report on Jim Bean’s “Sports Product Design” culture of excellence in the RG:

I agree with Bean that sports product design is a natural fit for UO. Yes, it’s another distraction from our research mission, and it’s sure to get a lot of giggles at the AAU’s next meeting. But it’s time to get realistic and focus on doing applied work for industry and training our students in how to use a glue gun.

On the other hand, if this is so important for UO, why would we ever put Jim Bean in charge? He’s been back from sabbatical for years – shouldn’t he be teaching classes by now?

The call for cluster hire proposals went out on March 22, due May 1. Provost Scott Coltrane announced the winners June 6, after review by President Gottfredson’s Faculty Advisory Committee. Not a very important review, UO had already posted the request for bids for Bean’s new website, with a deadline of April 30th – before the proposals were even due:

This initiative apparently originated with Kimberly Espy. The March call for for proposals is here. The “Around the O” press release said:

The provost’s office has set aside $2 million for initial hiring. The university will likely repeat the process every two years, he said. After the session, Coltrane said faculty response to the initiative has been “uniformly positive.”

Page down for the Provost’s selection of clusters, released on June 6. Thirty-six department heads and directors, mostly from the liberal arts, have now written this response:

We are writing to respectfully convey our collective sense of disappointment regarding the result of the Cluster Hire competition your office organized to select valuable initiatives that could “achieve national or international pre-eminence,” “build on and connect existing strengths,” and help “improv[e] academic benchmarks.” Judging by the titles of, and the faculty involved in coordinating, the ten proposals selected from the pool of 34 submitted by faculty from a wide array of disciplines, it is apparent that not a single one represents the humanities, liberal arts, social sciences, and arts (with the exception of architecture). The reaction of surprise and dismay from faculty in these areas has been swift and widespread. Wasn’t there a single proposal from these disciplines that would help the university achieve the stated goals? It may be that some of the chosen proposals include a social science component, but overall, and unless it is proven otherwise, the humanities, liberal arts, social sciences, and arts are severely under- represented.

We are not judging the quality of the selected proposals, nor are we suggesting that they are not worthy of support. But the message coming out of this process is clear: the administration plans to invest almost exclusively in the natural sciences (plus a few proposals from other areas, such as architecture, education, and sports business). Other proposals, according to your memo, may still be funded “through specific philanthropic gifts.” But the truth is, as you well know, that philanthropic gifts do not tend to support the humanities or social sciences (or do so in very limited ways). Indeed, the internal cluster hire competition seemed to offer the best hope for advancing excellence in these areas because it would be judged by those best positioned to understand the critical contributions of the humanities and social sciences, their strengths, and their potential for pre-eminence if adequately funded. Instead, the practical translation of these decisions is that university investment in new faculty resources over the next 5 to 10 years will almost completely ignore the humanities and social sciences.

There are, in addition, troubling signs concerning the lack of diversity and gender balance among the chosen proposals, despite the articulated criterion emphasizing “building a diverse and inclusive faculty and student body.” Without having access to the entire list of proposals we cannot state for sure whether this reflects a paucity of proposals that included women faculty or that addressed issues of campus diversity, or if the outcome of the competition is the (intended or unintended) result of a realignment of university priorities. In either case, the lack of representation from certain groups of faculty and areas of excellence among the chosen proposals is striking.

This is a very serious issue, indeed. Without strong investment in the humanities and social sciences our chances of improving our academic standings are limited. No major research university in the country can afford to de-invest in their humanities and social sciences programs. The Cluster Hire initiative should have been (and we certainly hoped that it was going to be) an opportunity for vision and creativity in the use of limited resources to improve the quality of our teaching and research in a way that was broadminded and fair across the disciplines. Instead, the humanities and social sciences have been largely ignored, undermining the credibility of the process itself. As former Dean of CAS, you know very well the quality of our departments and programs, the energy and productivity of our faculty, and the enormous contribution we make to the university’s visibility, research portfolios, instruction, and diversity. There is plenty of excellence to build upon in our departments and programs. We hope that your office, in consultation with relevant units and groups of faculty, will engage in immediate and meaningful action to reverse what seems to be an unfortunate and even dangerous trend.

I am extremely pleased to announce the outcome of the 2014 Cluster of Excellence Faculty Hiring process.  In addition to congratulating the authors of the ten proposals chosen to form the high priority funding list, I would like to extend my sincere thanks to all of the groups who submitted proposals and helped with the review process.

There were 34 proposals submitted to the Cluster Hire process, representing a very wide swath of the university.  The proposals were reviewed independently by three groups: the Research Advisory Board, the Faculty Advisory Council and the Academic Leadership Team.  Proposals were evaluated primarily on the basis of:

Proposals were also reviewed on the basis of:

Based on the three independent reviews we have identified ten proposals as the highest priority list for Cluster of Excellence Faculty Hiring over the next three years.  There was substantial concurrence across the reviewers that these ten proposals had the highest potential for fulfilling the objectives for this first round of faculty hiring.  We will pursue funding for these proposals using all available sources and expect to fund several of them through a combination of philanthropy and institutional sources. The ten highest priority proposals, in alphabetical order, are:

The review committees and I found substantial merit among the proposals that did not make the high priority list.  Not making the top list does not mean those ideas for cluster hiring will be ignored.  Cluster Hire proposals not on the high priority list may still be funded through specific philanthropic gifts and we will be working with the Office of Advancement and individual schools and colleges to make sure that those ideas are part of our larger fundraising campaign goals.  The full list of cluster of excellence submissions will be an invaluable asset to us as we move forward.

Please join me in thanking all of the contributors to the process, as well as the many people involved in the review process.  And please join me in congratulating the ten excellent proposals that were chosen for high priority listing. Sincerely, Scott Coltrane Senior Vice President and Provost Former Provost Jim Bean is, of course, already pulling in the pork for his work on sports products: 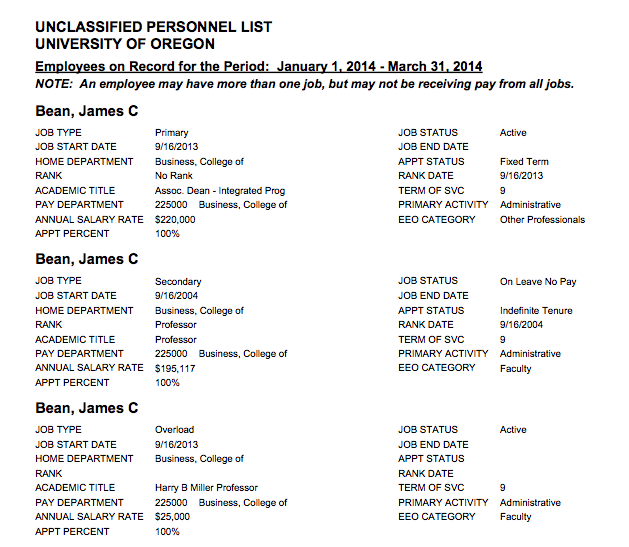