11/29/2013: Every year the state runs a Charitable Fund Drive for employees. You know the drill. You get a few emails from your department head, asking you to sign up for payroll deductions to support community groups like the United Way, the local food bank, and so on. This year’s drive is wrapping up, if you haven’t given you can do it here.

I’m no expert on charitable giving, but as it happens, the Oregon CFD publishes the data on gifts, by unit. It’s rather remarkable. Take, for example, the Duck Athletics Department. There are 6 men’s head coaches, with average pay of $1,062,690. Men’s assistant coaches numbered 21, with average pay of $278,066. Total payroll was about $35M. NCAA data here. And total pledges to the Oregon Charitable Fund Drive from Duck Athletics Department employees for this year? $11,321:

That works out to about 0.03% of income. For comparison, the average American gives almost 3% of their income to charity, and the average UO employee gives about 0.1% to the CFD, making the obscenely overpaid millionaire coaches in the athletic department about 1/3rd as generous as the average UO worker. [Thanks to Uncle Bernie for correction.]

Of course, the coaches are pretty good about pressuring their unpaid athletes to work for charity – and then getting as much good press for themselves as they can out of it. From UO’s Alumni magazine: 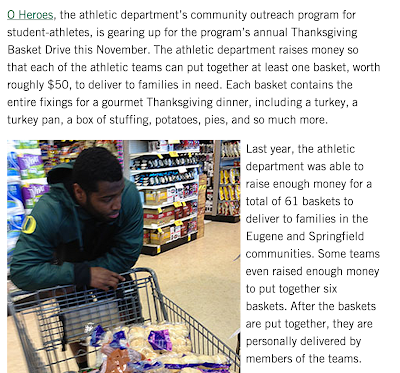 Wow, that’s almost another 0.01% of the coaches’ pay! I’ll have more about the O Heroes program later, but essentially the AD uses a points system to encourage players to show up at booster events and so on.

I’m not too sure what average pay for a UO librarian is, but I’m guessing it’s a bit shy of $1M. They seem to be the most generous:

The B-school’s pretty good too. What about the President’s office? There are a few hefty salaries there. But charitable gifts, not so much:

Thanks to an anonymous correspondent for the idea, the data and the links!