The IAC affirms its support for the Senate Task Force on Sexual Assault Prevention recommendation #1.4, and will work to interpret and implement it.

1.4. Empower the Senate Intercollegiate Athletics Committee (IAC) so that it can address
sexual violence issues as they pertain to athletics:

The elected Senate Intercollegiate Athletics Committee (IAC) is key to implementing education
about sexual violence. The 2014 NCAA report “Addressing Sexual Assault and Interpersonal
Violence: Athletics’ Role in Support of Healthy and Safe Campuses,” emphasizes the
importance of Athletics’ collaboration with the rest of the campus. The policy and practice of
faculty legislative involvement in oversight of intercollegiate athletics at the University of
Oregon date back to October 5, 1895. At that time, the Faculty Assembly, meeting with the
University President, voted to create the University Committee on Athletics. In September 1902,
the faculty added undergraduate students and alumni to the committee.24 The Intercollegiate
Athletics Committee of the University Senate operated in its current form for several decades
until former UO President Michael Gottfredson announced that the Athletic Department would
no longer meet with the IAC. Shared governance, an ideal and policy of the University of
Oregon since the adoption of its charter nearly 140 years ago, is essential to the adoption of
policies and practices that will reduce sexual violence at UO. It is essential that the University
President instruct the Athletic Department to cooperate with the Senate IAC on this important
matter. This cooperation must include a willingness to provide requested information and
cooperate with suggested programs, particularly on matters that can reduce instances of sexual
assault perpetrated by, or on, student athletes as well as promulgating more generally values and imagery regarding gender and sexuality that may promote or reduce sexual violence. The goal of a safe education for students, in a university that is free of the scourge of sexual violence, can only be achieved if all parts of the University are told that they must engage with the shared
governance structures that are dedicated to that education.]

This recommendation requires cooperation with the Athletics Department. The Athletic Department is currently not cooperating with the IAC.

Therefore we request that the Senate pass our charge, after review, as legislation. [Legislation would require that Interim President Coltrane accept, or explain his objections, potentially to a faculty assembly].

Given the urgency, we ask that the Senate Executive Committee work to get this done by November 19th, 2014.

KMTR TV has a report on the meeting here: 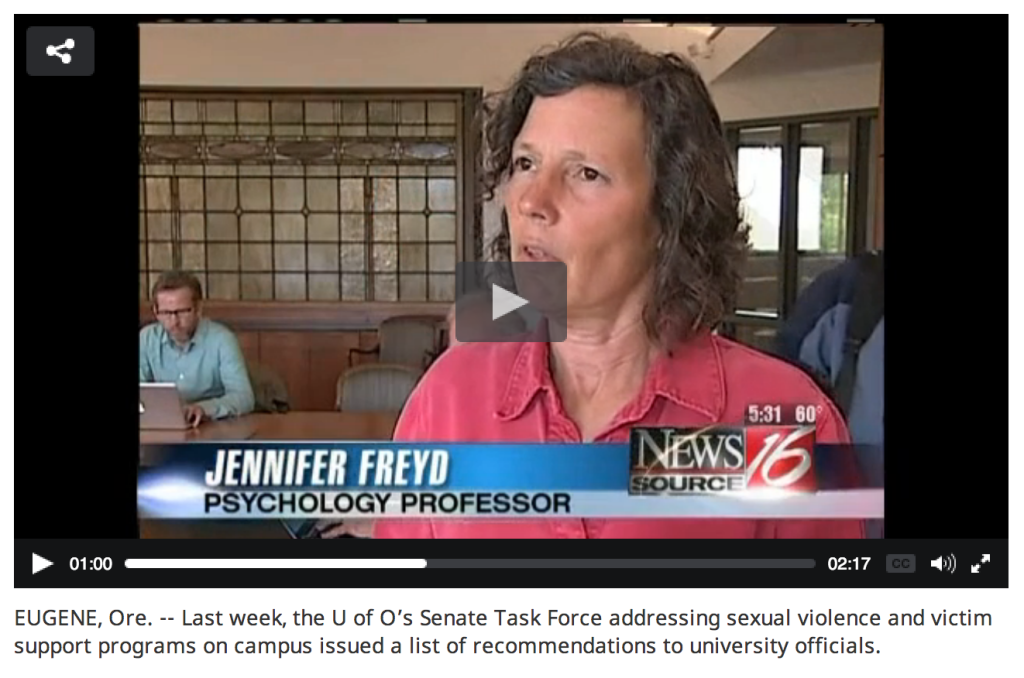 Paris was Senate President last year, and Sheehan is the chair of the “President’s Advisory Group on Intercollegiate Athletics” which President Gottfredson established the day after he finally picked up the EPD report on the basketball rape allegations. The timeline is here:

April 14: The EDP tells UO that their investigation is complete. Under the Clery Act UO was required to begin its own investigation “immediately” after learning of the allegations, but certainly no later than the conclusion of the police investigation. Any UO investigation would have started with the EPD report. But despite EPD requests, UO did not even pick up a copy of the report until April 28. (April 24 in some reports.) That’s 50 days after Gottfredson knew of the alleged rape.

April 21: UO General Counsel Randy Geller tells President Gottfredson he is resigning. The campus is not told until May 5.

Season ticket application deadline & half of DAF donation is due.
Priority points calculated for season ticket and single game benefits.

April 28: UO finally picks up its copy of the investigation from the EPD. (April 24 in some reports.)

April 29: UO’s official “Around the O” blog reports that UO Professor and co-founder of the UO Coalition to End Sexual ViolenceJennifer Freyd (Psychology) has gone to the White House for the announcement of new Title IX rules strengthening universities sexual assault reporting and prevention efforts.

April 29: President Gottfredson suddenly announces he will not require AD Rob Mullens or other athletic department employees to meet with the UO Senate’s athletic oversight and advisory committee, the IAC. Quoting a report by IAC chair Rob Illig (Law) that was never approved by the IAC or the Senate, Gottfredson says he will establish his own “Athletics Advisory Council” and make his own appointments.

The UO Senate Executive Committee declines to cooperate with Gottfredson’s request for nominations to his AAC, until further discussion. Details and documents here.

Sheehan and Paris had the opportunity to speak at length and explain their opposition to this motion. [A recording is available on request, if I can figure out how to get it off my phone]. After more than an hour of discussion, the IAC voted to end debate and then voted to pass the resolution.

At the Senate Intercollegiate Athletics Committee meeting 2 weeks ago we heard a report from Senate Task Force on Sexual Assault Prevention member Cheyney Ryan laying out some of the issues the TF has raised, and describing the stonewalling they had received from some (though not all) athletics administrators. It also appears that the “President’s Athletics Group on Intercollegiate Athletics, chaired by Kim Sheehan (Advertising) has not even met yet on this issue. In any case the PAGIA’s meetings are secret.

The IAC will meet tomorrow to work out what to do. Hint – it probably won’t involve recommending the AD pay $4000 each to bring in more babysitter rapists to talk to the football team. Here’s the meeting announcement from Kurt Kreuger (Printing). IAC meetings are open to the press and public:

Our IAC emergency meeting will take place tomorrow, Tuesday October 28, in the Lewis Lounge (4th Floor Knight Law Center). The meeting will commence at 2:30. I would like to see us end at 4:00 at the latest.

Our sole topic for discussion will be the IAC’s responsibility with respect to the recent recommendations of the Senate Task Force to Address Sexual Violence and Survivor Support.

2. What actions will the IAC take to fulfill this responsibility.

3. Establishment of a draft timeline for these actions