Kyr introduces them by noting that this is the first time in 4 years we’ve had a President or a Provost willing to meet with the Senate Exec. Discussion is about how to get faculty/staff student input into developing goals, and a strategic plan for achieving them.

Chuck Triplett then discusses how he’s going review and revise all the policies we inherited from his former employer, OUS. He’s proposing completely rewriting UO’s “policy on policies”, now to be run by a “Policy Advisory Committee”.

His new procedure contains no mention of the UO Senate. Zippo. Under the current policy on policies, the Senate has considerable power. I’m imagining there will be a few questions!

Q: Where are we out of compliance? Who can come after us? CT: Our academic accreditors, who insisted on the policy library. Hubin: We will *not* be subject to the planned accreditation review in 2017. It will be postponed due to the transition.

JB: Where is the Senate in your flow chart? Our Constitution is quite clear on the Senate’s role.

CT: [Words come out, but I don’t hear a commitment to do this.]

Coltrane: Lots of policies, we need to do some triage. PAC will do much of it. Suggests Margie Paris as a faculty member. [?].

Bronet: PAC will be Senate led.

JB: Where’s the list of policies? CT: I’ll send it to you, but it’s just titles.

Coltrane: BTW, We just discovered we never adopted the UO PD complaint and grievance procedure. It will come your way soon.

1) Office of Gender Equity, headed by a VP. Report will explain what resources this would require. [Very expensive. Check the budget and staffing of the VP for Equity and Diversity to get some idea].

4) Wants to postpone Sorority/Fraternity Rush from fall to winter.

Long discussion about how to deal with the problem of the uncooperative athletics department and the PAGIA.

New draft here. No, don’t click on that link. Trust me, it’s fine. Let’s all move on and hope Bronet posts some of Shelton’s secret budget model docs soon.

The UO mission statement blog has now attracted a fair number of rather critical comments, including:

(1) As a UO retiree and graduate (Ph.D., M.A.), I was dismayed by this draft statement.  Is the UO still a public university? The only mention, under “Lead,” is to declare that it is a “preeminent public residential research university.” Similarly, under “Define,” we find it placed “in Oregon, the West, on the Pacific Rim, and the world.” Geographically correct (though the syntax needs work), but there is no indication in these packed-together phrases that the university aspires to serve Oregon, its population, or its students in any real sense. …  (5) I don’t agree with those who’ve said that the university’s declared mission is unimportant.  To me, at least, it matters that the university have recognizable aims, clearly stated.  The mission statement is a public document.  If I were on the faculty of the university, I’d wonder what this statement demanded of me, and whether I or my department might someday be publicly judged by it.

But probably all for naught, the Trustees are scheduled to vote this week, and they’ve put the original text in the docket.

Come on, you know you can’t resist – add your comments here. Or don’t, and instead read up on what really will matter, Brad Shelton’s budget model. Oh, wait, that’s a secret – website hasn’t been updated in a year, and apparently the Senate Budget Committee (report here), the deans, and the department heads are also in the dark. Here’s the projected data for the 2013-14 FY that ended in June. It will be very interesting to see how much more CAS gets taxed this year, and how much more the law school gets subsidized: 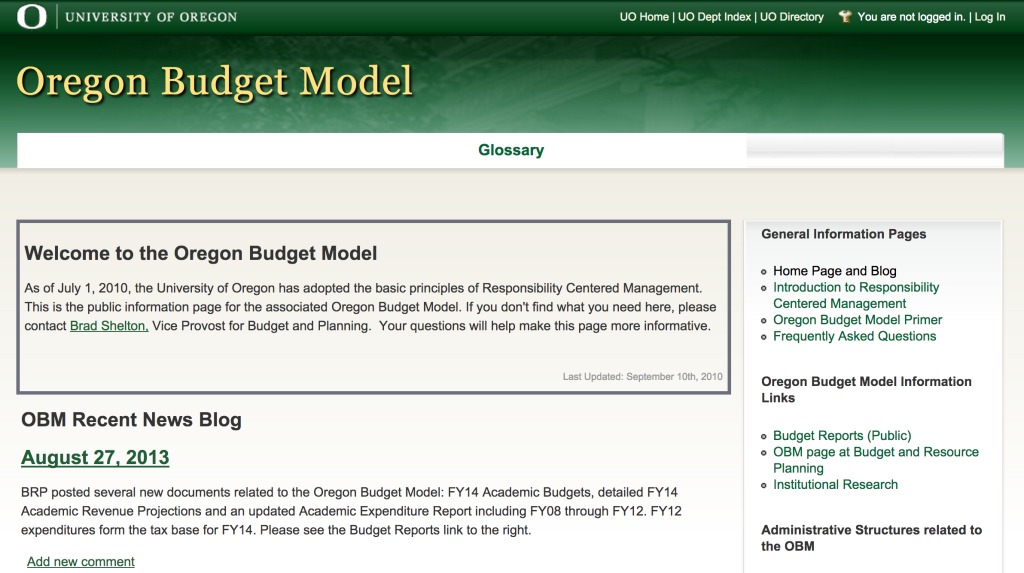