Admins back off veiled threats to international grad students about visas

11/14/2014: Senate to vote on admin efforts to “dilute and degrade” academic standards

Here’s hoping Scott Coltrane will reign in Gottfredson’s $300 an hour lawyers and settle with our grad students. If not, the Senate will be taking up legislation next Wednesday:

One well spoken UO faculty member sent out a pretty plain response to the Deans and Dept Heads about that “confidential” Doug Blandy, Barbara Altmann and Bill Brady memo:

I feel compelled to share my frustrations about the messaging to Dept. Heads and Program Directors in relation to the strike. Just two points:

First, the messaging that repeatedly compares the planning and management process in relation to the strike to what we would be doing if there were an earthquake or a flood grates against this philosopher’s remaining rational capacities. An earthquake certainly, a flood presumably, is not the sort of event that is negotiated in advance by human actors. The continued reference to natural disasters as somehow analogous to what is about to happen here is apparently designed to engage our basic moral sensibilities in a way that is inappropriate to the situation at hand. In the face of a natural disaster, the necessity to adapt and adjust, to be creative and compassionate in the face of tragedy, to also go above and beyond our normal obligations and responsibilities, even in heroic ways, would be unquestioned. The impending events are the result of human decision. They are not comparable in any way to a natural disaster. Our obligations are different in this case than they would be in the case of a natural disaster. Our responsibilities are different.

Second: The imperative to assign all students a grade in order not to interfere with their financial aid, puts the entire responsibility on Dept. Heads and Program Directors for these students’ ability to pay THE UNIVERSITY the tuition dollars they owe. The University administration is apparently willing to put these students in a very vulnerable position. They are also willing to imperil the income to the UO that these financial aid dollars represent. Yet they are asking us to feel fully responsible for the fate of these students and these dollars. If students don’t get their grades, they are implying, we bear the moral responsibility for that. Doesn’t the administration bear responsibility for engaging in this level of stubbornness and brinksmanship in relation to these very same students, and putting us, dept. heads, and program managers who don’t have a place at the negotiating table in the position of carrying out a decision that we have no voice in? If our commitment to the undergrads is sacred, why is the administration willing to put their education at risk? Department Heads and Program Directors should NOT be put in a position of feeling the moral responsibility and weight for individual student’s financial-aid fates, when the administration is clearly willing to put these very same students in jeopardy. We have NO VOICE in the negotiations with the GTFF, no power to impact those negotiations, we should not be made responsible for the result of the failure of those negotiations. The moral appeal is designed to pit our concern for our undergraduate students against our concern for our Graduate Teaching Fellows. No educator should be put in this position, certainly not without having had some voice in the process through which the situation has come to be what it is. A basic tenet of most ethical systems and theories is that one cannot be ethically responsible for those things that one had no part in creating and has no power to influence or control.

In related news, the Daily Emerald reports on today’s GTFF rally in front of the Johnson Hall administration building, home to many overpaid UO administrators:

A member of SLAP also held a sign with the face of Michael Gottfredson on it, and the number $940,000 written across his forehead – a reference to the severance package Gottfredson received upon resigning. The SLAP speakers addressed Gottfredson’s severance as well.

“Our tuition shouldn’t be wasted on presidential severance packages and union busting lawyers,” Huebner said, referring to the outside lawyer hired by the university to aid in bargaining.

Personally, I think the $940K Chuck Lillis spent to get rid of Mike Gottfredson was a hell of deal. I’d have paid $4M of other people’s money.

11/14/2014: Admins back off veiled threats to international grad students about visas

This latest effort from $300 an hour land-use lawyer Jeff Matthews is not going to help UO recruit top international PhD students. The GTFF union has the story here. After they sent our administrators this letter, patiently explaining that the University of Oregon is part of free country, governed by laws, Johnson Hall backed down and retracted their veiled attempts to intimidate international grad students. 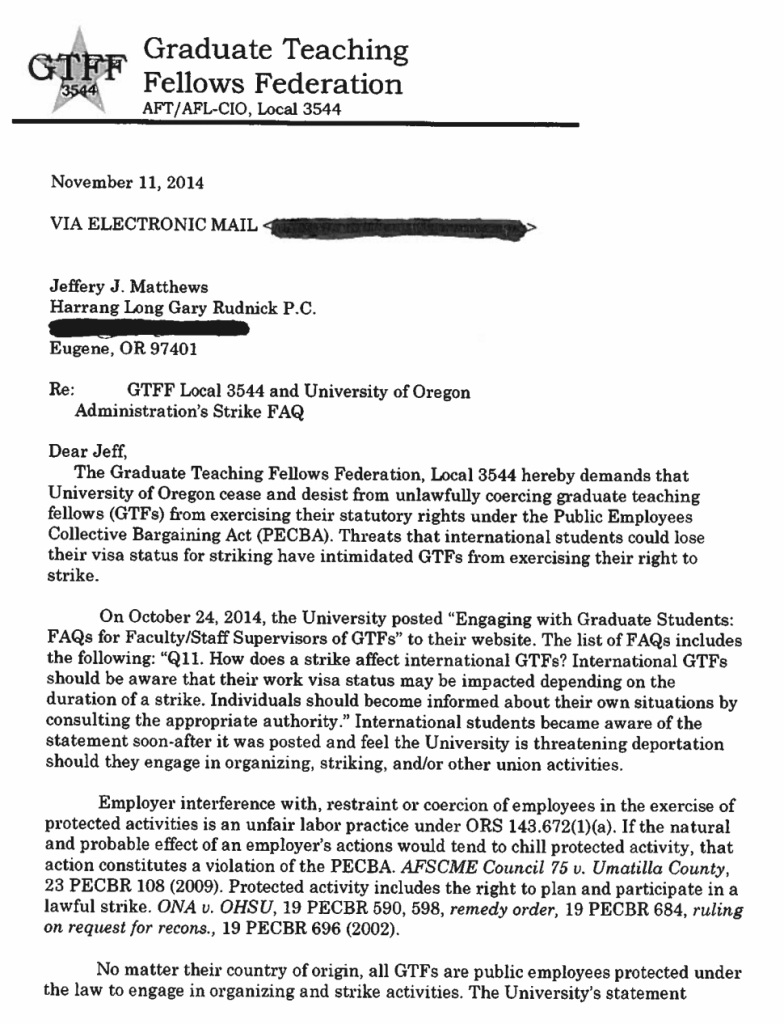