Bloomberg reports that Duck football players have $1.38 million in bonuses riding on bowl games, in the Oregonian here. Oh, wait, this is the NCAA, so it’s all for the coaches. About half of that is already due. Plus the Johnson Hall junkets, of course. I wonder where our AD Rob Mullens will get the money? Oh, right …

Short version: The Ducks have hit price resistance from their regular fans, so they want to raise the fee to student government to $90 per student, to provide “free” tickets.

With the football team doing so well you’d think that ticket revenue would be soaring. Actually, the Ducks seem to have hit the peak of their TR curve when it comes to ticket prices. In 2011-12 the Ducks sold $24,972,647 of tickets to regular fans, and for 2014-15, they are projecting $26,240,000, for a 5% increase. If you include the mandatory Duck Athletic Fund “contributions” needed to get season tickets, the total is up from $52M to $54M – only 4% cumulative, over 4 years. And that’s an estimate from before the basketball rape allegations became public. There’s no mystery to this – why pay the Duck Athletic Fund $5K for season tickets when you can buy a giant flat screen TV and a year of cable for half that?

Fortunately the athletic department still has a captive UO student market to squeeze. Here’s how this works. ESPN needs some student bodies for the TV cameras to focus on, and the athletic department needs to convince the IRS that big-time sports is part of UO’s tax-deductible academic mission. But our students have plenty of other things to do, and there won’t be enough to fill up Autzen, if they have to make the explicit choice between a ticket and, say, a textbook.

So instead of charging students by the game, which would make them see what they’re really paying, the athletic department cuts a package deal with UO’s ASUO student government, paid for with a chunk of the mandatory fees added onto UO tuition. ASUO then gives tickets away to interested students, using an internet lottery of sorts if the quantity demanded exceeds the quantity supplied. (Which at a price of $0.00 it usually does, at least for football games. Not so much for basketball, even before the rape allegations, and even with a Phil Knight bobble-head thrown in).

So what’s a reasonable price for the ASUO’s ticket package? Given the importance to ESPN of being able to show some students, and flat demand from regular fans, the truth is that the Duck Athletic Department would probably be willing to *pay* the students to show up. And indeed, other universities have dealt with dropping student demand by giving away burgers and gifts to those who stay for the cameras until the end of the game.

Yes, even the students who never go to a game will pay $360 to the athletic department over their 4 years. The documents are here. The student charges are under “incidental fees”: 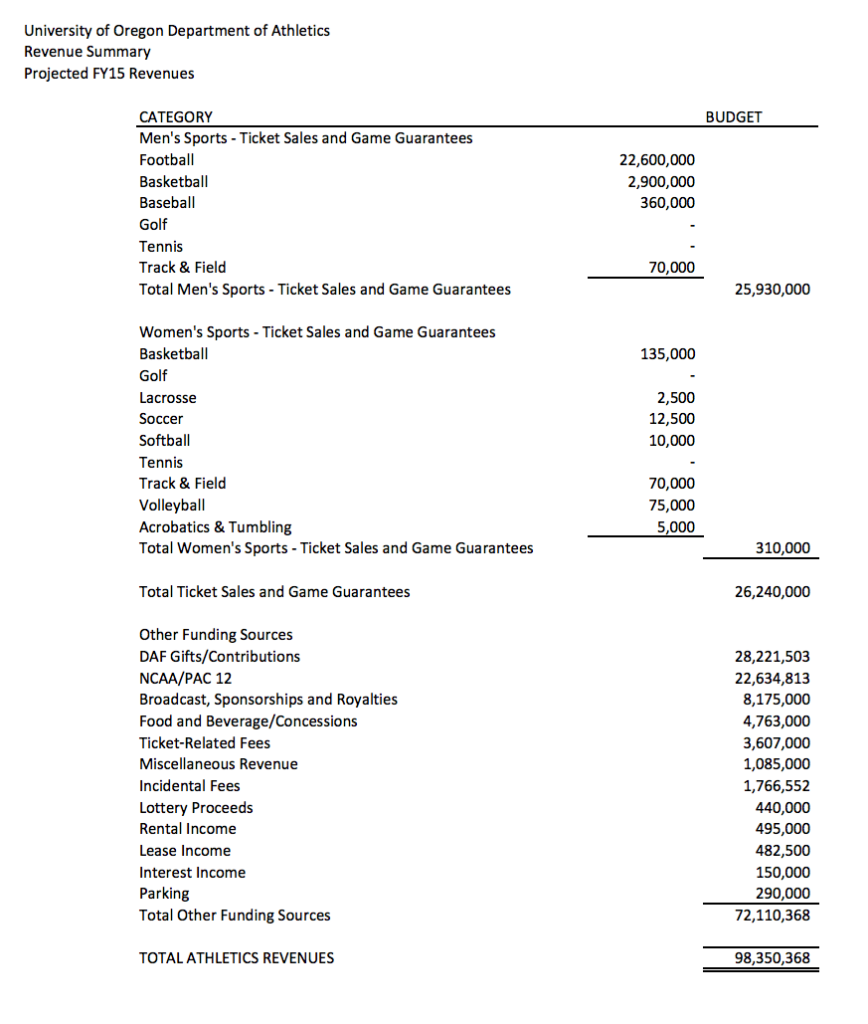 Of course, the flip side of the big-screen TV’s is that athletics cable deal revenue is now so large that the PAC-12 has to hide much of it, to prevent the UO Senate from getting a hold of its share, and wasting it on something like academic scholarships. And don’t get me started on the other large and increasing subsidies the athletic department gets from student tuition money. More on that here.