Good turnout, good decisions. Now we just have to get President Coltrane to implement them.

3.1       Remarks by Interim President Coltrane (delivered by Robert Kyr, Senate President). Coltrane’s remarks focus on what a good job his administration is doing dealing with the sexual assault prevention problems. This link seems to give this basis for this claim, which is not shared by many people outside his Executive Leadership Team.

Jennifer Freyd moves to suspend the rules to consider a resolution rejecting the UO administration’s response to the basketball rape allegations:

“Not in Our Name: The UO Senate rejects UO’s response to the lawsuit from the student survivor of alleged rape”

1.1  WHEREAS on January 8th 2015 the University of Oregon student survivor of an alleged March 8th-9th 2014 gang rape by three UO basketball players sued the University and Basketball Coach Dana Altman;1

1.2  AND WHEREAS on February 9th the University filed a counterclaim against the student, asking the court to order her to pay the fees for the University’s own outside lawyers;2

1.3  AND WHEREAS the University’s counterclaim outraged many in the university community and the public;

1.4  AND WHEREAS, despite withdrawing the counterclaim on February 26th, the University retained language from the counterclaim saying that some of the lawsuit’s allegations (a) amount to “unclean hands,” (b) “threaten to harm … all sexual assault survivors in Oregon’s campus community“ and (c) create a “risk that other survivors will wrongly be discouraged from reporting sexual assaults and sexual harassment”;3

1.5  AND WHEREAS the University’s efforts to defend itself in this and similar cases should be limited to disputing facts, instead of using its legal documents to make sweeping, polemical policy statements that themselves can cause harm to survivors;

2.1  BE IT THEREFORE MOVED that the University of Oregon Senate appreciates Interim President Coltrane’s decision to drop the University’s counterclaim against the student survivor, for UO’s legal fees;

2.2  AND BE IT FURTHERMORE MOVED that the Senate fears that the victim-blaming language that is still in the revised response listed under “unclean hands” will harm victims of sexual assault at the University of Oregon, discourage them from reporting rapes, and have a chilling effect on them defending their civil rights in court;

2.3  AND BE IT MOVED that the Senate requests that the University report to the Senate on how the University originally decided to file this counterclaim and how it later decided to continue the assertions that parts of the alleged victim’s lawsuit are to be blamed for discouraging rape reports;

2.4  AND BE IT FURTHERMORE MOVED that the University of Oregon Senate asks the University President to withdraw the remaining counterclaim language that has been retained as a charge of “unclean hands”;

101. Plaintiff’s attorney represented plaintiff throughout Oregon’s investigation of her allegations and conduct proceeding, and consented to the process about which he now complains. Plaintiff is therefore estopped or barred under the doctrine of unclean hands from complaining about the process.

102. Plaintiff’s attorneys filed a lawsuit with unfounded allegations that damage a good man’s reputation7 in an attempt to curry favor and gain traction in the media and create pressure for a public university to pay a hefty sum to plaintiff even though it has done nothing wrong. In this case plaintiff’s counsel’s false allegations threaten to harm not only Oregon and Altman, but all sexual assault survivors in Oregon’s campus community. The publication of false allegations about Oregon’s handling of a report of an alleged sexual assault creates a very real risk that other

survivors will wrongly be discouraged from reporting sexual assaults and sexual harassment to Oregon, in direct contravention of the goals of both Title IX and the University of Oregon. Conveying the facts about how Oregon properly handled plaintiff’s case is necessary to demonstrate the high priority Oregon gives to honoring the rights guaranteed by Title IX.

7 See, e.g., John Canzano, Every Day Oregon Stands With Dana Altman Is Another Step Into the Muck, Oregonian, Jan. 8, 2014 (accepting as true the false allegations in the complaint that Altman knew about prior allegations of rape against Austin and calling for his termination).

Debate on the pros and cons, then the Senate passes this unanimously.

Randy Sullivan puts this forward. Asks for more time to figure out what to do about the FAC. Passes unanimously after amendment to extend deadline to give new UO President time to weigh in.

4.4       Motion (Legislation): Temporary Exemption of the Faculty Advisory Committee from the Provisions of US13/14-19, “Open Committee Meetings“; Senate Committee on Committees

Good discussion, delayed til the second meeting in April to think it over. We also learned what AVP for Collaboration Charles Triplett does to earn that $130K: he’s keeping a list of who’s been naughty and nice in the Senate: 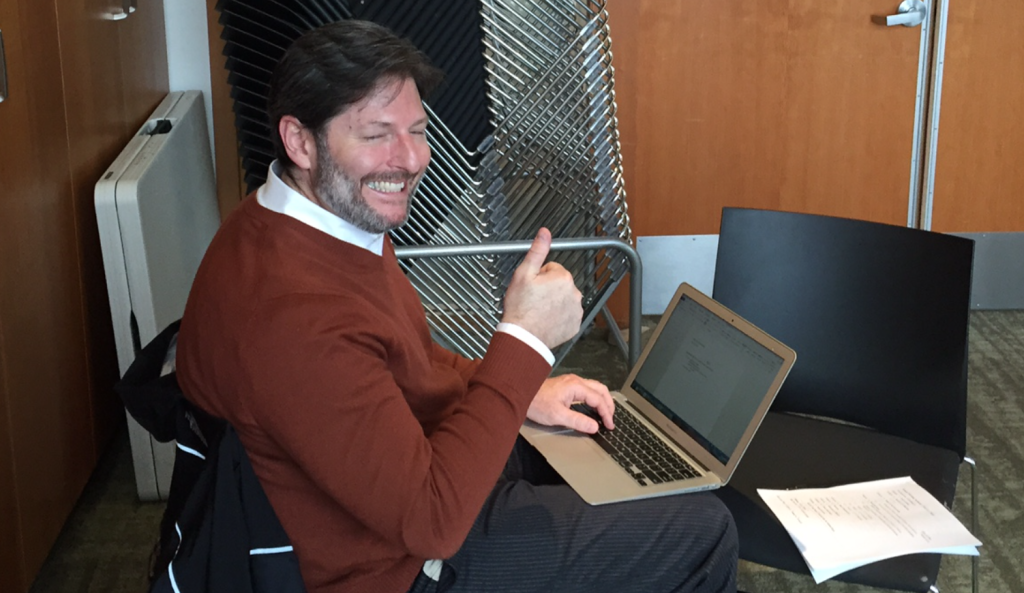 Come on Chuck, this is pathetic. You need a computer? Dave Hubin has been doing this in his head for years.