The administration’s bargaining proposal to cut real faculty pay is here. The well is dry, Jamie Moffitt is telling us. And that’s what she’s going to tell the UO Board of Trustees in their closed session on union bargaining on Friday.

But forensic accountant Howard Bunsis thinks Jamie Moffitt is wrong. And he’s got the data to prove it. The UAUO faculty union has now posted the full Bunsis video, in all its glory:

The 82 powerpoint slides are here, but I encourage you to watch the video to get the explanations. Bunsis gives these sorts of talks at universities all over the country, and he has done a particularly thorough job for UO: 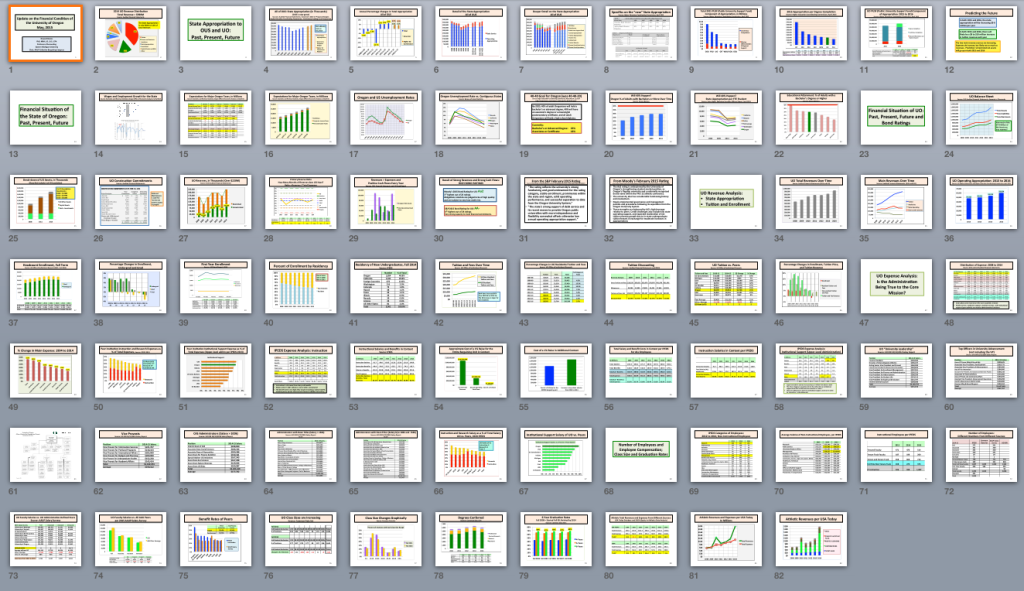 I don’t see any redactions – unlike Moffitt’s:

Howard Bunsis is a lawyer, CPA, and professor of accounting at Eastern Michigan, specializing in “forensic accounting”. He’ll be giving a presentation next week on the true state of UO’s finances, extracted from UO’s audited financial statements and the data that UO is required to report to the feds. The Bunsis presentation in 2011 persuaded me and a lot of other faculty to sign union cards.

UO’s VP for Finance and Administration Jamie Moffitt has told the United Academics union that the university is broke, and can only afford to give faculty a 1% raise over the next 2 years. Now she’s going around telling the department heads the same story. But after 5 years of Brad Shelton’s ever shifting budget model and the many special exceptions Johnson Hall deals out to their friends and relatives, there’s not much trust.

During the 2013 bargaining, the administration’s take-it-or-leave-it offer was 4.5%, spread out over two years. Bunsis showed up at the bargaining session and ran circles around Moffitt. A few months later Sharon Rudnick agreed Bunsis was right, and that there was enough money in the well for 12% cumulative raises. Then Tim Gleason threw in $350 in goat money. Deal.

In short, Howard Bunsis is a dangerous man with a powerpoint. Expect some high-powered bullet points. Show up Thursday May 28, 6-7:30 PM in 115 Lawrence Hall to see if UO is really broke. Open to the public.