Full doc here. This is far short of the full investigation of Penny Daugherty’s operation of this office that is needed. Presumably the Senate will now have to vote for the administration to do this properly. 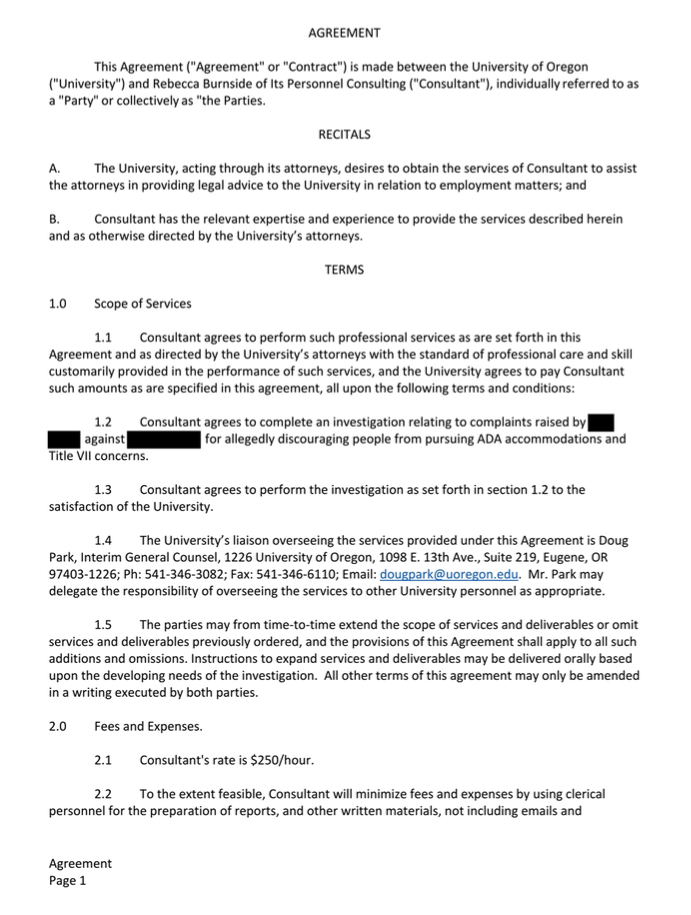 7/15/2015: UO uncertain if it has public records on AA investigator Burnside

The University of Oregon, Office of Public Records has received your public records request for “a copy of the contract (or charge or other public records describing the scope of work and payment terms) between UO (or UO’s law firm or other representative) and Rebecca Burnside (or her firm) for an investigation of UO’s Affirmative Action office”, on 07/10/2015, attached. The university is uncertain whether it possesses the records you have requested.  However, the university will search for the records and make a response to your request as soon as practicable. …

Office of the President

This seems a little weird. Nice of them to keep looking though. There must be something in someone’s email, even if they are running the contract through a law firm.

7/10/2015: Will Rebecca Burnside’s AAEO investigation be real, or a whitewash?

Given the troubled history of UO’s “independent investigations” it’s a reasonable question. So let’s ask Doug Park for records showing just what it is that he charged her to do:

This is a public records request for a copy of the contract (or charge or other public records describing the scope of work and payment terms) between UO (or UO’s law firm or other representative) and Rebecca Burnside (or her firm) for an investigation of UO’s Affirmative Action office.

I’m ccing Interim GC Doug Park, as he should have these documents easily at hand.

I’ve learned that Rebecca Burnside has been contracted to conduct an investigation of the affirmative action department. After stating that she would like to cast as wide a net as possible, she later clarified that she will not look into student-related matters. Still, she has expressed interest in speaking to as many employees as possible who may have information for her report. To that end, she can be reached at rebecca@its-personnel.com. I’ve heard that her request is to spread the word, please!

Rebecca Burnside is an attorney and HR consultant, website here. Still waiting for the official “Around the 0” announcement.

That’s the rumor down at the faculty club breakfast table. Given AAEO Director Penny Daugherty’s famously incompetent management, this is hardly a surprise. Presumably there will be an announcement from the UO administration soon – I think AAEO reports to VPFA Jamie Moffitt.