In January Interim President Scott Coltrane claimed that my request to the UO Archives reference desk for copies of the UO Presidential Archives led to the “unlawful release” of thousands of pages of documents – most notably a memo from then UO General Counsel Randy Geller to then Interim UO President Bob Berdahl proposing that Berdahl dissolve the troublesome UO Senate and replace it with more complacent faculty.

Coltrane or his lawyers persuaded new UO Library Dean Adriene Lim to break the American Library Association’s ethics code on the confidentiality of circulation records and out me as the source of this memo. VP for Academic Afffairs Doug Blandy then threatened me with discipline if I didn’t return the records.

I did, and so, in need of a new scapegoat, Coltrane fired longtime UO Archivist James Fox – a guy I’d never even heard of, much less conspired with. As with so many other Coltrane decisions, that turned out to be a big mistake.

While I didn’t know who James Fox was, plenty of other people did. Coltrane’s Fox firing was protested by an editorial in the Register Guard, an RG Op-Ed from none other than Ursula LeGuin, an open letter from ~130 UO faculty, and a letter from the Oregon branch of the AAUP. The “incident” was the subject of many stories in the RG, Oregonian, The Chronicle of Higher Education, and more.

The university has not yet released the terms of the settlement agreement – I’ve made a PR request – but presumably it paid some financial compensation to Mr. Fox. I hope it was a lot.

UO has now posted redacted copies of the Presidential Archives that I returned to them, on its Public Records website. They’re available on request from UO Public Records Officer Lisa Thornton here.

I’ve only glanced through these, but I think the redactions made by the public records office can best be described as “erratic” and possibly as “unlawful”.

The letter from the UO Archives giving me the original archives explicitly warned me that the files still contained confidential information and that if I disclosed it I’d be in trouble. UO’s Public Records Office has left a lot of what looks like confidential – or at least personal and embarrassing – documents in their sanitized release, and they include no such warning.

At the same time my initial take is that the sanitized archives have hundreds of “unlawful redactions” that violate the spirit and letter of Oregon’s public records law. Here are a few of the funnier ones, from the top of a big pile: 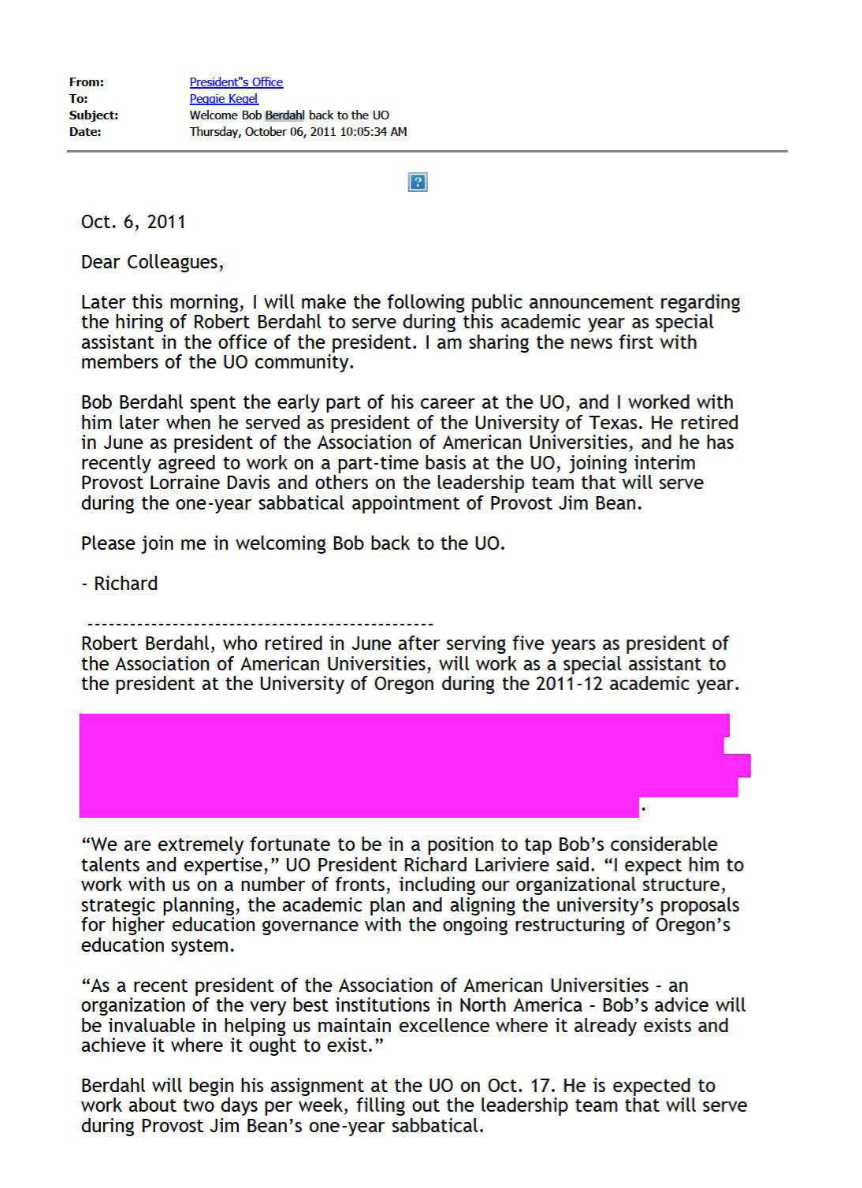 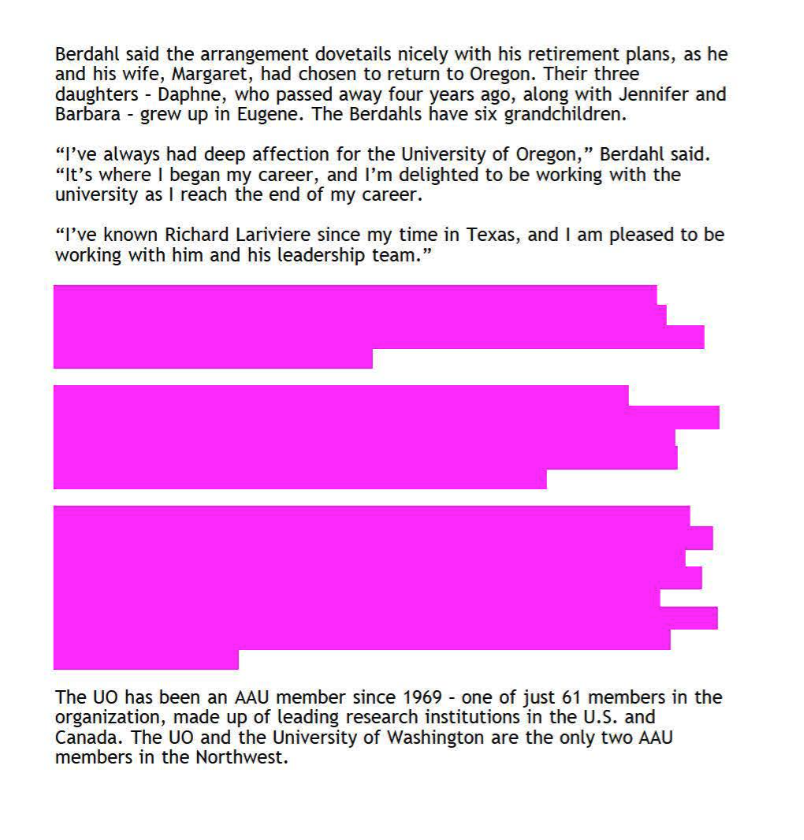 That’s right, Dave Hubin and Lisa Thornton have redacted a press release. You can get the full text from “Around the O”, here.Does this mean Around the 0 has been posting unlawful press releases, or does it mean the PR Office has been making illegal redactions?

Here’s another one. They redacted all the faculty names from the search committee that gave Scott Coltrane Jim Bean’s job:

But wait – those names are all posted on Around the 0, here. It’s trivial to find more violations of at least the spirit of Oregon’s public records law in what Hubin and Thornton have done. Here’s some dire information about the future of the UO law school that seems clearly to be of  public interest. Too bad it’s all redacted in pink: 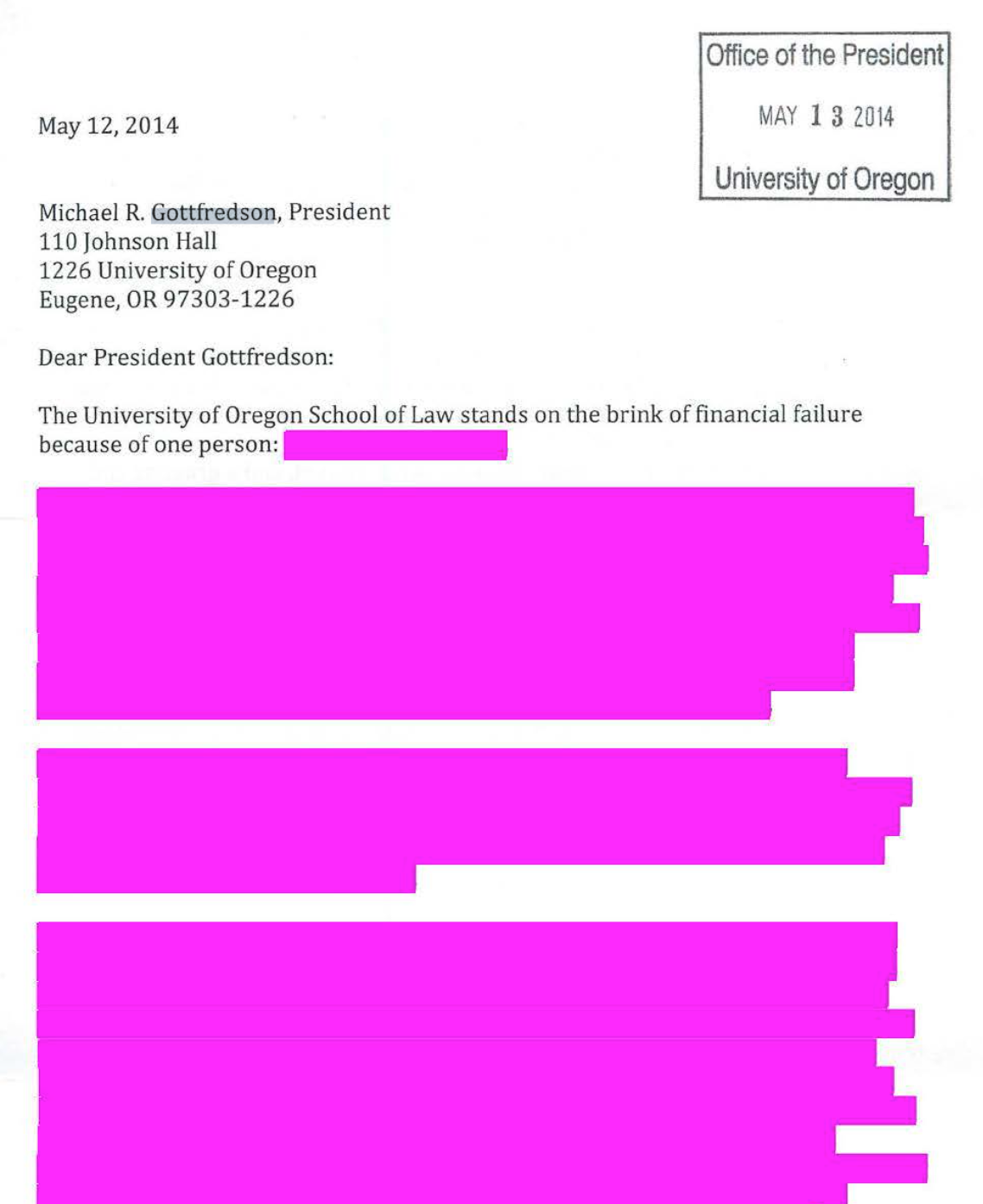 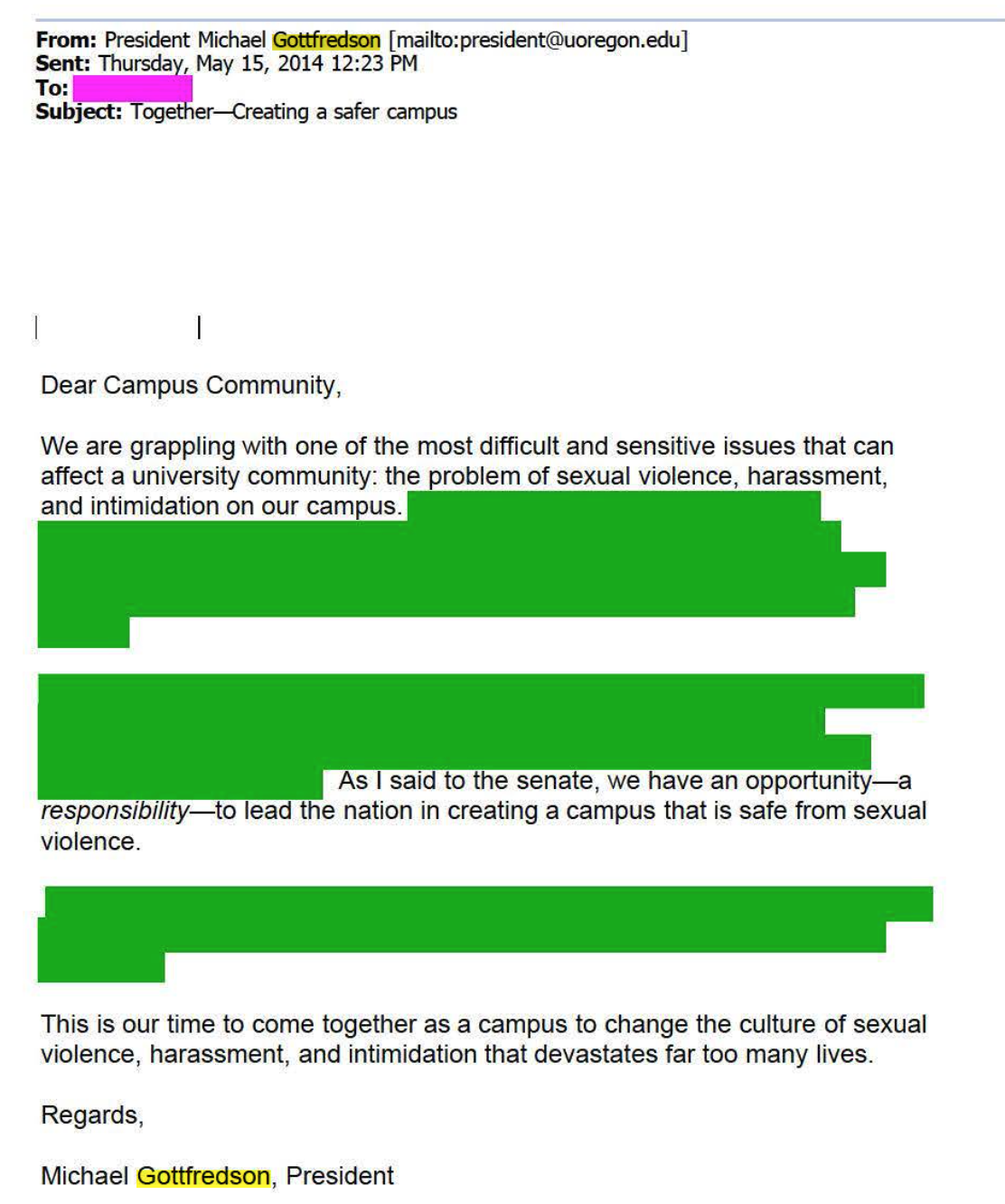 But the best I’ve found so far has to be this unredacted note from Sharon Rudnick to Mike Gottfredson, congratulating him on hiring HLGR to negotiate against the UO faculty union, hoping he’ll do it again, and thanking him for the bourbon: 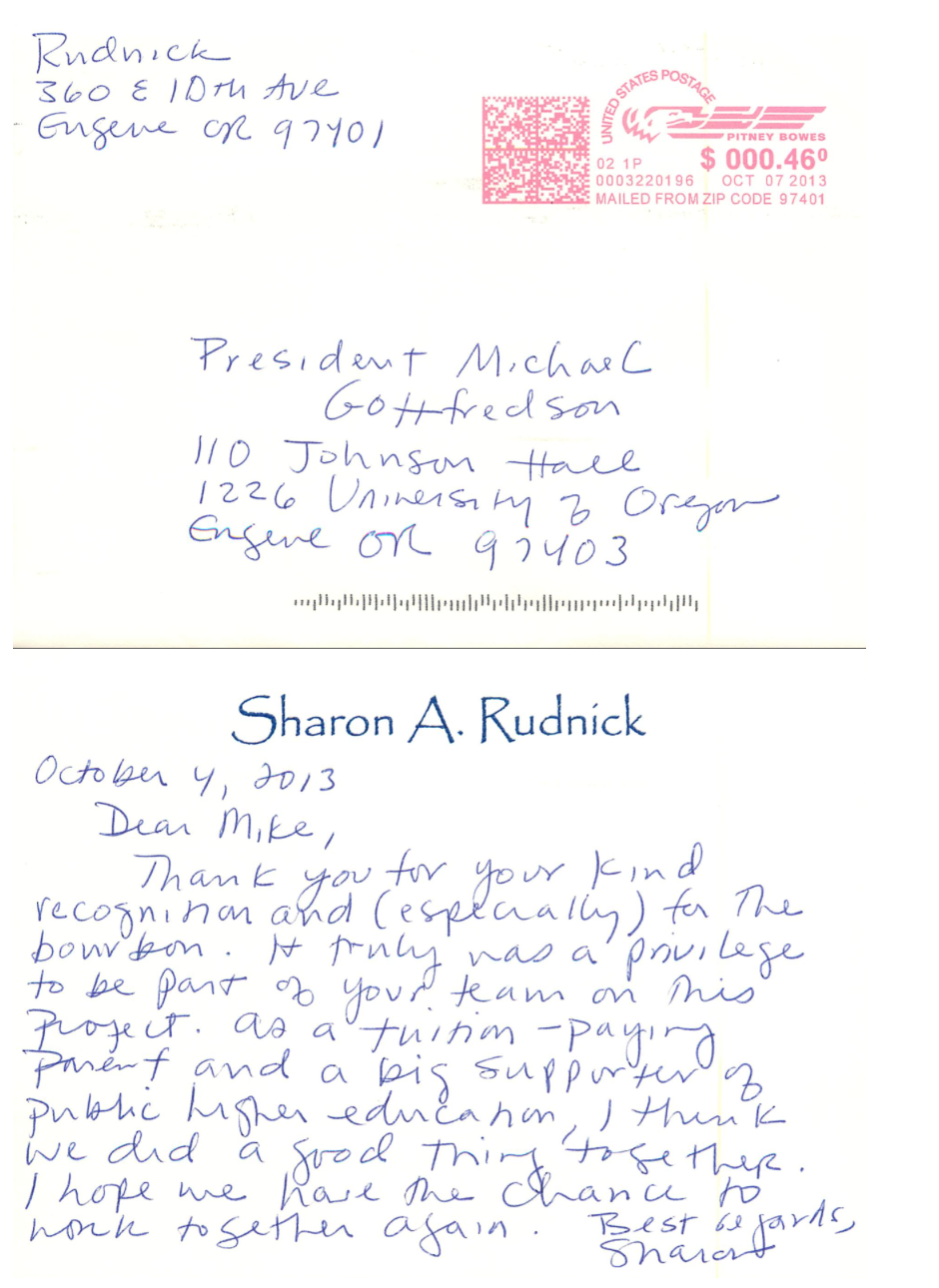