The agenda is below, I’ll try and live-blog some. Video here. The IDEAL framework is UO’s latest attempt at a diversity plan. Read it.

In other diversity news, UO’s former Diversity Director Charles Martinez will be at the Eugene City Club on Friday, with a panel of UO minority student leaders. Looks very interesting, follow the link for more information and bios.

The Neglected Few: Students of Color and Their Experience on the UO Campus

This panel of University of Oregon undergraduate student leaders represents diverse organizations dedicated to supporting students of color on campus. The groups serve as hubs for students of color to meet and plan events and programs that advance efforts to educate the community about diversity on campus.

The first questioner will be Dr. Charles Martinez, Department Head and Professor for Educational Methodology, Policy, and Leadership, University of Oregon.

And an anonymous reader points us to this National Review report mocking UO students for debating the MLK quote in the EMU. I wonder what William F. Buckley thinks about the fact that the magazine he founded is now posting click-bait that ridicules college students for debating serious questions about race and gender?

Fortunately UO student reporter Macy Hyland has a more intelligent article about the debate, in the Daily Emerald here:

Laurie Woodward, the Director of the Student Union said that when she approached the union with the question of if they wanted to keep the current MLK quote or supplement a new one, one of the students asked, “Does the MLK quote represent us today?”

… Woodward says she has no idea if the quote will change again in the near future, but she’s merely excited that important discussions like this are being held on campus again. “What words are is important,” she says, “but what’s more important is that people think about what the words should be.”

Colin Koopman (Philosophy) worked with Will Laney from IT and a Senate workgroup to revise the original emergency policies, which had some issues, particularly regarding administrators access to faculty and staff emails.

Q from Ahlen: Impetus was an incident regarding admin access to staff emails. SEIU cannot consent to this policy as is. Taylor explains that the impetus was that, during a union grievance, an HR employee authorized full read-write access to the employees email by an administrator. SEIU won the grievance, and we need to have that codified before we endorse this policy.

Laney: I agree we need to have this in the procedure, GC’s office tells me they will have a draft of that tomorrow.

Taylor: We need to have language requiring a “compelling business need” to access employees email.

And things get interesting …

Koopman: We can pass these as policies now, and if the procedures then do not come back with email protection you can come back to the Senate.

The original policy came to us via OUS and Chuck Triplett, and was pretty bad. Randy dropped all their language, and wrote this. I’m no ethicist, but it’s a huge improvement.

Here’s a link to the final version of UO’s 2006 Diversity plan. This was sent to the Senate by President Frohnmayer and approved after a contentious set of meetings, during which it came out that the administration had agree to hire a diversity director and prepare a diversity plan as part of the legal settlement with Joe Wade, an African-American administrator who had sued Frohnmayer and Provost John Moseley for discrimination in hiring. Frohnmayer had kept this hidden from the faculty and even from the person he hired as Diversity Director.

That diversity director left, and was replaced by Charles Martinez (Education). After faculty complaints about the text and the process, Martinez heavily revised the plan and Frohnmayer brought it to the Senate. There was a healthy debate, the minutes are here. One snippet:

Senator Chris Ellis, economics, then rose to oppose the motion. He felt everyone in the room believed diversity was a good thing because they cared about some of the underlying problems in our society. However, Senator Ellis felt that the current plan was fundamentally and logically flawed, and as such, could not achieve its goals. He noted that there was a large body of literature on the economics of education and he introduced some issues raised in that literature. One issue is that economically disadvantaged people historically do poorly in education, and Blacks and Hispanics have been historically poor, thus there are not enough persons in these underrepresented groups to fill the “pipeline” to become college undergraduates and graduates from which to make hires. He suggested the proposed plan does not address the pipeline issue. He concluded by noting that there is a large bureaucracy with a large budget devoted to diversity already, and he was concerned about resource questions. He proposed putting our resources into resolving the pipeline issue.

The plan was approved. It included a very expansive definition of diversity, and explicit recognition that “diversity of thought” was of primary interest to the university, given our academic mission. Income and class and political beliefs were also included: 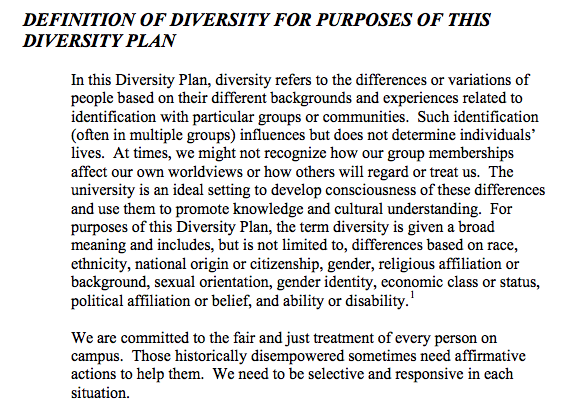 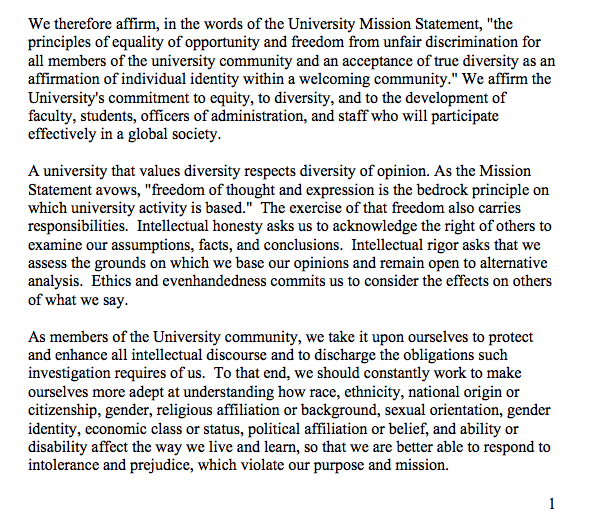 The language in the newly proposed 2015-16 diversity plan, here, is much less inclusive, focusing on race and ethnicity, gender, sexual orientation, and disability status: 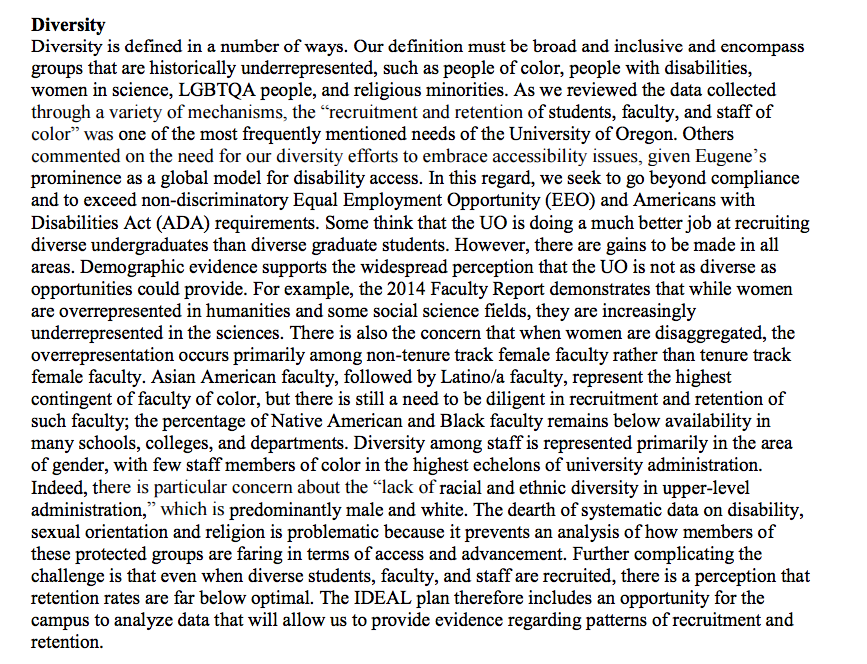 Sullivan: I asked VP Alex-Assensoh what the Senate could do to help with diversity, she asked us to get involved in the IDEAL process.

More on the OEI page here.

Psaki: Concerned about the faculty review part. During bargaining, the faculty union was concerned that some faculty, particularly women and minorities, where not being recognized or rewarded for their work on equity and inclusion. The union and the administration agreed to language on this. In contrast this plan imposes a new unfunded time-mandate on all faculty, which was explicitly not part of what we agreed to.

Sullivan: The Senate will post this plan for discussion, and this is an example of the sorts of issues that should be raised.

We’re wasting way to much faculty, staff, administrator, and Senate time looking at policies and not enough on our core academic mission. [A cynic might say this is exactly why the board and administration decided to do policy-by-policy review.] Randy has some plans to speed things up and get us back to the basics.

IFS is the umbrella organization for Senates from Oregon publics. After Lariviere’s firing, it was Join or Die. We joined, and now it’s great to know Kyr will be coordinating.

61% more Student Credit Hours, 7% more TT Faculty. Hmm. 100% more NTTF, but that was from a base of 1. So be careful interpreting these figures for your own department.