The UO Divest students gave a report on the goals of their sit-in, and reported that the administration has removed their divestment banner from the bush outside JH, claiming it was a “structural element”. This seems like an obvious violation of UO’s free -speech policy and the careful language in the Facilities Use Policy that the Senate negotiated with Lariviere in 2010.

4.1     US15/16-21: Revision of the Code of Ethics in Response to Feedback from the University President; Senate Executive Committee

Live blog: Schill’s not sure why we are bothering with this either. Something we inherited from OUS and it would look bad to ditch it. We then proceed to debate the Public Accountability clause and “inclusivity”. Someone tries to add the dread word “collegiality”. Harbaugh objects unless it specifies “collegiality as defined by New York City best practices.” Collegiality fails. Freyd proposes a simplifying amendment to delete everything after the second period. Passes. Harbaugh moves to change “ensures” to “requires”. Schill agrees. Amendment passes. The Godless UO now has a code of ethics, though the administration reserves the right to take another look.

Yes, AVP for Collaboration Chuck Triplett has brought this back to us once more, for still more debate. And he tells people it’s the *Senate* that wastes time on pointless unenforceable motions? It seems someone in JH has taken a red pen to the public accountability language:

But our administrators have no problem with this language in the UOPD’s ethics policy:

Is there none righteous among the Senate, not one, with the stones (or ovaries) to propose an amendment adding God to the UO ethics policy? I’ll second, I swear (or affirm) to it.

OK, so we’re all atheists, just as Ben Carson thought. Well how about sustainability then? Even the godless worship sustainability. Maybe especially the godless. But Triplett’s Policy Advisory Committee is proposing repealing UO’s policy on sustainability, which we inherited from Pernsteiner and Triplett from back when they ran OUS, and before they ran Lariviere out: 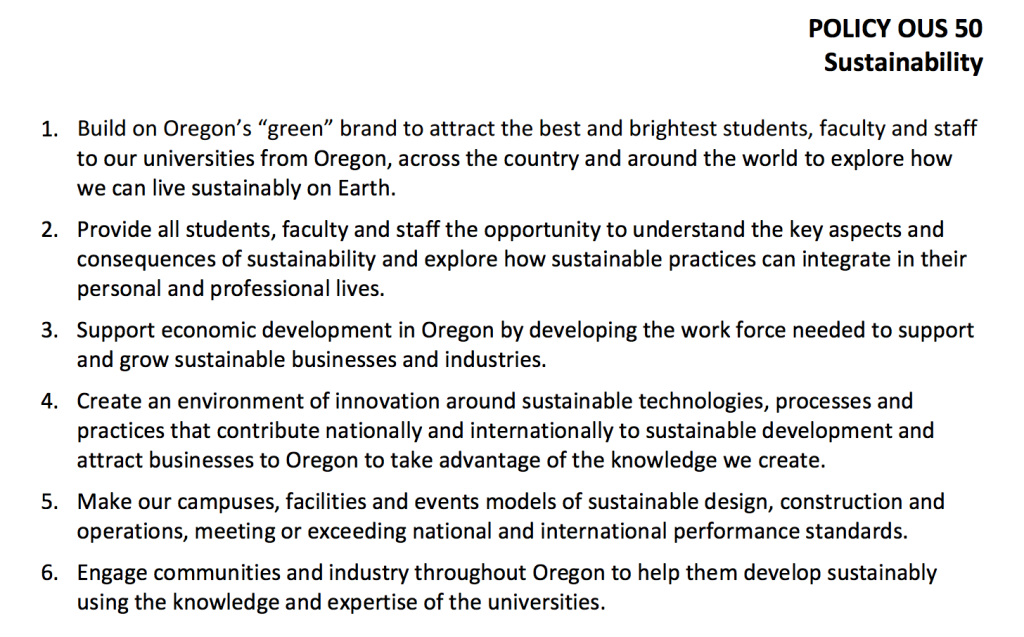 While I don’t doubt that UO’s “green brand” brings in more good students than the Duck’s party school reputation, I’m all for ditching this vacuous policy about “how we can live sustainably on Earth.” Instead we should should support our UO Divest students, who have a practical, well thought out program for reducing CO2 emissions through collective action, which they are working hard to implement.

Provost Scott Coltrane has appointed VPAA Doug Blandy of all people to lead a task force on online education, but his task force has just begun meeting, and he won’t share the schedule or agenda. Instead this proposal comes from the Academic Council. It does not attempt to deal with cheating or grade inflation in online courses, or evaluate what students might learn from these courses. Instead it’s all about regulating faculty inputs. 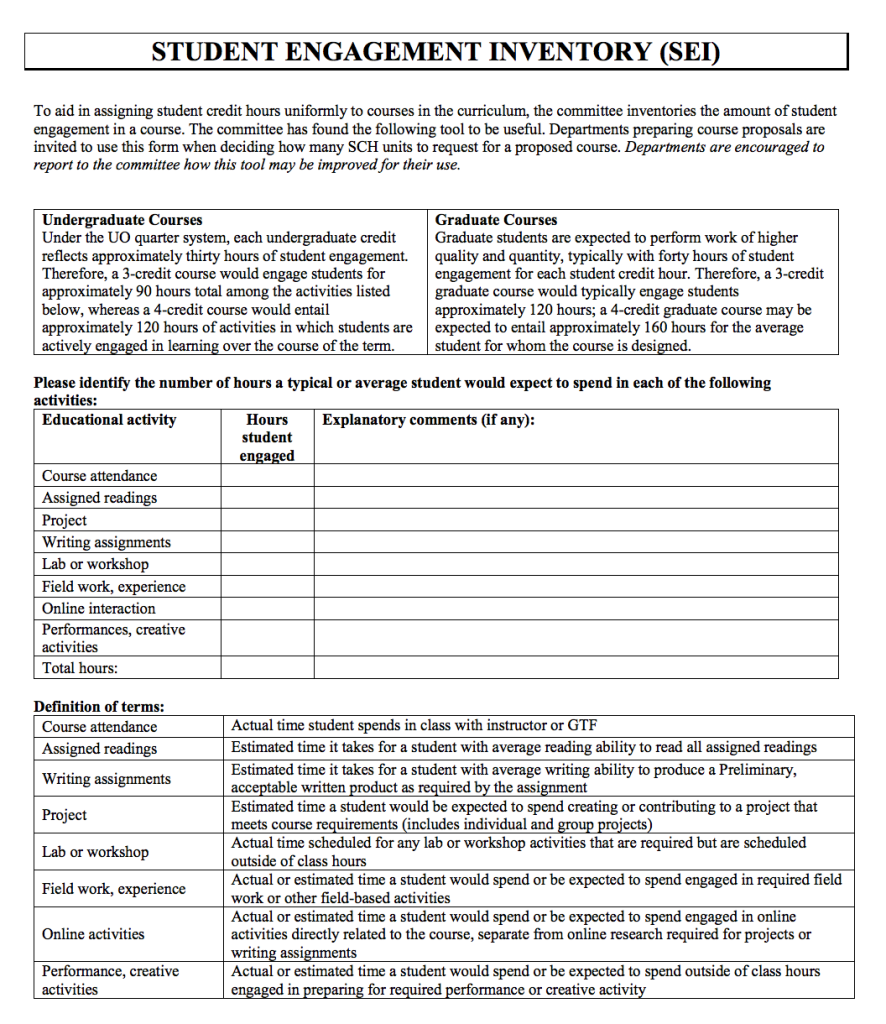 White explains the impetus from this proposal: students were complaining that some online classes consisted of nothing more than video lectures and a final exam.

Koopman asks why the policy does not provide more guidance on what is meant by engagement – instead of defining it as what it’s not.

White: We are working closely with Doug Blandy’s task force to provide more examples in the SEI and other documents. Doesn’t want to give faculty language they can just cut and paste into a course proposal.

Wolverton: Agrees with Koopman, thinks there should be more guidance in the policy. 2.1 should reference the SEI. Furthermore, the SEI tracks *student* engagement, this seems focused on faculty workload.

5.1       Proposed Mandatory Live In policy for all new incoming students.

Last meeting we had to cut this very interesting student-led discussion off early, for lack of time.

Apparently VPSL Robin Holmes was not prepared to continue discussing the Mandatory Live On Policy for freshman that came up last month.

Senators ask whether or not this is just a delaying tactic on the part of VPSL.  Say it ain’t so!

Two UO Divest students, Joey and Nicole report on the progress of their JH sit-in and protest, aimed at encouraging the UO Foundation to divest from those fossil fuel companies that still haven’t gone bankrupt.

The students report that, after 8 weeks of their JH sit-in, the administration has been removed their banner from outside JH.

Students: They told us that we couldn’t even stand there, because that made us “structural elements of the building.”

Senator: There have been many other banners on Johnson Hall over the years, including one celebrating the last capital campaign. Sounds structural?

Harbaugh: In 2010 the Senate rejected GC Randy Geller’s attempt to write a policy that would allow the administration to remove your banner. Perhaps the Senate should revisit this

Sullivan: Can faculty help out with the sit-in?

7 Responses to Senate meets Wed 3-5PM to weaken godless ethics policy, regulate faculty inputs to online classes, and then listen to our students if time permits