Coltrane recently gave business school dean Kees de Kluyver a remarkably generous golden parachute – 1/2 a Gottfredson, more or less. Will that now be the precedent for Coltrane? Presumably he’ll get a well earned sabbatical year – but at his professor’s salary, or his provost’s salary? The difference is enough to fund a lot of merit scholarships: 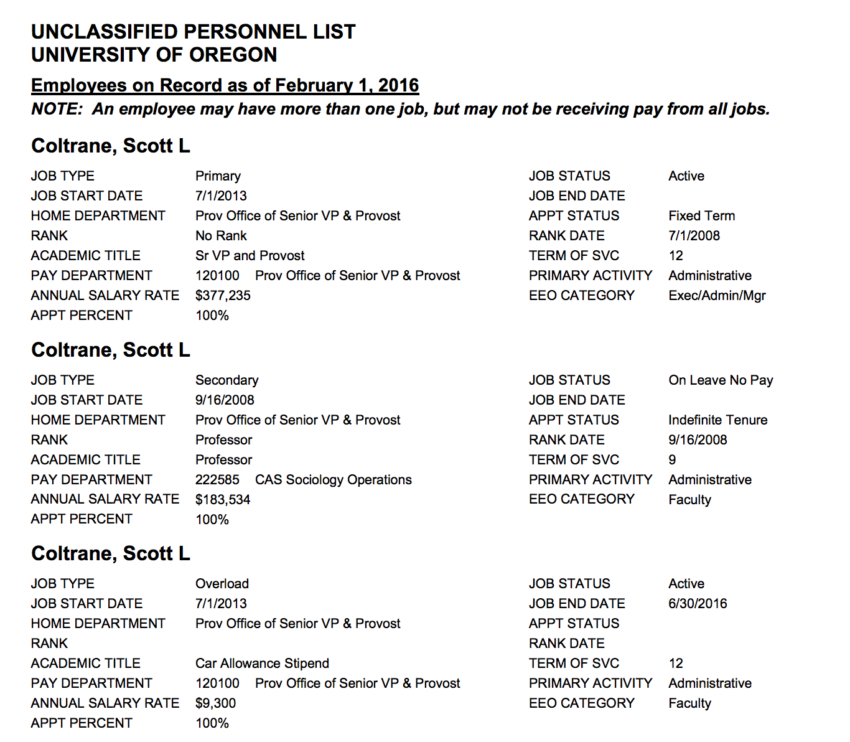 Over the last few years, as the University of Oregon weathered some tumultuous times, Scott Coltrane has stepped up time and time again to provide clear vision, strategic leadership, and a welcome sense of calm. He has worn nearly every academic leadership hat there is at the UO—dean of the College of Arts and Sciences, interim provost, provost, and interim president. The university community owes Scott a tremendous debt of gratitude for all that he has achieved since arriving on campus in 2008.

Scott recently told me that he plans to retire as provost on July 1, 2017. As a friend, I am sincerely excited for Scott and his family as he enters a new phase of life. As president of the UO, I will very much miss Scott’s wise counsel, his deep appreciation for and understanding of our faculty and all elements of our university, and his grace under pressure. He is the epitome of what a great provost and academic leader should be in today’s higher education landscape.

Scott helped lay a strong academic foundation here at the UO, which will benefit this university for many years to come. Most recently, he led the effort to hire three world-class deans and our new vice president for research and innovation. Over the next year, Scott will play a vital role in helping these new leaders find their footing here and ensure their smooth transition. In addition, Scott has been pivotal in helping us attract and retain a talented corps of academic and research faculty members, including those connected to the funded Clusters of Excellence. It is impossible to overstate the positive impact of these hires on the future of the UO.

In addition, Scott oversaw the completion of our strategic framework, championed diversity and inclusion on campus, launched the public phase of our current campaign, served as a tireless and successful fundraiser, helped the university enhance its Title IX policies, and improved the UO’s focus on issues related to student success. As dean of CAS, he successfully guided the college through a time of tremendous growth, established several new majors, created new quality metrics, and reorganized the dean’s office. He accomplished all of this while maintaining his academic and research standing as a sociologist.

Perhaps the most important thing Scott has done for our university is the thing he was not hired to do. Not long after Scott was permanently hired as provost—a job his entire career prepared him for—President Gottfredsen’s term in office came to a premature end. Scott stepped in without a moment’s hesitation. His leadership, intelligence, and decency calmed our university and made it possible for me to get a good start this past July. All of us can be truly grateful to Scott for his service and his love of this institution.

Please join me in wishing Scott the very best in retirement. As is tradition in academia, Scott will not be heading off into the sunset immediately. We will have plenty of time during the coming year to properly celebrate his accomplishments and contributions to the UO.

In the meantime, we will launch a national search for a new provost and start the necessary planning to ensure a smooth transition. I am delighted that Geri Richmond, Presidential Chair in Science and professor of chemistry, has agreed to serve as chair of the search committee. We will share additional information about our plans in the weeks and months to come.

President and Professor of Law