This Comedy Central show starts with some statistics on college sexual violence, including the finding in a recent NBER working paper that reported rapes of college age women increase 41% on football home-game weekends.

Brenda Tracy then recounts the story of her 1998 gang-rape by Oregon State football players, explaining the pressure brought on her to drop charges, given that OSU was trying to raise money for a new football stadium. Tracy then introduces a campaign to try and get the NCAA to ban violent athletes, and the emcees explain the expected value calculation that has led so many colleges to hide rapes by revenue-sport athletes, and then introduce UO’s putative new mascot, Shushy the rape-ignoring ostrich: 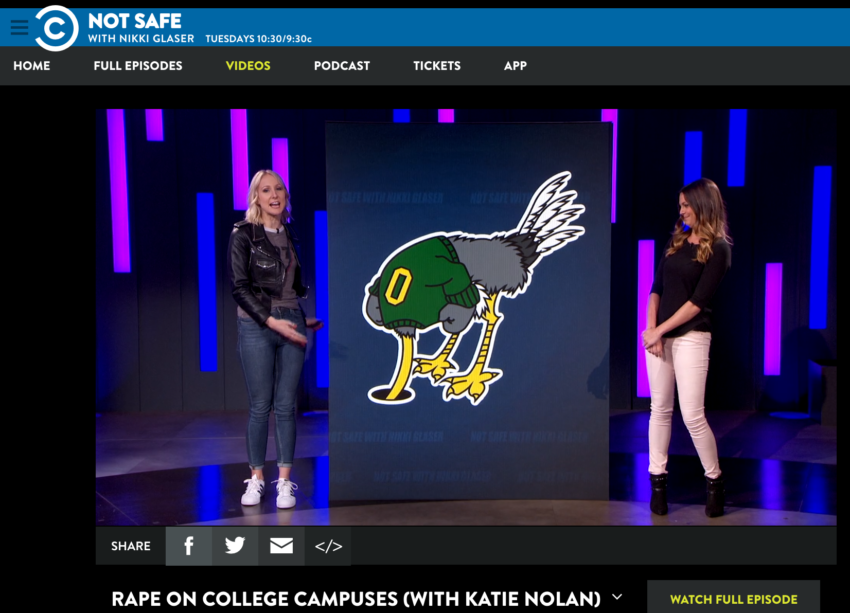 This is arguably unfair, given that Tracy was raped by student-athletes from Oregon State, not UO. But then Duck fans can hardly complain, given that President Gottfredson’s administration did its best to keep the March 2014 gang-rape allegations against three of coach Dana Altman’s basketball players secret until the players could be quietly transferred away to other unsuspecting campuses, as the documents in their lawsuit against UO demonstrate. (Docket here, correspondence between Altman’s recruit’s attorney and current UO Deputy General Counsel Doug Park, showing the agreement to keep the nature of the accusations against the player off his transcripts, here.)

I have a few issues with the expected value comparison of the costs of rapes and the benefits of football revenue that the show presents. Setting aside the issue of the non-pecuniary costs, the emceee’s state “If [the expected value of legal settlements for rape victims] is less money than the money generated by your football program then it’s more cost-efficient for you to just convince these co-eds that they were never raped.”

However, this math ignores the fact that the profits from big-time sports goes to the coaches, athletic directors and NCAA leaders like Mark Emmert, while the costs of the legal settlements are typically paid by the universities. The downside risk to coaches who tolerate rapists and alleged rapists seems to be small. For example, Mike Riley, who was OSU football coach when Tracy was raped, gave the two players one-game suspensions and appears to have lost nothing by that decision, being hired by OSU for a second stretch in 2003. The Duck’s Dana Altman will presumably receive a fat raise when his current contract expires, despite his decision to not ask any questions about why one of the alleged rapists, whom he recruited to UO as a transfer, had been suspended by his previous university for an entire year.

Diane Dietz has more on Shushy here, including the inevitable quote from self-described Duck advocate and PR flack Tobin Klinger.