The recent history of UO’s Office of Research is a troubled one, as has been true of most of the UO administration. Who can forget Interim Provost Jim Bean’s hire, VPRI Kimberly Espy? It took the threat of a Senate vote of no confidence and an investigation led by Bruce Blonigen to get her to leave.

In contrast, President Schill’s new VPRI David Conover seems to be off to a good start:

A Message to the UO Research Community
David O. Conover

Last week I was honored to begin my new role as the University of Oregon’s Vice President for Research and Innovation. This is an outstanding institution with amazing faculty and committed leaders who are accelerating the trajectory of the institution during a transformational time in its history. The VPRI’s office will play a critical role in fulfilling President Schill’s vision to enhance and expand UO’s research portfolio. I very much look forward to working alongside all of you in fulfilling our mission of discovery, teaching, and service.

I’d like to thank Brad Shelton, who took on the role of Interim Vice President for Research and Innovation for two very critical years. Brad’s service to the university has been exemplary, and I thank him for the advice and support he’s provided to me during the transition.

What most inspires me about this position is the opportunity to be immersed in the exciting research and creative activity taking place across so many disciplines — from the social sciences to the natural sciences to the humanities. I’m excited to learn more about your work, and I’ll be doing so while thinking about how we can leverage our strengths. Given the competitiveness of the research funding environment, it’s important that we work collaboratively to broaden and strengthen our research impact. I aim to create even more partnerships across disciplines, schools, colleges, and other institutions so that we can work together to accelerate the advancement of knowledge and technological innovation.

Communication will be key to our future success. It is crucial that we share the value and impact of our work with the local community, the state, the region, and the world. So it will be a priority of mine to help those faculty and students who wish to share their research and scholarship with a broader public audience. We simply cannot afford to keep our stories of discovery a secret.

I believe in the power of research and innovation to make a difference in people’s lives by improving human health, strengthening the economy, and addressing the grand challenges that society faces. I am thrilled to be leading this effort as your VPRI. Your accomplishments tell the story of research and innovation at the University of Oregon. Together, we can build upon UO’s proud tradition of excellence in research, scholarship, and creative expression.

Under Espy, every UO press release on research, scholarship, or creative expression had to include her name and title somewhere in the text. It drove the press office nuts. Someone even published a peer reviewed empirical piece about it:

Author: No way I’m telling, she controls their budget and their future.* (*The author would like to thank VPRI Espy for her invaluable role in this study.) 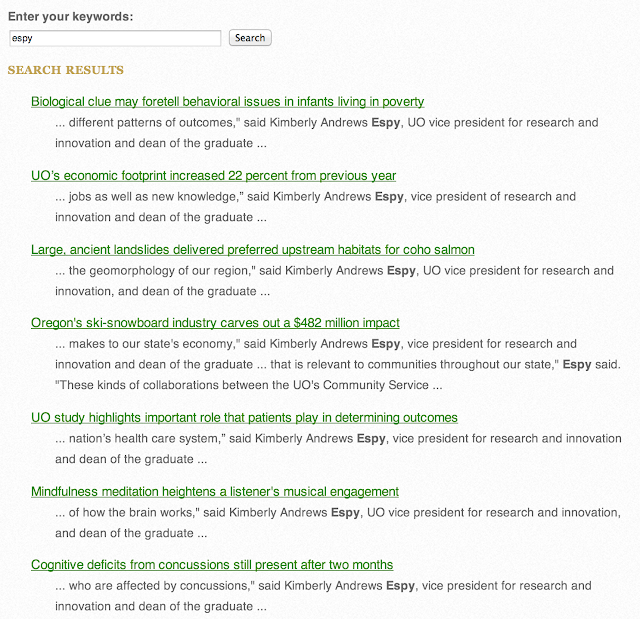