8/9/2016: Her offense was the unforgivable one for an administrator: Making the boss, in this case UC system President Janet Napolitano, look stupid:

The report strongly disputes Linda Katehi’s repeated assertions that she was not involved in contracting with private companies to improve Davis’s online image and her own, both of which had been badly damaged by the pepper-spray incident five  years ago. In conversations with Ms. Napolitano and interviews with the news media, the report states, Ms. Katehi “minimized her knowledge of and role in” the process. When Davis’s social-media efforts received negative attention from the news media, which suggested that the chancellor hoped to scrub from the internet information that was personally damaging to her reputation, Ms. Katehi told the president she “had nothing to do with the contracts, and that they were all handled by the UC Davis communications,” the report states. She made similar statements to The Sacramento Bee and The Chronicle of Higher Education. “The chancellor’s statements,” the report concludes, “were misleading, at best, or untruthful, at worst.”

… The report, which redacts some names, cites an unnamed person’s recollection that the chancellor “voiced frequent concerns” about her personal Wikipedia page and asked, “Why can’t you get me ‘off the Google?'”

Hey, it’s not like she paid a former journalism dean and strategic communicators to help write an anonymous letter on university letterhead attacking a professor for being “anti-university”.

I received an email from VP for Communication Kyle Henley about my statement below regarding using the UO Foundation to hide public relations spending. He wants to make it absolutely clear that, on his watch, UO will not do what UC-Davis did. I’m glad to hear that, and given his work getting rid of 160over90 and remaking “Around the O” into something worth reading for information rather than laughs, I believe him. He also said that his office is not running any communications contracts through the Foundation, and that UO now has only a small $5-10K contract with Anna Richter-Taylor, to help write a crisis communications plan – which he offered to provide.

Obviously I agree that UO needs a crisis communications plan. But Anna Richter-Taylor seems like just the sort of person *not* to help write it, given how badly UO botched past crises, when she was consulting for us. And while I’m happy to hear that Henley’s office is not using the UO Foundation to hide communications or PR spending, the Foundation has been very active in promoting the IAAF championships and lobbying for the subsidy for them, as can be seen from the many Paul Weinhold emails. This is not to say that Henley has been involved in this, and I apologize if that was not as clear as it should have been.

Henley also objects to my characterization of Tobin Klinger as a “PR Flack”. I’m sorry, but I routinely hear reporters use that phrase – and far less complementary ones – to describe Mr. Klinger. One very experienced and professional public relations person told me “I hate it when you use the F word. But you’re right.” Klinger has burned his bridges with the university community and the Oregon press and public, and the sooner the UO administration accepts that and moves on the sooner they will be able to rebuild trust. Boy did that not work out well for Chancellor Katehi. The NYT weighs in with additional ridicule here. The SacBee has the report and the public records, here:

UC Davis contracted with consultants for at least $175,000 to scrub the Internet of negative online postings following the November 2011 pepper-spraying of students and to improve the reputations of both the university and Chancellor Linda P.B. Katehi, newly released documents show. The payments were made as the university was trying to boost its image online and were among several contracts issued following the pepper-spray incident.  Some payments were made in hopes of improving the results computer users obtained when searching for information about the university or Katehi, results that one consultant labeled “venomous rhetoric about UC Davis and the chancellor.” Others sought to improve the school’s use of social media and to devise a new plan for the UC Davis strategic communications office, which has seen its budget rise substantially since Katehi took the chancellor’s post in 2009. Figures released by UC Davis show the strategic communications budget increased from $2.93 million in 2009 to $5.47 million in 2015.

The pepper spray incident is in noted contrast to what happened at UO, where Dave Hubin (one-time UC-Davis student body president) was able to calm down the UOPD and persuade the Occupy Eugene protesters to peacefully leave campus. In the end Dave didn’t even need to take up former Chancellor George Pernsteiner on his gracious offer to let them stay with him at Treetops.

But UO has had its own PR problems. How much have we spent managing them? The number I have for Anna Richter-Taylor and Gallatin Public Affairs is $365,014, but the invoices Public Records provided are astonishingly vague, and presumably JH is now running this sort of thing through the UO Foundation to keep it hidden. (Which wouldn’t work in CA, where university foundations must obey the public records law.) And of course UO spent millions on 160over90, before President Schill shut them down.

Tim Gleason, former Journalism Dean, got a cut too, in part for helping write this unsigned letter accusing me of being “anti-university”. It took many public records requests before he finally fessed up. 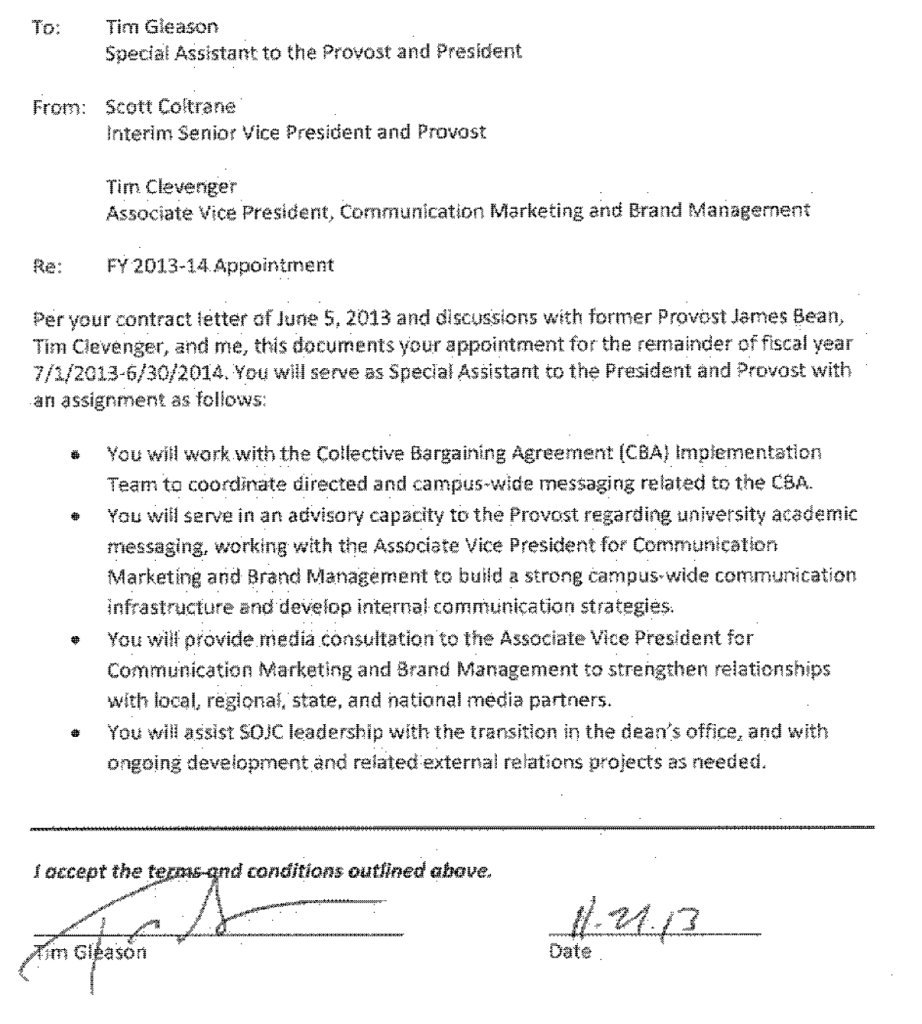