UO students would rather do homework than watch Duck football

10/30/2016: First it was the survey revealing that students cared more about UO’s Urban Farm Program than big-time college sports. Now, according to sports reporter Kenny Jacoby in the Daily Emerald and his report on the brief student turnout for the Arizona State game, the list of things our students prefer to watching the Ducks has grown to include a nap, Halloween, and yes, homework:

Oregon was winning 30-22 when masses of students started heading for the exits. I was curious why they chose this point in the game to leave, with the Ducks on the verge of their first win since Sept. 10. So I went down to the concourse level, stood at the top of the stairs above the South Gate and asked departing students why they were leaving. Here are some of their responses:

“I’m really, really high, and I want to lie down,” the first student said.

“We’re tired from last night. We’re trying to nap and recover before going out to tonight. I just turned 21.”

“We’re tired. I have homework to do.”

Which does raise the question of why the ASUO is paying Rob Mullens, Eric Roedl and the Duck sports enterprise $1.7M for “free” tickets. More on that here.

And, according to the NYT, it’s part of a movement. UO’s Landscape Architecture department is now running two sections, just a few slots left:

Update: While student attendance at basketball games is dropping (one report says the student section was about 40% full at the last basketball game) interest in the Urban Farm seems to be growing. Makensy Venneri has a timely story in the ODE, here. The 2011 ODE story on the decision to put an athlete-only parking lot on land that could have been used for the farm is here. 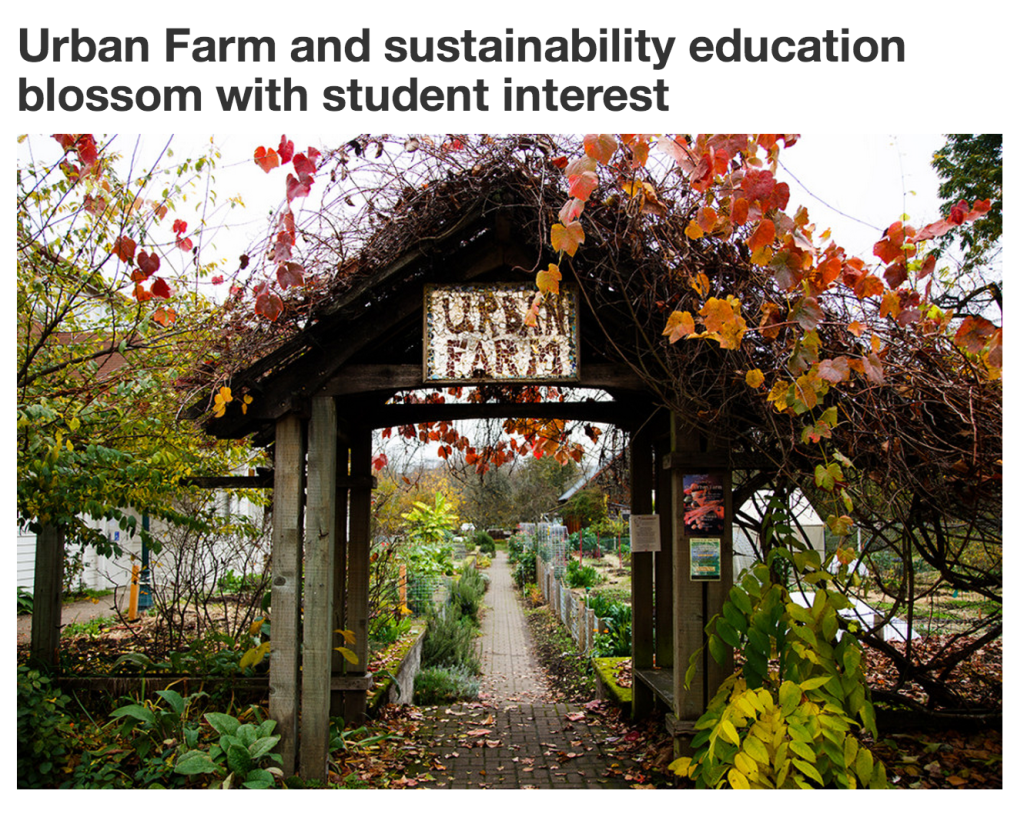 Update: There’s an article about this post in the Oregonian here, many comments, some interesting.

Athletic Director Rob Mullens, his well paid hangers-on, and those admin junketeers like to claim big-time sports is a big draw for students. But according to the data, it ranks down there with our urban farm and recycling program: 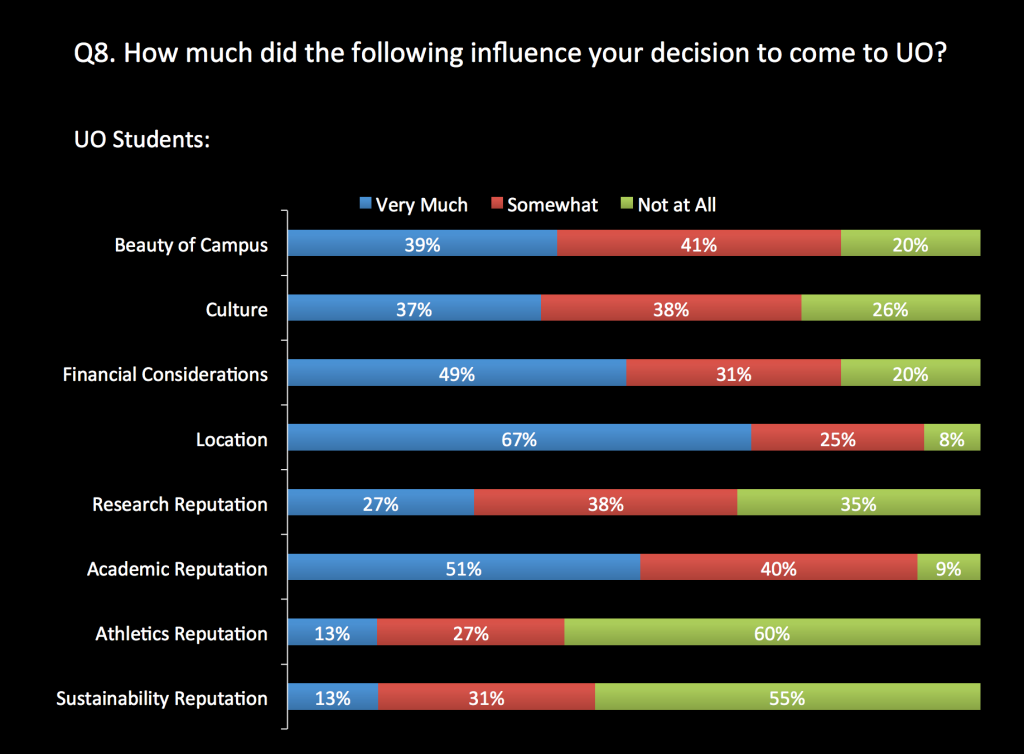 And these are the answers from students who came to UO. I wonder how many good ones got driven away by UO’s big-time sports hype? From a 2013 survey by UO’s sustainability program, here. Thanks to a vigilant reader for the link.

In addition, faculty, staff, and students all agree that winning games should be UO’s lowest priority. Unfortunately they didn’t break out the results for the administrators that set UO’s athletic subsidies, but their revealed preference choices are pretty obvious. 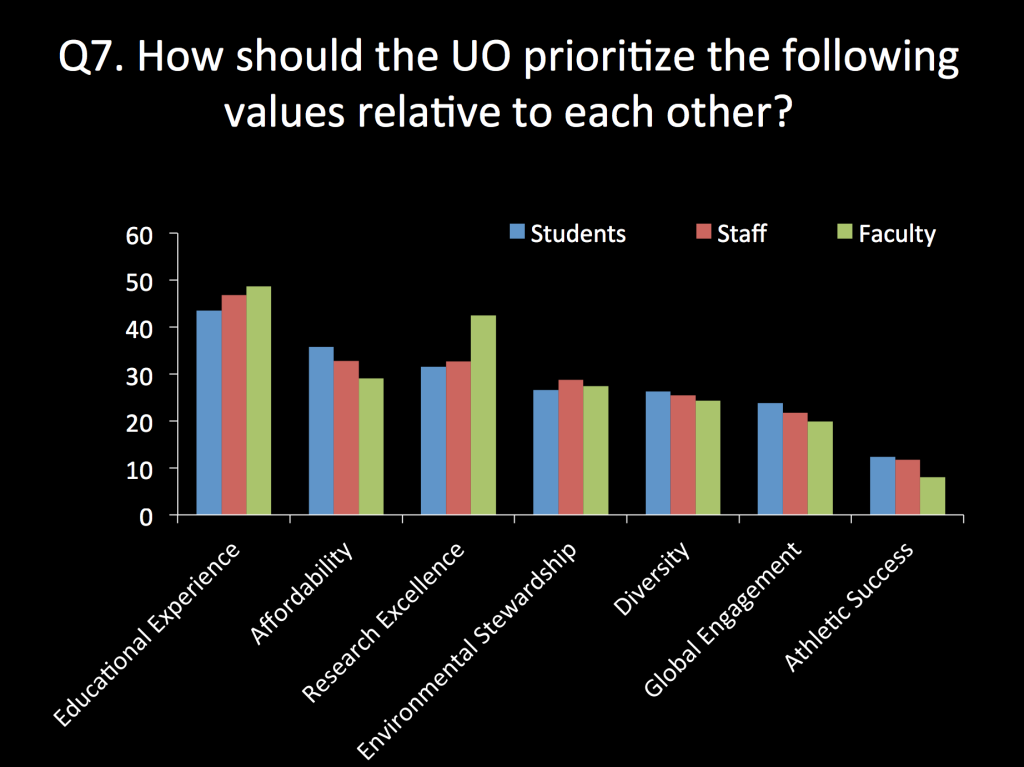 7/22/2014 update: College students losing interest in football hype The WSJ has the story on falling student attendance, even when tickets are subsidized with mandatory student funds, as at UO. Let’s not even talk about basketball. Meanwhile all sections of UO’s popular Urban Farm course are already full for fall. Administrator demand for free bowl game junkets remains at historically high levels.

8/4/2014 update: “Urban Farming”. Oh, I get it now. The RG has the news, from the prestigious sounding Princeton Review.