Dylan Darling has the latest in the RG here:

Police at a small college in Wyoming have closed a sexual assault case involving a member of the University of Oregon’s Final Four basketball team and no charges will be filed. …

Presumably this means the UOPD and NWCCDPD police reports will soon be released.

6/22/2017 update: And don’t get me started on their grammar. I’ve made a few notes on the response below, the official version is posted on Around the O:

In most cases involving accusation[s] of sexual assault, it is impossible [perhaps you mean to claim it is illegal?] and inappropriate to publicly disclose details to protect the rights of victims [and yet police departments and prosecutors do this all the time by using pseudonyms – see for example the Jane Doe documents for the last basketball rape allegations] and those who report violations under Title IX, to comply with federal student privacy laws [say, don’t athletes have to sign the FERPA release?], and to provide those accused with appropriate due process. [Uh, so then why did the UOPD (eventually) release the police report to the Emerald? See it here.]

This was a scenario [scenario is the word when you’re play-acting crises and responses, not when you’re responding to an actual event] that stemmed from a law enforcement inquiry by the Northern Wyoming Community College [District] police.UO police have no jurisdiction in Wyoming, [thanks, good to know] and it would be inappropriate for the UO to provide details on an inquiry led by another law enforcement agency. [Even if doing so might protect UO students? Did the UOPD ask the NWCCDPD if they cared?]

Information detailing allegations was not shared with the coaching staff to protect [the] integrity of the inquiry. [We can understand why the UOPD wouldn’t trust Dana Altman, but why wasn’t it shared with AD Rob Mullens and President Mike Schill? Does the UOPD not trust them either?] The Department of Intercollegiate Athletics’ only role was to provide contact information for the player and to coordinate with the university’s Title IX coordinator. [What does coordinate mean here? Was a Title IX investigation started?]

University processes, then as now, involve communication between campus police, the Title IX office and athletics administration to determine whether there is a risk to the campus community that requires immediate action. In September 2016, there was insufficient information to warrant interim action. Since September, UOPD has received no further information or requests for assistance from the NWCCD police suggesting the inquiry had advanced in any way. [Did they ask? And did any new information develop? Was anyone alerted to look for it?]

Kavell Bigby-Williams played one season for the Oregon men’s basketball team, helping the Ducks to the Final Four in 2016-17. For the entirety of that season, he was being investigated for sexual assault by police in Wyoming for an incident that took place in September near Gillette College, the junior college from which Bigby-Williams transferred to Oregon.

According to a report by the Emerald’s Kenny Jacoby, a woman accused Bigby-Williams of sexually assaulting her at an apartment near the Gillette College campus sometime between 10 p.m. on Sept. 17 and 3 a.m. on Sept. 18, about a week before fall classes began at Oregon. The Northern Wyoming Community College District (NWCCD) campus police then began its investigation, which according to Jacoby remains open, though NWCCD police refused to comment about it. Bigby-Williams has since announced his intention to transfer to Louisiana State.

It remains unclear whether Ducks Coach Dana Altman, Athletic Director Rob Mullens or other school officials were aware of the specifics of the investigation. …

Reporter Kenny Jacoby has the latest in the Emerald, here:

Former Oregon forward Kavell Bigby-Williams played the 2016-17 men’s basketball season while under criminal investigation for an alleged sexual assault, the Emerald has learned.

… UO President Michael Schill did not know about the sexual assault allegation involving Bigby-Williams and declined to share his thoughts on it.

“I don’t have any awareness of that,” Schill said. “In any event, I can’t comment on an individual student. What if I was asked by another reporter about you being obnoxious? Would you want me to tell them that?”

… Bigby-Williams played 37 games for Oregon this season, averaging 9.8 minutes and 3.0 points. He played increased minutes off the bench during the Ducks’ run to the NCAA Tournament Final Four, after center Chris Boucher went down with an injury.

He recently asked for and was granted a release to explore a transfer to another school. On June 20, Bigby-Williams committed to transfer to LSU.

For the record I’ve had many conversations with Kenny Jacoby, and I’ve always found him to be polite, smart, calm, well-informed, and curious. I hope my saying that is not a FERPA violation, because I doubt that Emerald reporters sign the same release form that Dana Altman’s student-athletes must sign, before they can get their scholarships and play ball: 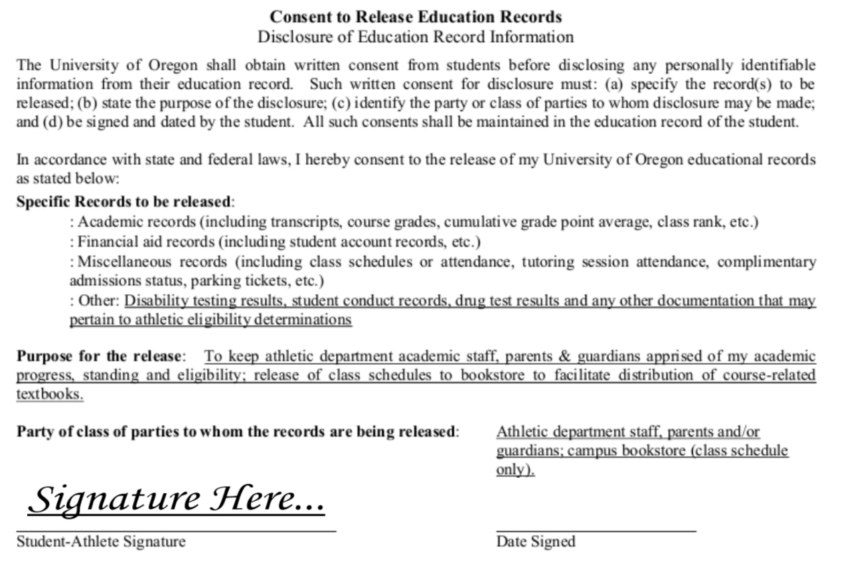