Call me a cynic, but it’s as if Trump’s AG Jeff Sessions is trying his best to destroy support for free speech among college students. That can’t be his goal, can it? What evidence is there, other than his lifetime of efforts to deny people their voting rights?

Speaking at Georgetown University’s law school, Mr. Sessions condemned the designated free-speech zones that have popped up on campuses across the country and seized on the case of an evangelical Christian student who had been restricted from speaking about his religion. He also sided with provocative writers who have been shut out at the University of California, Berkeley, which has been at the center of the debate.

“A national recommitment to free speech on campus and to ensuring First Amendment rights is long overdue,” Mr. Sessions said, addressing an audience that included students wearing tape over their mouths in protest of the Trump administration. “Protesters are now routinely shutting down speeches and debates across the country in an effort to silence voices that insufficiently conform with their views.”

Here’s Coretta Scott King on Jeff Sessions 30 years ago, when he was trying unsuccessfully to become a federal judge, outing him for his efforts to deny voting rights to citizens of Alabama: 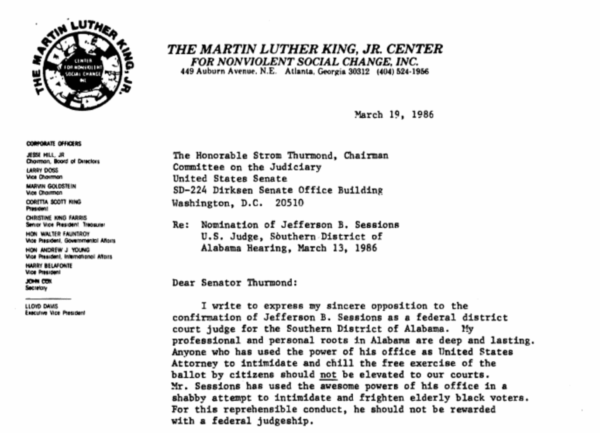 And here’s Martin Luther King’s last speech – on the importance of the First Amendment for what he was able to accomplish for America. He died for it the next day: