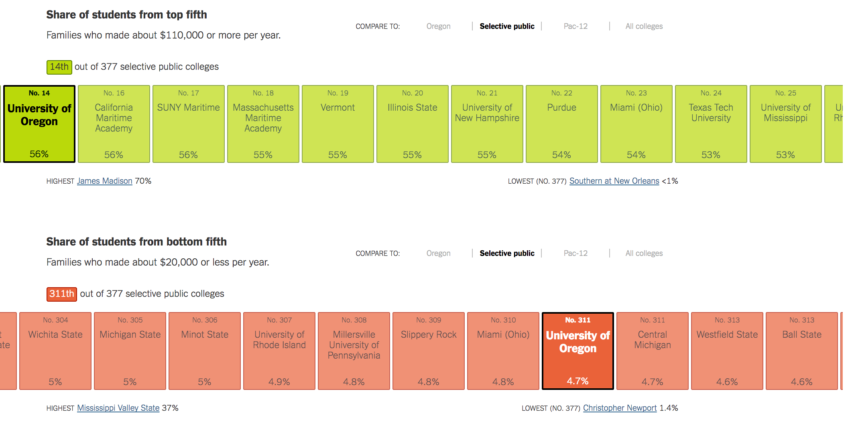 Our economic diversity has been getting worse over time (except perhaps for a small recent blip):

Despite this poor performance and the bad trends, UO’s long debates about diversity have generally ignored economic diversity. UO’s Institutional Research website has pages and pages of tables slicing and dicing UO’s students and faculty by every imaginable diversity metric – so long as those metrics are race and ethnicity or gender. The good news is that UO has improved markedly by all those measures over the past 10-15 years.

However, if you believe economic opportunity and diversity are important, you will have no luck finding that information on the IR website. If you go to UO’s Office of Equity and Inclusion’s “IDEAL Plan” you’ll find that the latest version now pays lip service to economic diversity, but you will not find a word about how UO compares on the relevant measures, or on the time trends. Similarly, the “Diversity Action Plans” that are now under preparation by every academic and administrative unit under the supervision of Equity and Inclusion have little if anything to say about economic diversity – it’s all race with a bit of gender.

Fortunately there is a new paper out with the data for UO and other colleges:

Unfortunately that paper makes it very clear UO is failing when it comes to promoting economic diversity. The figures at the top of this post come from the NYT summary for UO:

A new study, based on millions of anonymous tax records, shows that some colleges are even more economically segregated than previously understood, while others are associated with income mobility.

Below, estimates of how University of Oregon compares with its peer schools in economic diversity and student outcomes. 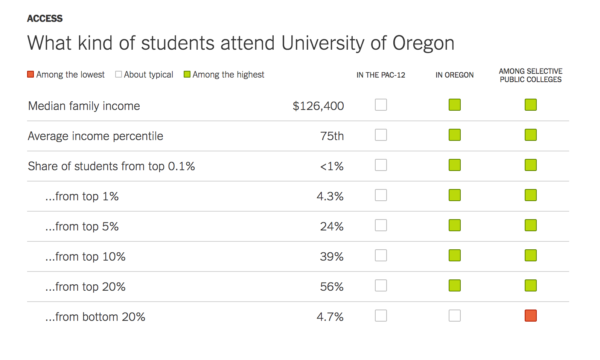 When it comes to economic diversity UO is near the bottom whether you look at selective publics, the PAC-12, or other Oregon universities:

It would be nice to believe that these sad results will help drive UO’s diversity debate and spending priorities for promoting diversity.

As explained below, colleges that are trying to pump up their U.S. News ranking have a strong incentive to cut back on enrollment of students from low-income families. The article blames this for part of the decline in intergenerational income mobility in the U.S. and the increase in inequality. (Although a similar pattern is apparent in, for example, Canada.) While the data is from 2013, and UO’s PathwaysOregon program has probably improved it, here is the comparison for UO and OUS (and other PAC-12 schools), on their impact on intergenerational income mobility:

Put simply, UO does not enroll enough low-SES students, and while it does raise the income of those who graduate substantially, it’s still not enough. The problem of where to find the money to do it is made worse by the fact that doing it would hurt our US News rank, and drive away the out-of-state high-SES students who help pay for low SES Oregonians.

America’s universities are getting two report cards this year. The first, from the Equality of Opportunity Project, brought the shocking revelation that many top universities, including Princeton and Yale, admit more students from the top 1 percent of earners than the bottom 60 percent combined. The second, from U.S. News and World Report, is due on Tuesday — with Princeton and Yale among the contenders for the top spot in the annual rankings.

The two are related: A POLITICO review shows that the criteria used in the U.S. News rankings — a measure so closely followed in the academic world that some colleges have built them into strategic plans — create incentives for schools to favor wealthier students over less wealthy applicants. …

Read it all. While the repeated attempts to make a Trump connection are a bit overwrought, the Georgia State story is really depressing – serving the middle class has cost them 30 points in US News.