No one who has ever dealt with a journal editor or reviewers will be surprised by any of this. At least they didn’t ask Schill to cite their own work, to pump up their Academic Analytics metrics.

Eugene Weekly reporter Corrine Boyer has obtained the public records on the back and forth between President Michael Schill and the NYT editors, over the op-ed he wrote after whatever happened at his October 17 State of the University that sort of didn’t happen. Story and links here.

President Schill seems to have written it all without help from UO’s army of PR flacks. This is unusual. Dave Frohnmayer had a speech-writer on staff. Mike Gottfredson paid a rumored $30K to a consultant for advice on how to talk to his own faculty at Senate meetings. And Bob Berdahl would have been well advised to have paid someone to edit his comments before he posted them on this blog. (Hi Bob!)

The EW story has a fair amount on the NYT editors’ efforts to influence Schill’s interpretation of events. It was Ms Shutler who pushed Schill to compare our students to fascists: 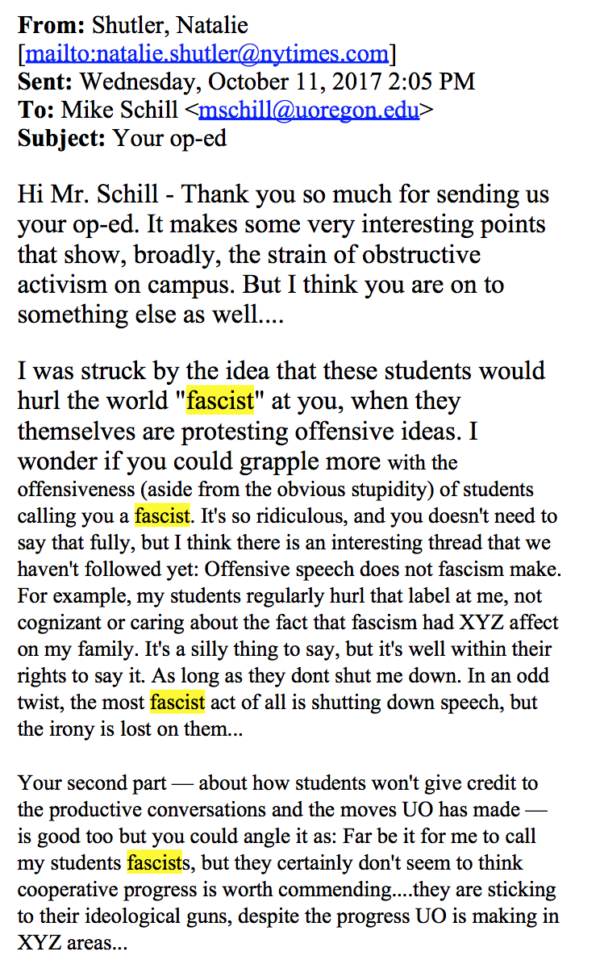 Full disclosure: I’ve never had an editor write crap like that to me, but if one did I’d probably submit a revision along the requested lines too. A pub’s a pub.

Meanwhile, Ms Shutler’s copy editor is either extremely earnest, or has a wicked sense of humor and is on to her fascist obsession. I’m going to go with the latter: