UO Foundation took $535K from the Marion Ross Fund for expenses, then sent his Trustee a nastygram and ignored him

In 1991 UO professor Marion Dean Ross died and gave the bulk of his life savings, $1.2M, to the UO Foundation to manage for the purpose of buying books and photos on the history of architecture, as chosen by the Faculty of the Department of Art History (Now the History of Art and Architecture or HA&A).

As explained in this earlier post, last year Foundation CEO Paul Weinhold asked the Lane County Circuit Court to modify the terms of Ross’s bequest so as to take spending authority away from the faculty and give it to the dean of the College of Design (CoD), and expand the purposes of the fund to general research support for the department – of which the new Dean happens to be a member. I’ve received some additional public records on this, posted below.

First, let me explain how the UO Foundation works. (The amounts have changed a bit over time, but this is the gist). They take 5% off the top of endowment gifts to the University and then another 1% of the principle each year for their administrative expenses (additional amounts are subtracted annually by their investment partners). They allocate 4% per year of the Fund to be spent for the purposes of the gift each year. Their investment returns average about 7% per year, and the excess above the 4%+1% goes back into the gift fund, on the idea that this will keep it and the payouts growing somewhere close to the rate of inflation. The 4% payout is a bit conservative, but common. The UO Foundation’s fees, on the other hand, are arguably steep – some other university foundations just charge 1% per year, and others charge 10% up front, with no annual fees, which works out to far, far less over time.

For the Ross Fund, a back of the envelope calculation would be that the Foundation has earned $535K in fees since they established the fund in 1992: $60K up front, and another $435K from the annual 1% over 25 years, for an endowment which has now grown to about $2.4M. It now yields about $92K a year in spendable money for HA&A, and another $24K for the UO Foundation’s expenses, such as:

(That’s the IRS data for 2014-15 AY salaries, the Foundation will not release more recent numbers, but I’m sure none of their cut was wasted on books.)

Given that money from the Ross Fund and other donors pays the salary of Paul Weinhold, the bills of their lawyers, and the Foundation’s many other costs, you might expect them to be solicitous of the wishes of its donors and their representatives. Or at least not to abuse UO’s previous donors, so as not to discourage future donations.

You be the judge. Here is the letter the Foundation sent Thomas Price, Marion Ross’s only surviving trustee: We’re going to repurpose his money, and if you don’t like it get a lawyer: 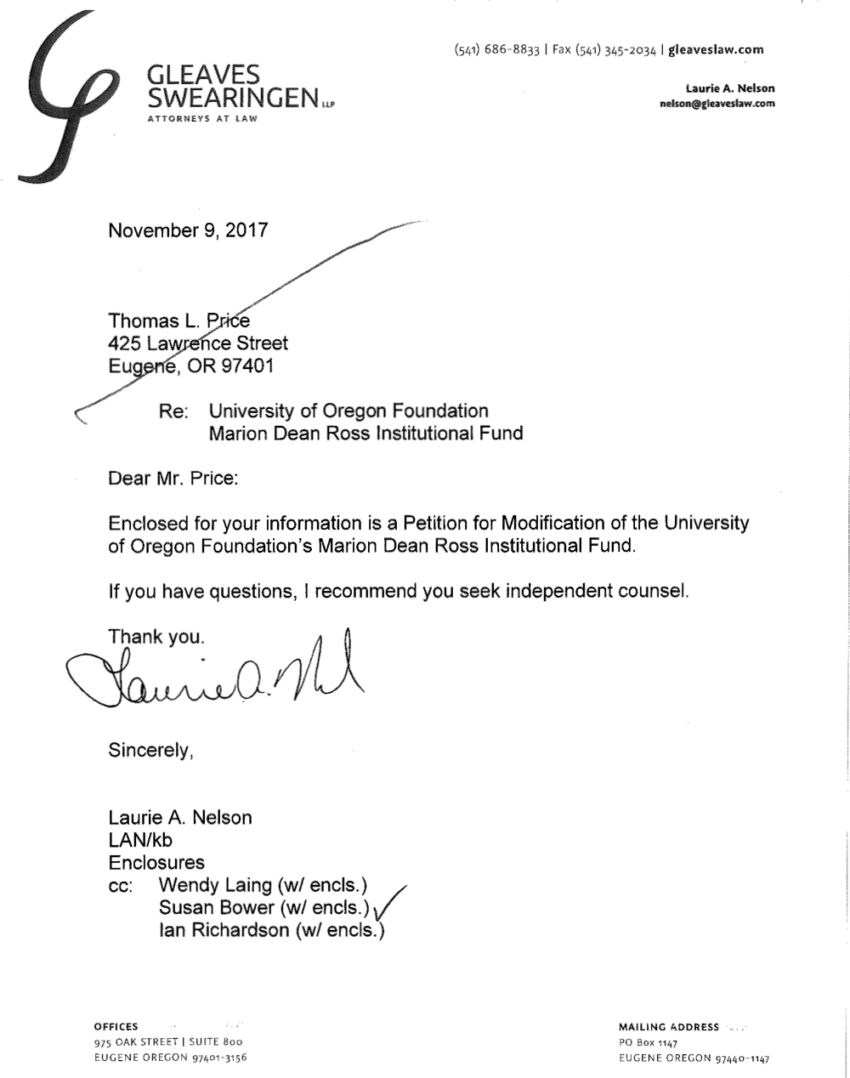 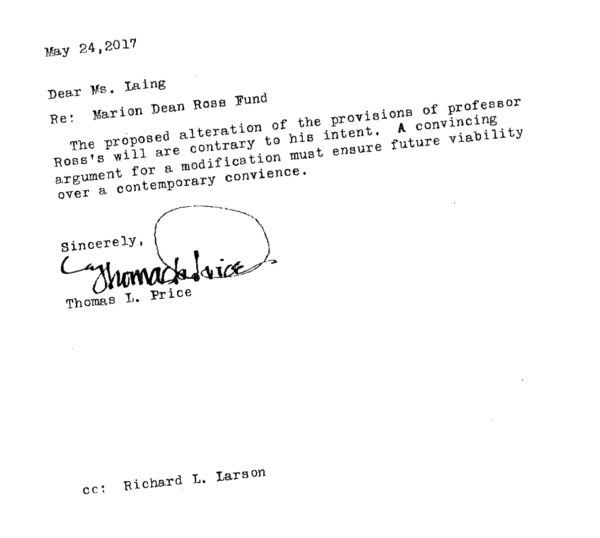 But apparently he wasn’t willing to fight the Foundation’s lawyers – who, ironically, were being paid with Marion Ross’s money. So the Foundation got what it wanted.

Is this what the department wanted? It’s not clear if they were even told the whole truth. Here’s the only thing they voted on, at their Feb 8 2017 meeting:

I don’t see anything in that motion that comes close to approving the decision to ask the Judge to give the CoD Dean authority to spend the funds “at the discretion of the dean” for the department’s purposes. And note that the new dean is HA&A faculty, with a “Slow Lab” that he directs, and which presumably could use some funds – and he now controls some funds.

So, sometime between February and October 2017, the department’s actual vote got ignored, and the UO Foundation went to court asking for this: 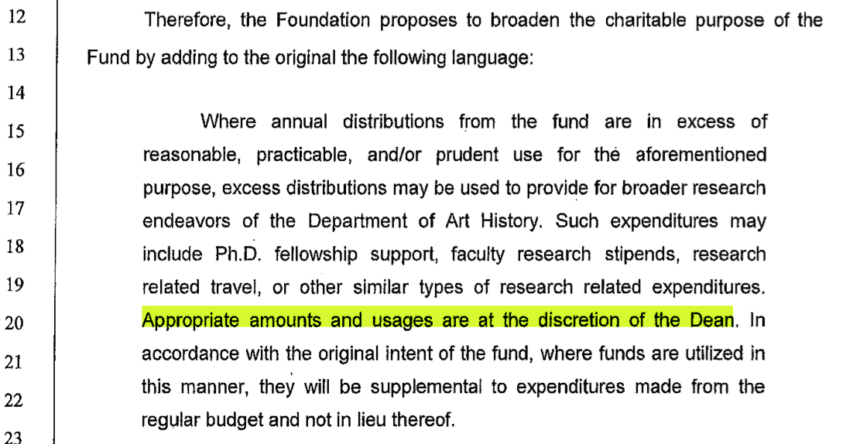 As for the claim that the department was unable to spend the fund for the purposes for which the donor had intended, actually their spending seems seems to have tracked the available payouts quite well, while accumulating a prudent reserve for the purchase of extraordinary materials which might unexpectedly come on the market: 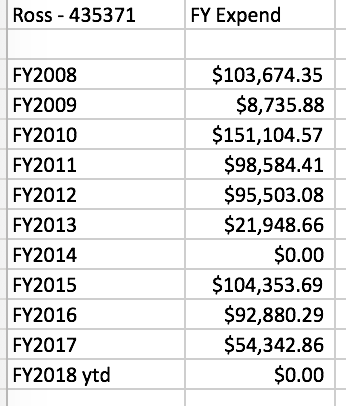 I’ll post additional information about this situation as it comes in.

Here are the public records from which the above info comes from:

Follow the Ross Fund tag below for other documents and info.

6 Responses to UO Foundation took $535K from the Marion Ross Fund for expenses, then sent his Trustee a nastygram and ignored him