NYTimes gives Oregon PERS a superficial once-over, doesn’t cite Sickinger or explain why PERS wants $20B more for its $70B endowment

Reporter Mary Williams Walsh has a poorly-cited rehash of issues originally raised by the excellent coverage of the Oregonian’s Ted Sickinger, who doesn’t even get a shout-out. Walsh:

The first way was similar to what most states do, basing pensions on each worker’s final salary and years of service. But Oregon’s lawmakers included a golden touch, redefining “salary” to include remuneration from any source.

That was how Mr. Bellotti, the former football coach, came to be the state’s third-highest-paid pensioner, at roughly $559,000 a year.

When he retired in 2010 as the university’s athletic director, the standard pension formula was applied to his salary, plus a share of the outside licensing fees and product endorsements the football program brings in. (His pension details, along with those of other retirees in the system, were first obtained in 2011 from PERS by two newspapers, The Oregonian and The Statesman Journal.)

The link goes to the PERS database, not to Sickinger’s 2011 expose:

A new analysis by The Oregonian shows that his pension windfall is not solely the product of his base salary from the university, which was a relatively modest $150,000 in 2005 and 2008 as head coach, and $299,999 as athletic director in 2009. Rather, it was inflated by endorsements by Nike and the Oregon Sports Network, ticket sales incentives and other perks, according to public records released to The Oregonian. Those are sweeteners few public employes get. And it’s a stretch to define some of it as pay from the state. But it falls under the definition of PERS salary for pension calculations under Oregon law.

While Bellotti’s benefits are an outlier, they demonstrate how the mechanics of the PERS system can generate huge benefit flows for a fortunate few. They also show how PERS operated without any absolute cap on covered salary until 1996. And they illustrate how the burden of those benefits will be spread around the state for years.

These payments were included in his PERS calculations even though UO and Nike never made PERS contributions from them.

Walsh’s story then goes on to discuss the burden of PERS payments on Oregon at length, while managing to avoid any discussion of how salary replacement rates for new Tier 1/2 retirees with 30 years of service have already plummeted from 100% to 60% of final salary. From the PERS website: 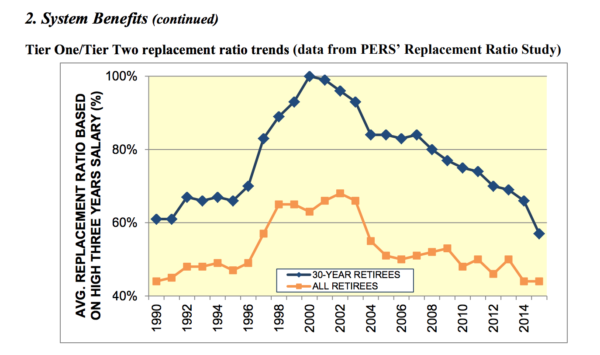 Nor does she discuss the main reason for the increases in the contributions the PERS Board is requiring from state and local governments and school boards: the Board’s insistence on moving as rapidly as possible to add ~$20B to its endowment and make PERS a fully funded pension system, instead of the leaving it as a partly “pay as you go” plan, like social security.

There are economic arguments for fully-funded pensions, and for “pay-as-you-go” plans that use payments from current workers (or their employers) to pay the pensions of retired ones. Most states have made defacto decisions to go with a mix, with much smaller endowment funding than the 100% Oregon is shooting for. The average is 66%. Oregon is already above that.

As the story points out, the money the PERS board is demanding from the state to get to 100% has many negative consequences for Oregon.

So who will benefit from increasing the PERS endowment? The PERS consultants, the Wall Street banks and investment houses that manage the money, and – way off in the future – Oregon taxpayers who will someday be able to use the endowment earnings to pay retirees, leaving more money for public services and/or lower taxes.

Of course those future taxpayers will in all likelihood be richer and more numerous than we are today – so why does PERS think we should suffer for their benefit?

10 Responses to NYTimes gives Oregon PERS a superficial once-over, doesn’t cite Sickinger or explain why PERS wants $20B more for its $70B endowment