Update: A press release, explaining that city officials will be present to discuss the arborcide.

Community members will hold a vigil at 2:00 PM Tuesday to protest the imminent destruction of Hayward Field’s historic East Grandstand. The group, calling itself Save Hayward Magic, objects to the removal of all structures and trees on the Hayward site, and rejects the uncovered stadium proposed as a replacement. Responsibility for upgrading Hayward Field to meet the requirements of the 2021 World Games lies with a private company, Phit, LLC, an instrument of Nike founder Phil Knight.

Those picketing Tuesday say they want the East Grandstand saved because it provides important features not present in the completely replaced stadium first revealed by Phit LLC in April this year. They support the previous model for the site prepared by Nike designer Tinker Hatfield. That design included the East Grandstand in a plan to provide a flexible number of seats for different Hayward events.

The Save Hayward Magic group cites cover from rain, shading from sun, and fan interaction with the athletes as reasons to keep the historic structure. If the wooden structure is torn down over exaggerated fears of dryrot, they say they will continue to advocate for a stadium that includes the fan-friendly features. They say a replica of the 1925 design could be built at an affordable cost using materials already salvaged from the original.

The Save Hayward Magic group was formed by community members who attended meetings called by East Grandstand Supporters. The East Grandstand group has focused its efforts on presenting a legal challenge to the demolition. Save Hayward Magic wants the University of Oregon to pull back its authorization for Phit LLC to construct an enclosed stadium on the site of an existing University facility. They say financing problems with the Matt Knight arena, also managed by the Nike group, demonstrate how the new track venue could be forced to become a multi-purpose facility that draws significantly more traffic to the east campus area. Planning for the new facility bypassed both the City’s Neighborhood Associations and the University’s campus planning department.

Picketers will be at the Powell Plaza, 15th and Agate, starting at 2:00 PM. Later in the afternoon there will be a meeting at that site with Eugene officials to discuss appealing a permit decision that allows the Phit to cut the City-owned trees surrounding Hayward Field.

Save Hayward Magic Coalition will be organizing a vigil at Powell Plaza tomorrow–Tuesday, June 19–at 2pm.  They will be protesting the demolition of the East Grandstand, the process (read: lack of) leading to this point, and the wholly inappropriate involvement of corporate interests in the development of publicly owned University property.  We’re not sure exactly when actual bulldozer demo will start, but there are rumors it could start as early as tomorrow afternoon.

I’d like to believe that the new egofice and accessory schlong won’t cost UO’s academic side, but apparently we’re already on the hook for $1300 large, to rebuild the Hayward utility corridor to make it suitable for the athletic department’s needs: 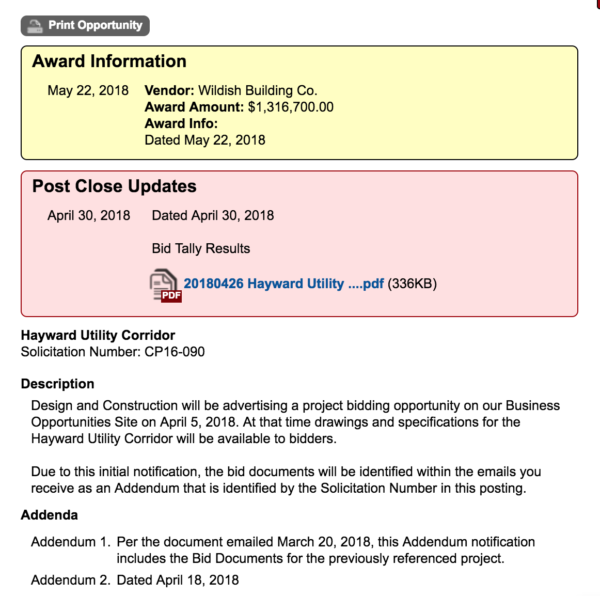 Someone really needs to get the gift letter that spells out how much UO will have to pay for Phil Knight’s gift.

Meanwhile, the Oregon Tourism Commission’s contract with Vin Lananna’s Oregon 21 spinoff, to promote the notoriously corrupt IAAF’s 2021 championships, seems to be getting some special attention from the Oregon DOJ:

The deal was announced in December, but the DOJ still has questions. Presumably the FBI does too.