Just kidding, there’s no sign that Faculty Trustee Laura Lee McIntyre will make any such motion, or raise any questions about why the board continues to rubber-stamp raises for Rob Mullens and his coaches while increasing undergraduate tuition and cutting museums.

BOARD OF TRUSTEES, Th 9:30 AM FORD ALUMNI CENTER

– Call to order, roll call, verification of quorum – Approval of March 2019 summary (Action) [There is no mention of what this summary is in the posted materials.] 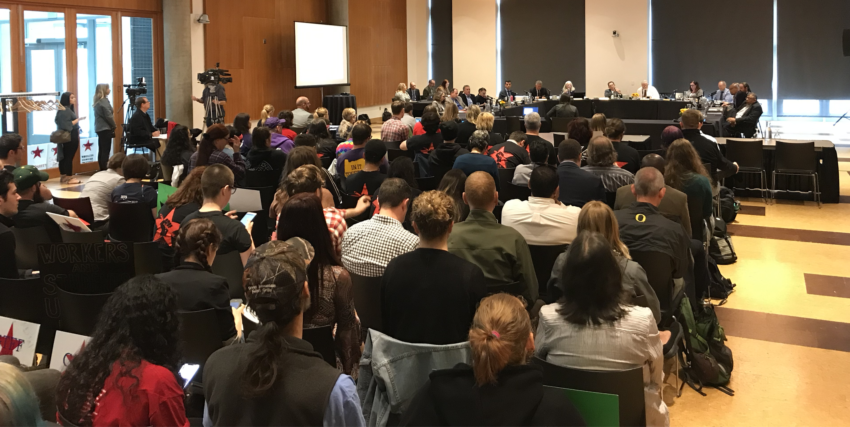 The room is full, the public comments are blunt, calling out the Board for incompetence etc., e.g.:

It seems the only people happy with university leadership on budget issues are donors (and trustees themselves).

The mission of the university, approved by this body, is:

The University of Oregon is a comprehensive public research university committed to exceptional teaching, discovery, and service. We work at a human scale to generate big ideas. As a community of scholars, we help individuals question critically, think logically, reason effectively, communicate clearly, act creatively, and live ethically.

And aside from the vapid “human scale to generate big ideas” phrase, it is a good mission. The mission is the touch stone for decision making. It should be the North Star of the board—the words to revisit when making your decisions.

You are about to be asked to approve an extremely high tuition increase. You are being asked to finance the university on the backs of Oregon students. By doing this you are implicitly agreeing that it is more important to preserve athletics and other donor driven initiatives in exchange for millions in additional debt for Oregon students and families.

The University of Oregon has already telegraphed the message that, instead of plugging the looming budget shortfall. it is more important to install state-of-the-art sound systems in athletics facilities. The new speakers will undoubtedly come from donor money, but this is irrelevant. Legislators have already heard the message that speakers are more important than students. Faculty have heard the message that world-class athletics facilities are more important than students. Students themselves have heard that we’re broke, and that they should take on debt (and years of financial risk) to accommodate the fickle whims of an octogenarian billionaire.

This is but one example, and it is emblematic of a larger problem.

Cultivating donors is like trophy hunting for University Presidents. However, as a skill, it is only valued by other university presidents and those who measure their success in dollar signs. Our president is particularly good at this aspect of his job, and it will undoubtedly lead to a promotion to a better university one day.

On that day, will we be looking at a university with a handful of expensive white elephants littering campus, and serving a handful of elite researchers/coaches, while the core academic facilities rot from neglect, classrooms overflow, and Oregon students are saddled with debt?

The choice is yours, and it’s time for you as trustee to shift the financial decision making back to the mission of the university. You must be brave. You must do this. The University of Oregon is counting on you. 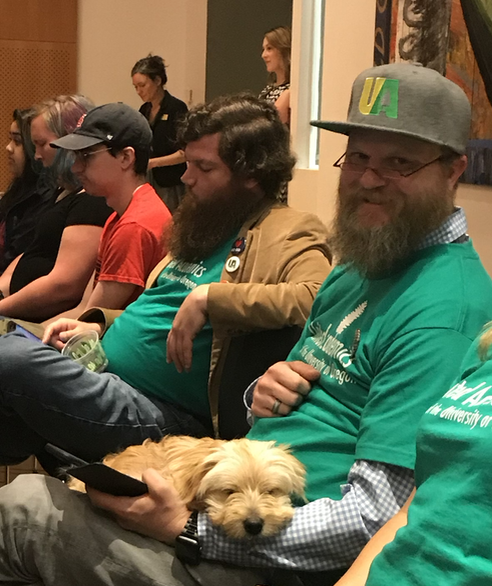 A student: “You ask us to go to Salem and lobby for more state money, but the legislators tell us they don’t trust you to spend the money wisely”

Prof Ellen Scott (Sociology) walks the board through some of the work that LERC and UO faculty and grad students have done and how it has led to changes in Oregon laws that have improved the lives of working Oregonians.

Prof Maram Epstein (East Asian Languages) asks the board to exercise their independent fiduciary responsibility to redo the proposed budget in a way that is consistent with UO’s mission as a public university.

Many, many students make comments as well.

Former staff Trustee Kurt Willcox: The university is turning away from its outreach mission to the state by defunding LERC and the museums.

“Hayward Field does nothing for me. I’m a student.”

written comments in board materials

these seem to be postponed

VP Marbury is upset because the ASUO President criticized him.

President Schill blames outgoing Provost Banavar for the budget cuts to LERC and the museums. This is chickenshit bizarre.

12:47, and none of the trustees have yet mentioned any of the issues that came up in the public comments, such as cuts to athletic subsidies.

Ginevra Ralph asks why students don’t understand about gift restrictions. VP Moffitt explains that they do, they just think the university should shift its fundraising priorities. (Or just tax athletic donations. The UO Foundation already taxes donations, but won’t explain where the money goes.)

Vote: All in favor except Paustian.