Paul Weinhold and Kate Brown Brown want $40M in tax money for this?

And to think this only cost the Duck boosters $400K, or 1 cent in their money to get a  dollar from the public:

Angela Wilhelms, secretary to the UO board, said on behalf of the four trustees: “There is absolutely no correlation between personal political contributions by trustees and any decisions by Gov. Kitzhaber.

“Any insinuation of quid pro quo or any other connection is just flat wrong,” the statement said.

The Manchester Guardian has the latest report:

When Adam Gemili walked towards his blocks in lane seven for his heat of the men’s 200m at the IAAF world championships in Doha on Sunday night, he looked up and waved to friends and family in the grandstand. They would not have been hard to spot among a crowd estimated at around 1,000 scattered around a stadium built for 40,000.

… Nike, the running shoe company who gave Sebastian Coe the contract that he was so loth to forfeit when he became president of the IAAF four years ago in succession to the man he once described as the sport’s “spiritual leader”, the disgraced Lamine Diack. Nike, the company whose negotiations with Felix over a new contract when she became pregnant started a battle over fair payment for sportswomen during the maternity period. The award of the championships to Eugene was made without transparency in any respect …

The IAAF seems to have taken down their video of the 2019 bidding process, but I’ve got a back-up. Here’s former Secretary of State, now Governor Kate Brown, promising the $40M: 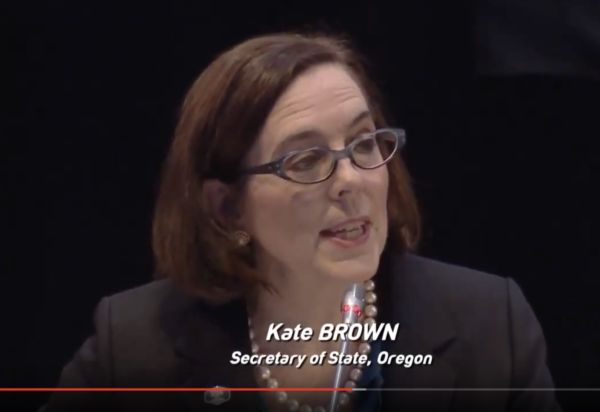 One Response to Paul Weinhold and Kate Brown Brown want $40M in tax money for this?