Update: OSU hired F. King Alexander, despite censure by LSU Senate and the AAUP after he fired a professor for cussing in class 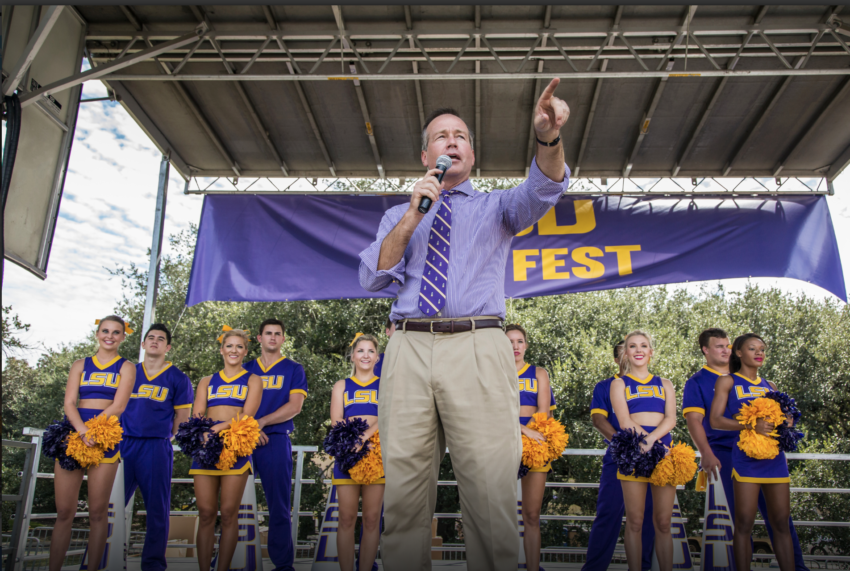 I wonder how much of this the Witt/Kieffer search consultants, Zachary A. Smith, Ph.D., Suzanne Teer and Kim Brettschneider passed on to the OSU Board and hiring committees. In 2018 the UNC system banned its schools from hiring Witt Kieffer for searches, after they failed to do due diligence on a chancellor hire.

If you are interested in having an informed opinion on his role in firing LSU professor Teresa Buchanan, I doubt you’ll do better than this thorough, well researched, and nuanced 2017 report in Elle – a magazine which apparently sucks in readers with promises of fashion and horoscopes, and then gives them some serious reporting about higher education. Warning – it’s a long story: 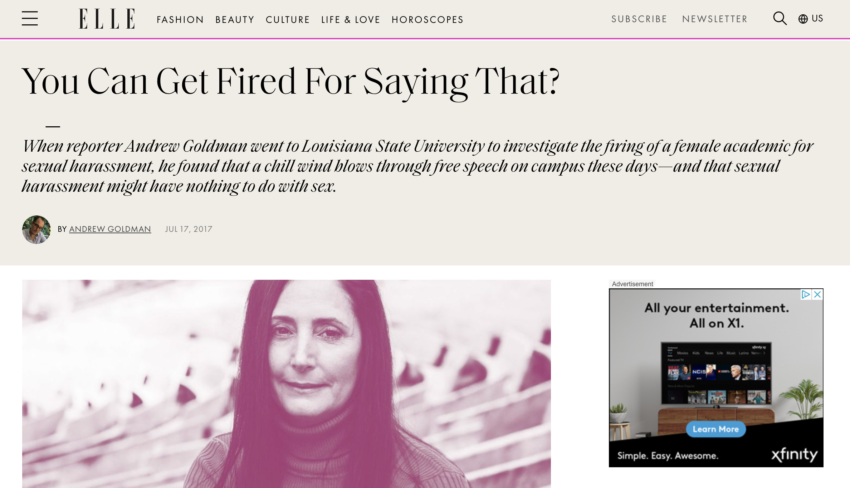 Or just cut to the conclusion – $600K a year LSU President Alexander fired a $78K professor without even bothering to do his homework:

[President] Alexander now probably wishes he’d paid closer attention to the Buchanan case. When he was deposed by Corn-Revere this January, he admitted that he hadn’t read the hearing transcript, had no idea who’d testified, and chose to overrule the faculty panel largely based on the complaints of the local superintendent, Ed Cancienne. Alexander said in the deposition that he was particularly moved by Cancienne’s assertion that Buchanan had said “pussy” three times in one of his schools, though he and the other LSU investigators admitted that they were under the impression that she’d used the word in the anatomical sense. In fact, according to testimony, Buchanan had asked teachers how they’d respond if a parent of one of their students got hostile and called them a “pussy.”

Here are some other sources on LSU President Alexander and the Buchanan firing:

The professor’s firing offense? From the Baton Rouge Advocate, here:

Buchanan’s controversial comments included saying “f*** no” repeatedly in the presence of students, using a slang term for vagina that implies cowardice, and joking that the quality of sex declines the longer a relationship lasts.

Buchanan, who worked for LSU for nearly two decades, claimed the salty language was part of her teaching approach and was not directed at — nor did it disparage — any student.

The LSU student newspaper has the story here on the subsequent censures of LSU Pres F. King Alexander by the Faculty Senate, and of LSU by the AAUP:

Alexander fired Buchanan in 2015, despite a panel of faculty members choosing not to recommend her dismissal when they found her guilty of violating the University’s sexual harassment policies.

Buchanan officially filed a notice to appeal the court’s decision on Feb. 1.

However, the Faculty Senate is not satisfied with the University’s decision and suggests that Buchanan’s right to due process was violated.

Despite the court’s initial motion for summary judgement, the LSU Faculty Senate and the American Association of University Professors have not reconsidered their respective censures of Alexander and the University. … [Full story includes links to court decisions etc.]

The Foundation for Individual Rights in Education, which joined in the unsuccessful lawsuit against Alexander and LSU on behalf of the professor he fired, has more here:

What happened to Teresa Buchanan was wrong. The LSU administrators involved, including the university’s president, F. King Alexander, should be ashamed of themselves. And the courts should not have let LSU get away with Buchanan’s firing. If anything, the Supreme Court’s choice to pass on this case will only increase the likelihood that it will see more such cases in the future.

“Dr. King Alexander is the right person, educator and higher education leader to carry on the transformative impact that Oregon State University provides throughout our state, nation and world,” said Rani Borkar, chair of OSU’s Board of Trustees. “His leadership will carry forward the university’s significant momentum generated by President Ed Ray.

A more skeptical view, from the former LSU Board chairperson who tried to get Alexander fired, here:

Governor says he’s not ready to support such an action.

Gov. John Bel Edwards said he’s not ready to back up a call to oust LSU President F. King Alexander by the former chair of the state’s top policymakers for public higher education.

Richard Lipsey, a longtime supporter of LSU and one of the richest businessmen in Baton Rouge, pointed to a series of what he called scandals that has hit the headlines over the past few weeks from the suspension of basketball coach Will Wade to the university’s involvement in hospital foundation fraud allegations to criticism from the Legislative Auditor for improperly paying a vet school professor who had been disciplined.

… “It’s very unfortunate what’s going on there. It’s time we move on,” Lipsey said in an interview about a series of issues that have arisen over the past few months at LSU that he blames on Alexander’s leadership. “We don’t really have all the facts, they’re not very transparent. But there have been so many missteps over at LSU. We need to begin the search for a qualified leader.”

… Lipsey faulted Alexander for spending $85 million on a “lazy river” swimming pool while the basement of the main library gets ankle deep in water whenever it rains.

Lipsey faults Alexander on being unable to get handle on the fraternities at LSU, where one freshman died from overdrinking in 2017 and nine DKE members were arrested earlier this year for violent hazing incidents.

… On Monday, the legislative auditor issued a report finding that the LSU School of Veterinary Medicine “improperly compensated” a faculty member more than $400,000 in salary and benefits for more than three years even though the professor did no work.

… An independent auditor claimed last week that fundraiser John Paul Funes had diverted at least some the $810,000 they say he took to help the parent of an LSU athlete by paying her wages for a job.

Alexander’s new contract is here, thanks to an OSU reader for the link. They’ll pay him $630K, plus perks. His “return to faculty” rights are pretty sweet, though nothing compared to what UO’s generous Trustees just promised Pres Schill – from other people’s money. 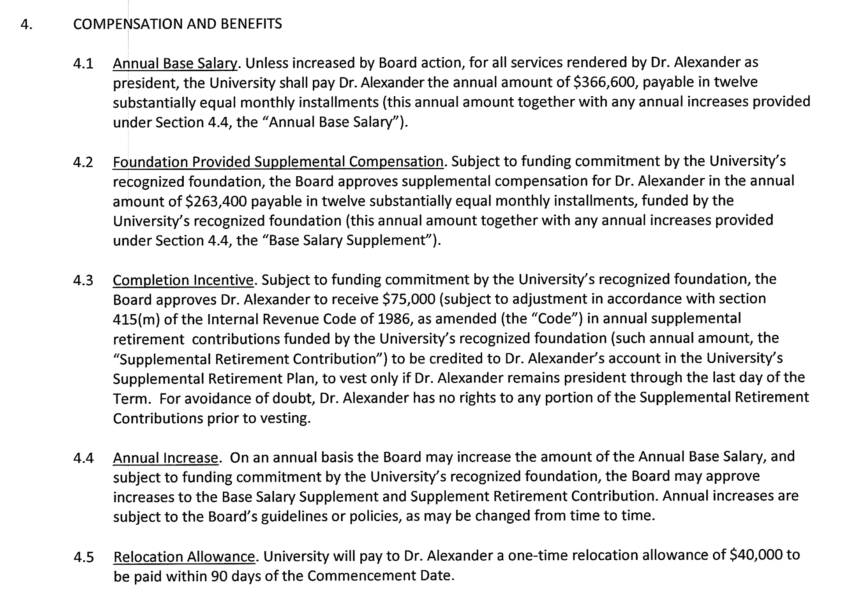 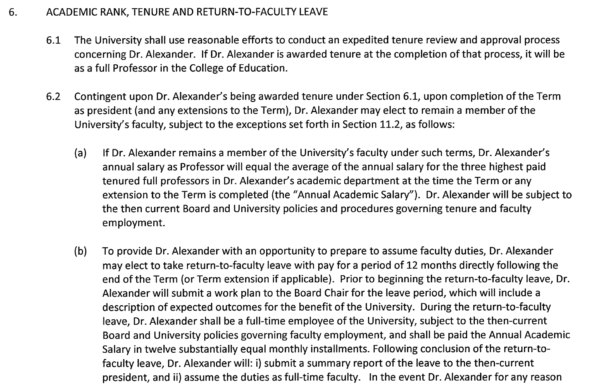 Schill’s deal is for ~3x the average UO law professor’s pay, and 1/2 the work: 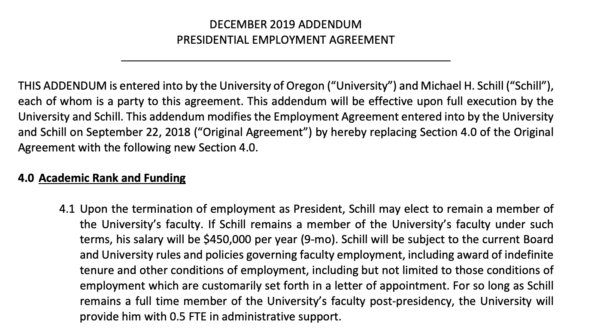 10 Responses to Update: OSU hired F. King Alexander, despite censure by LSU Senate and the AAUP after he fired a professor for cussing in class