Faculty Union to continue bargaining with Admins, Tu and Th

Matella: Shares marked up version of Union’s powerpoint on general principals from last week. Admin response is in red: 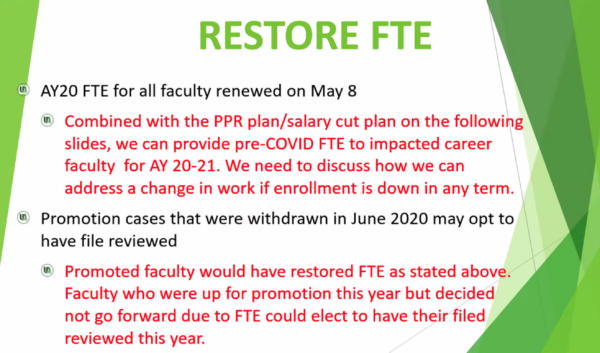 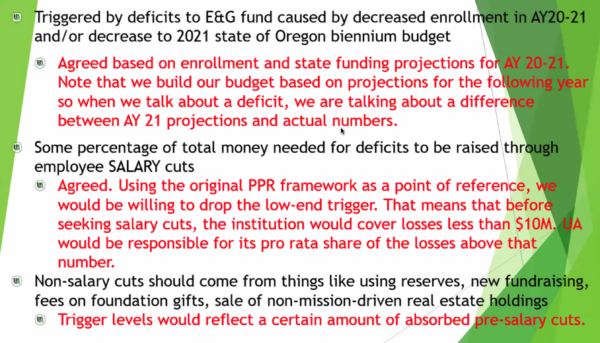 Cecil: So you want to use any failure to meet the pre-covid predictions from Roger Thompson of *increases* in enrollment as the trigger for pay cuts? Matella: Yes. [Also, Admin wants to use enrollment rather than tuition as part of the trigger?] 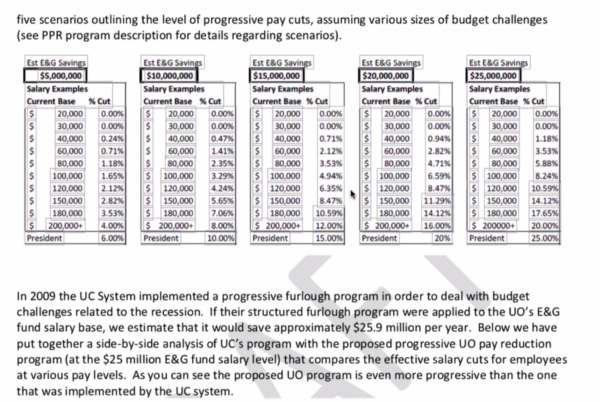 Cecil: So the union’s share would be based on the faculty’s current share of the UO budget? Matella: After a $10M hold harmless for the union. [Some back on forth – this is a framework not a real proposal yet.] Urbancic: Auxiliaries? Grants? [Unclear]

Matella: [I think she’s saying faculty are held harmless for a $10M loss. Losses above that the faculty give up a share proportionate to their current share of E&G budget. So, say $25M loss out of E&G, admin pays first $10M, the union pays their share of the remaining $15M, or ~5M.

Sinclair: UO’s enrollment projections are often aspirational, rather than fact based. Union will need to see the basis for the projections.

Matella: We’re just spit-balling here, conversation on principles. The powerpoint is just a starting point. Cecil: That helps, thanks. 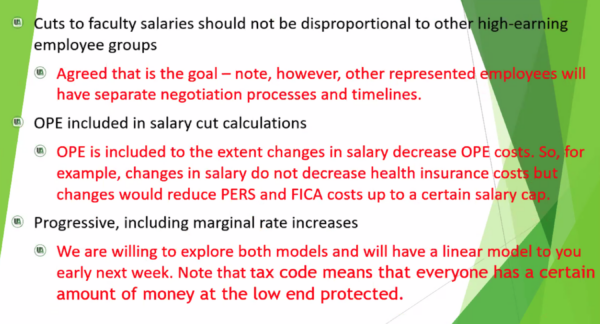 Questions about OPE calculations and savings. Not a linear function of salary. UO uses a “Blended OPE rate” but is willing to use actual savings if union wants.

Cecil: So, if we do this we’ll also be able to use actual OPE for course buy-outs etc?

Matella: We hop to share our models next week. [She said the same thing last week.] 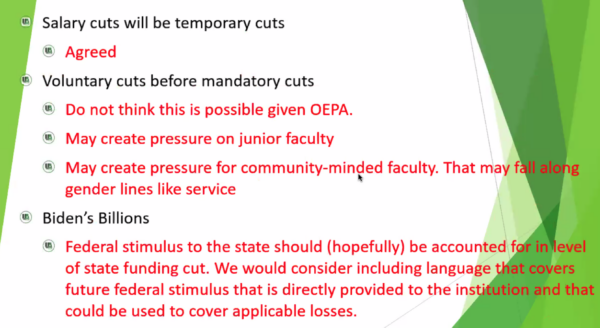 Cecil: Last time Admins asked faculty and OA’s to take cuts at the same time Senior Admins took raises. Then they got more raises later. Are they gonna pull that shit again? Board gives Schill more bonuses? An even sweeter retirement scam?

Cecil: OK. We want to continue looking at voluntary plans. OEPA is not really a problem.

Cecil: UO already got $8M from CARES. Such payments will mitigate pay-cuts, right? Matella: Fed money comes with lots of restrictions. Not promising it will be used as an offset. Maybe. Cecil: How interesting.

Cecil: Simplest would be to wait til next June, do the math, make any cuts to offfset losses.

Matella: What principles do we still need to work on?

Cecil: How much money would it cost to restore career faculty FTE? Matella: $6-8M, I think. Cecil: How much has the hiring freeze saved? Suspension of travel? Wage freeze we’ve already agreed to? Matella: We also have losses, cost increases. Also losses in auxiliaries like housing, sports. We need to cover those.

Cecil: I’m assuming that any savings from union salaries won’t go to athletics, right? Matella: It’s complicated. Can you give me questions by email?

Cecil: Ducks have a $120M budget, plus the $5M they already skim off the academic budget. You sure we’re not going to end up subsidizing them more when they can’t play football?

Back and forth about funding-contingent faculty and cuts. 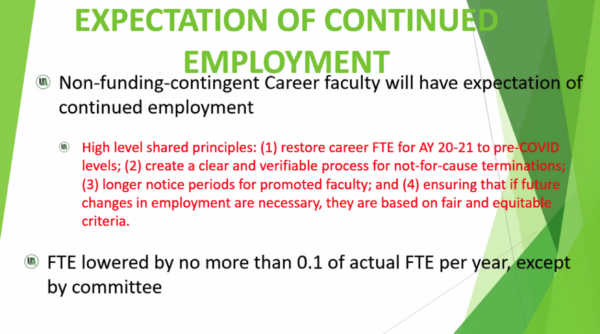 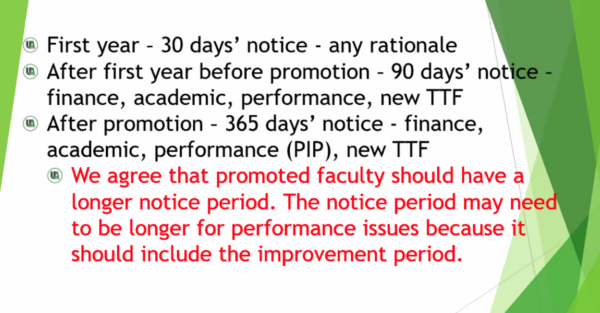 Matella: Given the global pandemic, not sure we can afford to give a full year’s notice. Also other universities give less. Urbancic: Under the current 3-year contracts, on average career faculty have to be given 18-months of notice. So we’re giving you *more* flexibility by cutting that to 12. Also, if we cut a program these are one-time costs, not recurring, and not that expensive.

Matella: Thanks, that’s a helpful point. I will take that back to my team.

Green: Regarding the comparison to other universities, we shouldn’t be comparing ourselves to non-unionized places, or places with lots of other academic employers. 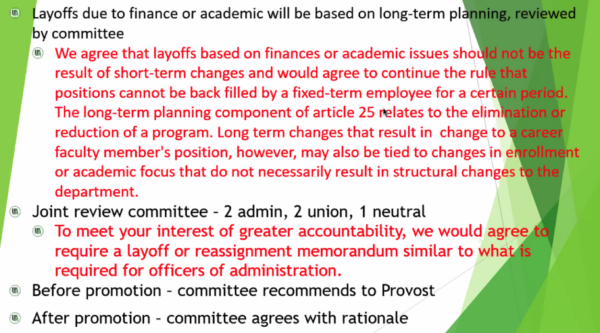 Just kidding, Pres Schill has fall-back tenure rights in the Law School and a sweet teaching deal. We’re going to paying $8M a year to subsidize law for a long time.

Matella: Agree with the need for more accountability, concerned that this committee would actually make decisions.

Bramhall: What if legit shared governance process with the Senate leads to layoffs? Cecil: This committee would be a flea compared to the Senate.

Long back and forth about management flexibility and their prerogative to push enrollment risk and the cost of admin bloat off on the least well-paid faculty.

Time for a lunch Break? They’re back:

Matella: Proposed PPR could run for up to 2 years. All employees are in. Cecil: We have lots of questions about triggers, duration, enrollment vs tuition, etc. Your plan is to keep running it until you make up the money you’ve lost? Matella: We realize this is too complicate. Could we simplify it, like OSU? Cecil: OSU said they’d pick up first $35M, and anything over $65M. Matella: We can’t do that. Cecil: I’m concerned about basing this on projections. Obvious incentive for Thompson to over-estimate. Matella: I can get you information, but need to know where you’re going.

Cecil: Baseline for enrollment should be something like 5 year average, not an arbitrary target. Matella: It’s true Brad showed the Trustees some crazy-ass projections in the past, but those weren’t serious. That’s why they stopped inviting him to speak and invited that economist instead. We’re better at this now.  Cecil: If enrollment was up last year, why did you cut faculty? Matella: …

Cecil: You have a commitment from the union to take the cuts necessary to restore career FTE, conditional on you showing there’s no other way to find the money. So why don’t you restore that FTE now? Matella: I hear you. I’m trying to make a deal. I just can’t commit to anything. Especially not cutting the law school. Cecil: We’re not talking about cutting the law school. That’s UO Matters, and even he doesn’t want to cut it, he just wants you to not pay for it with undergrad tuition.

Cecil: Again, can you tell us how much you’ve saved and plan to save with the other cuts you’ve made? Matella: Not a mandatory subject for bargaining. We’re having those conversations with the Not-Senate sham committee. We want to explore these subjects with you. What’s the best next step? Should I put together another PPR plan? Cecil: If you don’t want to be transparent about where you’re spending and saving money, you can’t expect us to go along with big cuts. Small ones, maybe. Say 2-5M.

Matella: Why don’t I come back with some stuff on caps and thresholds? Then see if you want more info?

[Sorry, missed some stuff. Apparently there was a caucus.]

Pratt: Here are some basic union principles for cuts:

3; Should be based on tuition and state appropriations, not enrollment numbers.

4: Need something more than a JH announcement that “here’s the deficit, pay cuts are now triggered”. Need real transparency.

Matella: Thanks. I’ll get you some more bullet points in response. Also some response on TRP. 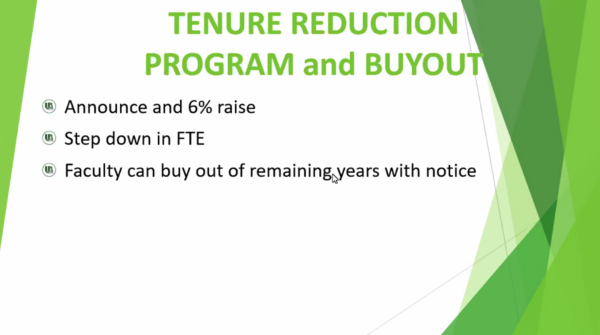 The United Academics bargaining team met with the administration bargaining team for four hours on Friday, June 26, to begin our summer bargaining sessions. In these sessions we are attempting to find agreement on restoring FTE for Career faculty who had their FTE cut in May, a fair salary cut plan to address anticipated deficits, fixing the broken Career contract system, and a better retirement/buyout plan for our tenured faculty.

This first session was designed to have the parties discuss principles as we attempt to solve our mutual problems. Our team presented some basic bullet points and we discussed how they might be implemented. We tried to emphasize two points: One, that the parties should work together to find ways to save or raise money before turning to employees for wage cuts, and two, that the administration must stop thinking of Career faculty FTE or jobs as their “flexibility” to address short-term budget problems.

We return to the virtual bargaining table on Tuesday, where we are scheduled to hear the administration’s thoughtful response to our points and their team’s guiding principles.

You can register in advance for these webinars:

We hope you’ll take some time this week to watch.

7 Responses to Faculty Union to continue bargaining with Admins, Tu and Th