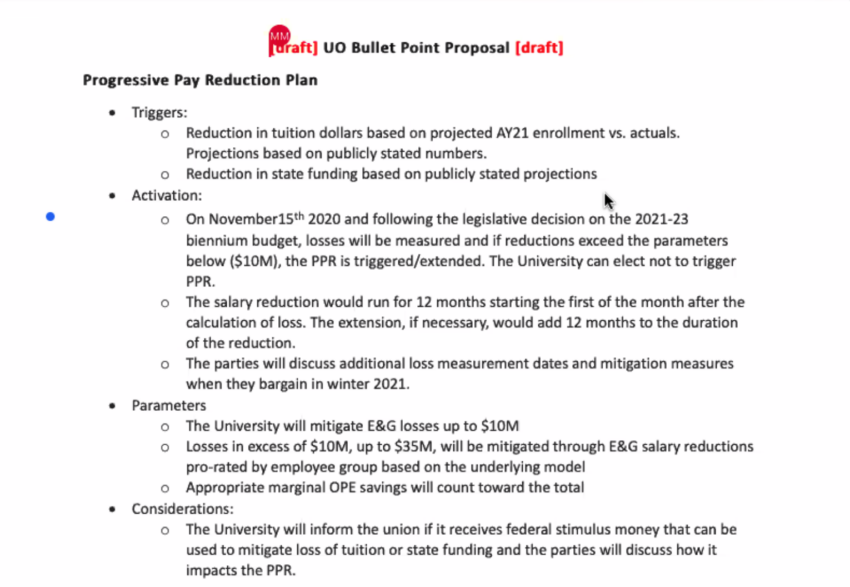 Matella: Brad is working on budget projections now. He knows algebra! I’ll get you them soon.

Here’s what the faculty would get for accepting cuts: 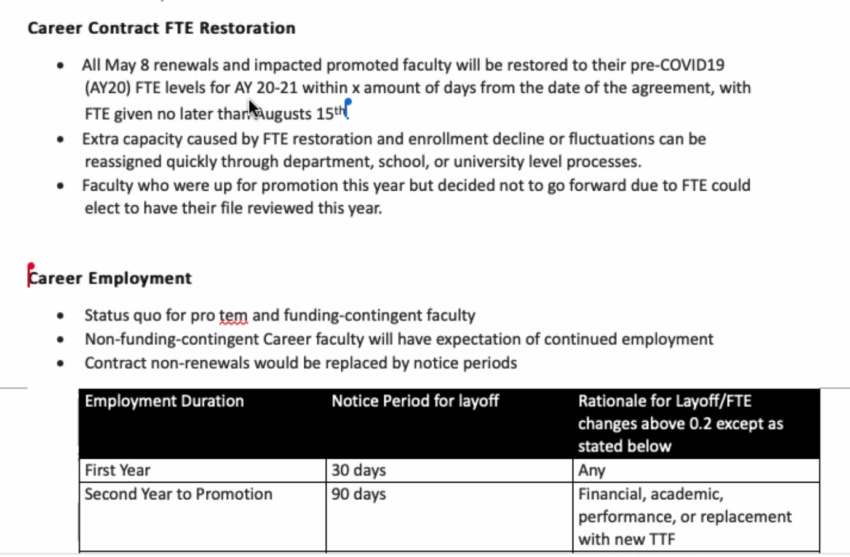 Cecil: Need to pin down what you mean by pre-COVID levels. You mean the 0.1 contracts that were being give out then, e.g. to AEI? Also, people get lied to.

Matella: OK will take back to my team. I agree that heads and deans tell faculty things that are not true. This is why we need central control. 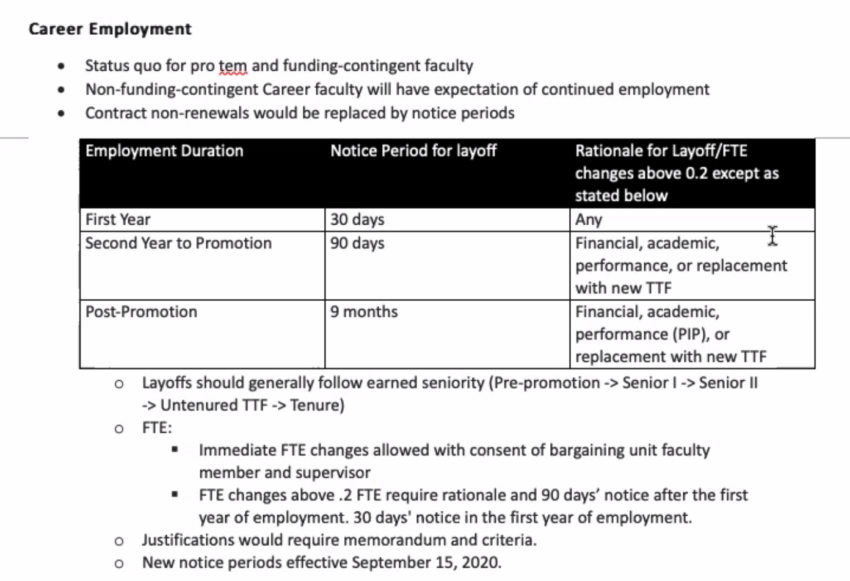 Matella: We want to keep flexibility to change FTE on the fly.

Cecil: We don’t want you to keep flexibility to change FTE on the fly. Reading this, you could have used the above to give *all* NTTF 0.1 contracts – and waited until September to do it.

Matella: But we’d have to write a memo justifying that.

Matella: I don’t understand why you want to make it harder to reduce FTE than to lay people off.

Cecil: Nothing in your proposal keeps you from shifting all the risk from enrollment/funding problems to the NTTF/Career, as you did this spring. So, department could give you a three year contract at 1.0 FTE, then 90 days later reduce it to 0.1 FTE, after writing a memo.

Matella: OK, please come back to me with a counter.

Matella: What would UAUO’s position be on the one-time buy out figure? 33%? Cecil: Enough to get some faculty to retire. You think 33% is going to excite people?

[Lots going on here. Admin wants to end the TRP permanently. Replace it with 2 temporary early retirement/buyout plans – offered for a limited time only. The idea is to get a spike in retirements/tenure relinquishment now. Matella believes that the current TRP does not incentivize early retirement – it’s just a bonus for people who are planning on retiring anyway.]

Matella: Current TRP is very expensive – just look at what Brad’s getting.

Cecil: We have a shared interest in encouraging COVID retirements. But not in ending TRP.

Matella: How about an ongoing incentive program, tied to employee’s place in their career? (Not sure it’s legal to do this by age, but perhaps by years in rank or something.

Cecil: Will you share model you used to cost out our previous incentive program. Matella: Yes.

Cecil: Are you also looking at early retirement for non-faculty? Matella: Yes, but not sure it’s workable or a cost saver.

Moving back to layoffs:

Cecil: Are you willing to consider some mechanism for financial criteria that does not involve some administrator saying we’re in financial crisis?

Cecil: How do we distinguish between a real crisis and a decision to spend university E&G money on, say, wiring up the Phildo?

[Sorry, live-blogging suspended for an hour or so, had to run to Jerry’s. Back now, they’re caucusing]

Matella: For the “panel”, we’re ok with two admins, two faculty, one neutral. Triggered by a complaint by a faculty member about contract rights – not academic judgement. Panel would review w/in 15 days. What were you thinking re the provost’s role?

Cecil: The panel would have to agree before a senior instructor could be laid off for financial reasons.

Matella: Gotta take that part back to the provost.

Cecil: Back to the wage cut. We will need information on the hold harmless level. We don’t want to agree to wage cuts, then discover you’ve blown $1.5M on wiring up the Phildo, or faculty tracking software.