You can register to watch  here, and will then receive a Zoom link via email. Liveblog, usual disclaimer: my thoughts on what people are saying, trying to say, trying to be thinking, etc. Nothing is a quote unless in ” ” ‘s.

Matella starts with the pay cut proposal. The administration’s proposed changes are in red: 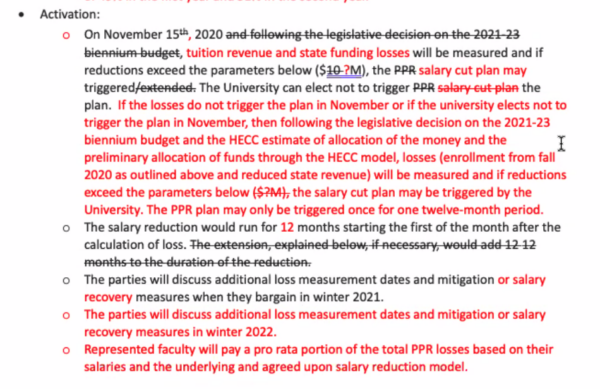 So no agreement yet on how big a revenue cut is needed before the cuts could be triggered. 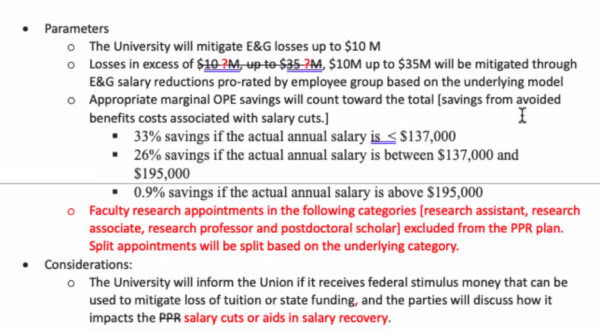 The administration wants to only be required to mitigate the first $10M of revenue reductions before going after faculty salaries. One obvious question is how much they’ve already saved through the hiring freeze, salary freeze, CARES funding, job-share, early retirements, etc. Probably well over $10M. So would they need to make additional cuts, to say the bloated GC budget, before going after faculty pay?

After $35M is saved from pay & benefit reductions (over all employees paid from E&G fund) no additional pay cuts. Since (very roughly) about $500M of E&G is for pay and benefits, this would cap pay cuts at an average of about 5%. Is this right?

Long discussion of Foundation money ensues. Foundation boss Paul Weinhold has already expressed his willingness to use the Foundation’s $1B endowment to guarantee track and field championships – but would he do it for mere academic matters?

Above gives flexibility in assigning replacement work to the career faculty whose jobs would be saved.

Discussion moves on to layoffs: 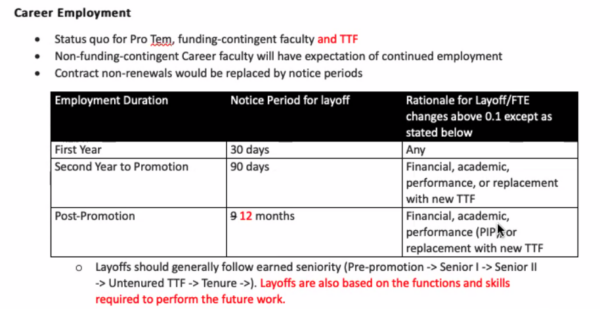 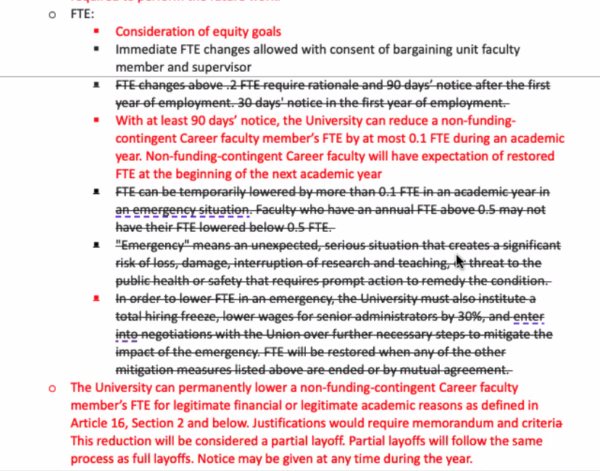 Matella pitches this “functions and skills” language as a way to protect diversity hires without getting in trouble with SCOTUS rulings. I’m not sure if this is genuine or an attempt to give more administrative flexibility about using layoffs to get rid of particular faculty. Cecil goes after Matella on this vague language.

This new admin language at the bottom in red would appear to give the administration the ability to lower career instructors FTE *despite* the pay cut proposal. Strange, I thought the whole deal was pay cuts in exchange for job security.

Matella now says that the admin doesn’t want pay cuts over 20% for high paid faculty and admins because it’s too disruptive to their lives. Cecil points out that the admin wants the ability to make larger than 20% reductions to career instructor FTE – that’s not disruptive?

Complaint process. Speaking of complaints Matella is scrolling through this really slowly. Can’t she just share the doc? Speaking of sharing where are all of Brad’s “models” that the admin was going to share? 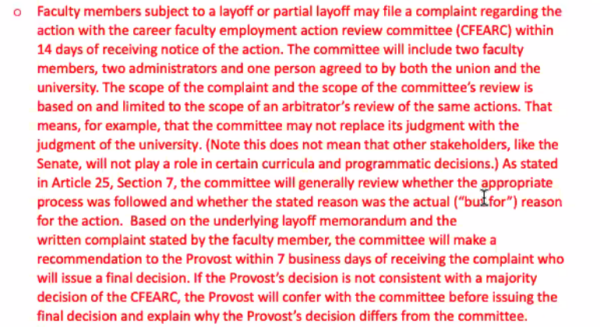 In the end everything is still up to the provost – i.e. Angela Wilhelms. Rules below provide no real protection, and Cecil gets Matella to admit:

Bottom line, the UO administration has blown through reserves on things like the law school, athletic subsidies, athlete villages, admin bloat. The pandemic made those mistakes clear and serious. Now they want the faculty, OAs, and staff to bail them out, without giving up their power to make similar mistakes in the future, and without promising any job security.

Cecil: So you want the union to agree to replace a neutral arbitrator with the provost? Matella: I think this will be better for the faculty. Honestly. That’s what they pay me to say. Cecil: Unlikely we’ll accept. Matella: I expect to be bargaining for a long time.

Matella: Brad’s got his own retirement worked out pretty nicely, but still hasn’t done his homework on the TRP and buyouts for others, so we just have some general shit to throw out:

Cecil’s recap before lunch break: Seems like we started in April with the idea of using wage cuts to get job security. But this morning we heard from you that you want to retain the ability to cut career instructors.

Matella: We have always wanted to use temporary wage cuts to respond to immediate crises, instead of layoffs. But yes – we want to be able to respond to long term changes with layoffs for career instructors. We’re looking at 4-5 years of temporary enrollment decreases.

Cecil: Let me walk you through your optimal strategy regarding layoffs, were we to accept this proposal. … So, how about we agree to no FTE cuts unless we have actual enrollment decreases? In other words – make you cut somewhere besides career faculty?

Matella: No. Can we break for lunch?

Whalen: UO has great faculty at all ranks, TTF and Career. We’ve made many sacrifices for UO and our students during the pandemic. We are really worried about all the faculty, and at the moment in particular worried about the 225 career faculty facing 0.5 FTE cuts.

Boscha: For those of us investing our lives and careers at UO, what is the administration going to do to protect us, rather than treat us as budget flexibility?

Urbancic: Read the UO mission statement. Career faculty are integral to fulfilling it. University needs to respect that. We’re willing to talk about shared sacrifices – but you don’t want to share, you want to put all the risk on the career faculty.

Matella: I’m confused. With the pay cut plan we were trying to move in your direction, limiting the window. This would mean less sacrifice. I thought I was moving toward an agreement.

Cecil: What we thought we heard this morning from you was smaller wage cuts for one year, but with the possibility of permanent decreases to career FTE.

Woodruff-Borden:  We already have the power to cut FTE. We’re in no way additionally devaluing career faculty work with this new proposal. We’re simply struggling to find strategies to navigate through this.

Cecil: You said this morning you only wanted pay cuts to last 1 year because then “good faculty” will leave. You’ve taken fundraising off the table. You don’t want to talk about other ways to save money. So how is this shared? You’re putting it all on the career faculty.

Long discussion about committee on legitimate reasons, including a neutral third party, to replace arbitration.

Lots more back and forth. Sorry I’m not doing a good job blogging it.

They’re back. Cecil proposes meeting again Thursday at 9AM to go over newly discovered middle ground. Matella agrees. See you then.