It’s still a pay cut (assuming the revenue shortfall is large enough to trigger it) and it does nothing to constrain JH from pissing away money on the Phildo, Law School, etc. The cuts will apply to faculty and OAs – I’m not sure if that will include Knight Campus faculty & administrators. In exchange the administration agrees to take its pistol away from the heads of the 211 NTTFs up for renewal this year and give them full 1.0 FTE contracts. Here’s the UAUO explanation:

Please submit your question(s) here. We will also take questions during the meeting, but advance notice allows for us to make sure your questions are addressed. If you are unable to attend live, a recording of the meeting will be available on our website.

We have a deal!

After four weeks of tough bargaining, we struck a tentative deal with the administration over the restoration of FTE, a progressive salary cut package, and the outlines of how we will revise the system for employing Career faculty. The bargaining team believes this is a good deal and a vast improvement on the salary cut plan offered in April.

Before we get to the details, the bargaining team would like to give a hearty thank you to all the members who tuned in to watch. Over 200 unique viewers joined some part of the sessions. Bargaining via Zoom is new to all of us, and it felt very different not to have the live feedback of supporters in the room, but we were constantly cheered knowing that people were with us (if at a safe distance).

We were not able to reach any agreement on a new Tenure Reduction Plan (TRP) or a buyout program for those wishing to retire. We agreed to meet to try to find agreement in the coming months, because both parties agree that the system needs revising, but both parties felt there was too much uncertainty about what faculty would want and what the administration can afford to change right now. We also will discuss whether we can find a way to help those faculty who are currently in their three years before going on reduced TRP hours to avoid taking a permanent cut to their retirement benefits.

We are still dotting the i’s and crossing the t’s on this tentative agreement; when that is done, we will send out information on a ratification vote along with the finalized text of a Memorandum of Understanding. We will be voting on the FTE restoration and salary cut portions of the Agreement. We still have about a month of work to do on the system for Career contracts before it is ready for the membership to vote on it; expect to see the details of that plan in October.

A Summary of our Agreement with the Administration.

Withdrawn promotions: Career faculty who had their promotion submitted to the Provost but withdrew their file can opt to have their file reviewed by the Provost as if it had not been withdrawn. The review should be complete before the start of the academic year.

Lowered the rates for the lowest earners: The chart below calculates the effective salary cut for employees at selected base salary levels with a comparison to the comparable rates in the April PPR plan. Cuts do not impact stipends, awards, or overloads. 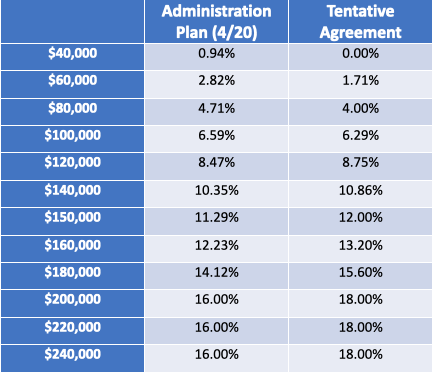 Percentage cut for salaries of the Tentative Agreement vs. the Administration’s April PPR.
Our plan is for one year; theirs was for up to four.

Although we were not able to bargain for a higher tier, we were able to raise the amount of the cut on those earning more than $200,000 from an April 16% rate to 18% rate. The money from this increase was used to raise the floor of the cuts from $30K in the administration’s April proposal to $45K in the Agreement.

Delayed implementation: There are two possible times that the salary cut plan could be triggered. If the university experiences a tuition deficit and/or a cut in state funding in November greater than $15 million, the administration could trigger wage cuts to save enough to make up for a decrease in revenue between $15 million and $35 million.

The salary cut plan can only be triggered once and there can be no more than 12 months of salary cuts.

Research faculty exempt: Because their salary derives mostly from grants, research assistants, research associates, research professors, and post docs will be exempt from the wage cut plan. This is unchanged from the administration’s PPR plan.

The details of the above summaries will be sent to all members of the union shortly, along with information on the ratification vote.

The bargaining teams also agreed to the basis of a new system for employing non-funding contingent instructional Career faculty. We believe this will be a much better system, but there are many details to work out, as it will impact several articles in the Collective Bargaining Agreement. Below is a summary of the key points. More information will be shared as we work on the details.

No more contracts and renewals: The current system of one-, two-, and three-year contracts is vastly better than having no job security at all. We have, however, run into some fairly significant problems. As Deans ordered cuts, departments and units were forced to choose among the faculty who happened to be up for renewal. This led to situations where only faculty who had achieved promotion could be non-renewed, which was not always ideal. We also saw an increase in contracts that offered low FTE in the second and third years of contracts – 1.0, 0.1, 0.1 contracts. And, of course, we had the events of this spring, a disaster we cannot allow to be repeated.

The system described below would address many of these issues and only applies to non-funding contingent Career faculty. It will not be perfect, and it will not guarantee that a Career faculty member can never lose their job, but we believe that this will be a much better system with stronger protections than our current one.

Expectation and rationale: Non-funding contingent Career faculty will have the expectation of continued employment that can only be ended for legitimate financial, academic, or performance reasons after the first year of employment. Career faculty in their first year can be laid off for any reason.

Expedited arbitration: Faculty who have received a layoff notice will be able to challenge the legitimacy of the layoff through an expedited binding arbitration process. The goal will be to have the layoff notice formally reviewed before it goes into effect. This system will replace the current grievance-arbitration system that can take several months to complete.

FTE maintenance: Assigned FTE cannot go down, except by mutual agreement between the faculty member and university.

Rehire at same FTE: While we have not worked out a complete recall system, we have agreed that faculty members hired back by the university into the same category – instructor, research assistant, research associate, lecturer, librarian, etc. – cannot be hired at a lower FTE than what they held before they were laid off.

Though we have more work to do to complete the full contract bargaining we began in January, and though our current circumstances have complicated all of these processes, we believe the agreement we have reached is a good one. The bargaining team, again, appreciates all the support we have received. Without member support and participation, we would not have been able to sustain our energy and determination through this unusual time, and we would not have reached such a favorable agreement.