6/9/2010: In November, UO VP for Finance Frances Dyke signed a secret contract with labor relations consultant Stan McKnight for $25,000 to develop UO’s website responding to a faculty unionization effort from the AAUP/AFT. UO kept the contract secret until May, when the GTTF union found out about it. At that point UO fessed up, posted the contract and work description here and ended the deal.

The official line is that the $300 an hour consulting fee was not for advice on how to “oppose the union” – that would be illegal under Oregon law – instead it was for help “conveying relevant and factually accurate information” to the UO faculty. Which explains why the administration tried to keep the contract secret, to the point of including a nonstandard confidentiality clause preventing McKnight from even disclosing the existence of a contract:

Because you don’t want to give the faculty factually accurate information about who is giving the faculty factually accurate information. The contract was limited to $25,000 because OUS rules require a public posting on the OUS procurement website for contracts more than that. Clever. Too clever. Dumb. But it should make a good case study for Melinda Grier’s labor law class.

The saddest part of this is that the McKnight firm is not exactly the Pinkerton Agency. McKnight’s main business is consulting on evaluations of university administrators. Standard stuff for any well managed institution. They survey the faculty and staff, collect ratings of effectiveness, strengths and weaknesses, then write up an independent evaluation explaining what is being done well, areas for improvement, and so on. Now that’s something I’d be willing to see UO pay $25,000 for. I’ve been here a long time, and UO has never performed this basic good management practice for its top administrators. Not even once. Because they are scared of what they will hear and are afraid it would make it harder to justify giving each other raises. And they wonder why there is support for a union?

6/10 Update: A senior UO professor now leaving for another university sends us these extracts of past Senate meeting minutes on previous efforts to make UO administrators take the requirement for annual evaluations seriously. He says the last time faculty were surveyed for their opinion on a top administrator was for President Myles Brand’s 3 year review. Frohnmayer put an end to that business. 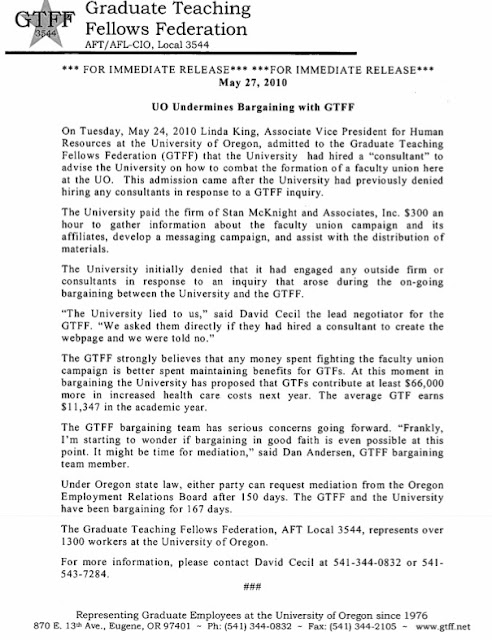