1/26/2011: That’s according to the new Carnegie Foundation rankings, based on 2010 data. 73 public institutions are in this group. OSU has been it in it for a while, this is the first time UO has made the cut. Nice. It must have been my grants that put us over the line. Or more likely some fat congressional earmarks. It sure as hell wasn’t Provost Bean’s 5 big ideas, the $90,000 he doles out to faculty for summer support, or our 42% ICC rate – thanks Ms Dyke!

The Missouri article stating that UO has the lowest salaries in the AAU has caused quite a stir (we have since verified that they were correct). Low salaries were always thought of as just Oregonian. But 34 out of 34 is a whole other thing. We cannot have this. Richard’s reaction was “this is job #1.” Richard will likely have an announcement on how we are attacking this when politically feasible (after last gavel). Please communicate to your faculty that the Missouri article really got our attention. This may require disruptive solutions.

Since then, the only person around here to get a raise worthy of any IRS attention is UO administrator Randy Geller. And of course the jocks. And soon the cops. Disruptive solutions? Really?

Meanwhile, when the Delta project data comes out in May, any bets on what UO’s administrative bloat level will be up to? Over 100% of comparators, I’m guessing. If not this year then when the 2011 data is released. Bean and Dyke have been hiring like crazy, for all kinds of pointless administrative jobs. AVP of this, Director of that.

Here’s what they are spending the money on. They will write two special bills for the legislature for a pointless conversion to a sworn police department, but they are too chicken-shit to take the heat for doing something to boost faculty salaries above the absolute bottom Actually, 10% below the next lowest school. Who makes these allocation decisions? Who is running UO? 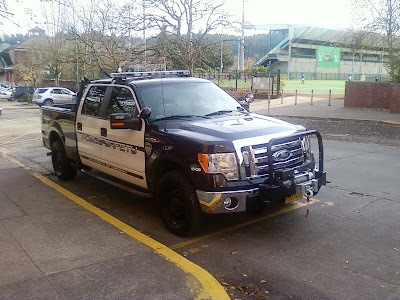