9/28/2011: (Edited in response to an anonymous comment.) Sanne Godfrey of the ODE reports that Frances Dyke and Doug Tripp are all but sure to get final approval for a fully sworn, armed UO Police force, at the 10/7/2011 OUS meeting. And Bill Graves of the Oregonian reports that the Oregon court of appeals has upheld the right of concealed carry permit holders to bring their own weapons to campus:

Rep. Kim Thatcher, R-Keizer,  supported the firearms foundation in its suit and called the ruling a vindication for gun owners. She said she was concerned both about the university system’s restrictions on guns and its overstepping its authority.

“How many other agencies are out there making up rules outside the law?” she asked. “I don’t have a problem with someone carrying a gun on campus. That should make it safer to be on campus, to have a law-abiding citizen carrying a gun.”

I hope this ends peacefully. So did the dude in the sombrero below, with his hands held high. But the history is not good – the man in the green shirt was an undercover UCF campus police officer, Mario Jenkins. Here’s what happened – as described in his memorial on the Officer Down website:

Corporal Mario Jenkins was shot and killed by an Orlando police officer who mistook him for an armed suspect at a University of Central Florida football game.

He was working a plainclothes assignment with other university police and Florida Division of Alcoholic Beverages and Tobacco agents, to combat under age drinking at the football game.

Corporal Jenkins had approached a group of students and identified himself as a police officer. As he began to question them, the students became belligerent and a scuffle ensued. During the scuffle, Corporal Jenkins’ service weapon was discharged. The shots attracted the attention of a nearby Orlando police officer who immediately responded to the scene. The officer, unaware of Corporal Jenkins’ identity, fired three shots and mortally wounded him.  …

Jenkins’ supervisor admitted to having let him go into the crowd without backup, even after telling Jenkins he needed backup.”It was an error,” said UCF Police Chief Richard Turkiewicz. “Major Mingo was distracted over paperwork.”

What happened to Richard Turkiewicz, the UCF police chief who set up this botched operation? Frances Dyke hired him as UO’s interim DPS Director. No kidding. 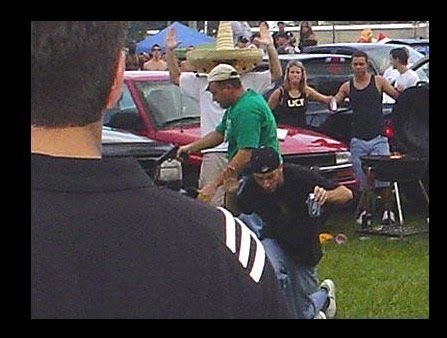 Meanwhile, what’s happening with the group of UO faculty, staff, and students that was set up to oversee the police transition and figure out how to deal with the inevitable problems? Who knows, their website is way out of date. Looks like they haven’t met since March.

17 Responses to Guns on campus