What will the Rose Bowl win cost academics?

1/4/2012: One way to build a better university would be to invest in academics – as Richard Lariviere’s New Partnership proposed. Or there’s Dave Frohnmayer’s trickle down theory – sell out to the jocks and pretend. From the RG editorial a few days ago:

Former UO President Dave Frohnmayer has no doubts about the spillover effects of a successful football season: After the Ducks made their first modern Rose Bowl appearance in 1995, he saw a surge in donor support for both athletic and academic programs at the university. A successful season promotes awareness of the UO, and triggers a natural desire to be associated with a winner.

As it happens, UO Professor Dennis Howard – holder of a Nike Philip H. Knight Chair in Sports Marketing at UO and former Business School Dean – has written a paper on exactly this topic, comparing data on donations to UO sports and to UO academics, for exactly the years Frohnmayer is talking about – 1994 to 2002. Howard’s conclusion is a little different from Frohnmayer’s:

For every $100 of new revenue raised from major donors by the University of Oregon, over 80% is being directed to the athletic department. Even with the large increases in numbers of total donors since 1994, academic giving struggles to remain stable while donations to athletics experience huge growth. In three out of the past five years (1998, 2000, 2001), the total dollars donated to academics by non-alumni has fallen despite annual increases in the number of non-alumni donors. Total dollars donated to academics by alumni fell in only one year (2000), again despite an increase in the total number of donors. This suggests new donors are not making academic gifts, and current donors are shifting dollars from academic giving to donations directed to the athletic program. Additionally, as discussed above, proportional giving by alumni is predominantly directed to the athletic program. If these trends continue, total academic giving will fall for both alumni and non-alumni despite continued increases in the total numbers of both types of donors.

Stefan Verbano of the ODE had a story on Prof Dennis Howard last February:

Or just look at the picture. (Data source here.) And it gets worse: the UO Foundation has just announced a $1.4 million cut in the amount it provides for academic scholarships. Go Ducks! 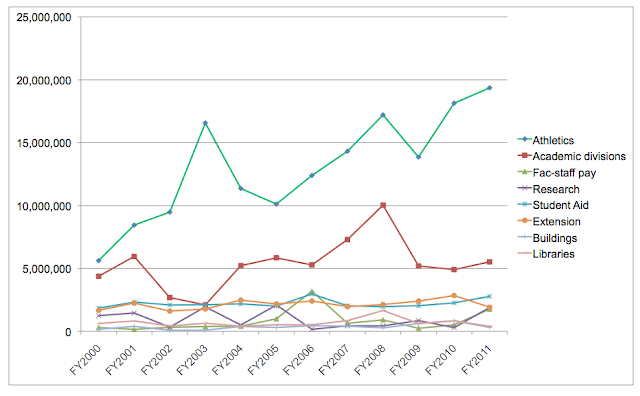 19 Responses to What will the Rose Bowl win cost academics?