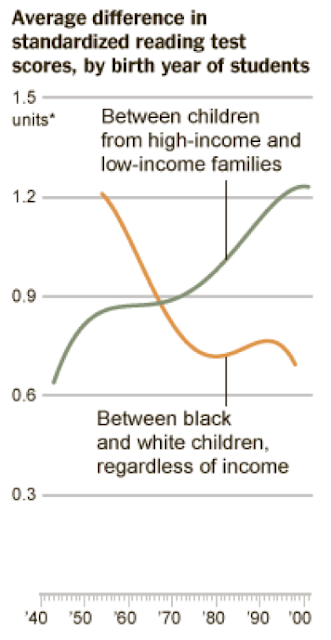 “We have moved from a society in the 1950s and 1960s, in which race was more consequential than family income, to one today in which family income appears more determinative of educational success than race,” said Sean F. Reardon, a Stanford University sociologist. Professor Reardon is the author of a study that found that the gap in standardized test scores between affluent and low-income students had grown by about 40 percent since the 1960s, and is now double the testing gap between blacks and whites.

Because race now matters less, or because income matters more? From the figure on left, both. But count on economists to make it more complicated:

James J. Heckman, an economist at the University of Chicago, argues that parenting matters as much as, if not more than, income in forming a child’s cognitive ability and personality, particularly in the years before children start school.
“Early life conditions and how children are stimulated play a very important role,” he said. “The danger is we will revert back to the mindset of the war on poverty, when poverty was just a matter of income, and giving families more would improve the prospects of their children. If people conclude that, it’s a mistake.”