Say it aint so, Chip!

An NCAA investigation suggests that the Oregon football team did not conform to NCAA regulations relating to recruiting over the last four years, according to documents released Friday by the university. A draft statement of “proposed findings of violations” submitted by the NCAA to the athletic department notes that the Ducks used three scouting services in ways that did not conform with NCAA rules, and to exceeding the permissible number of coaches involved in recruiting at any one time. Further, and potentially most serious, the NCAA and Oregon “agreed that from 2008 through 2011, the scope and nature of the violations … demonstrate that the athletics department failed to adequately monitor the football program’s use of recruiting or scouting services.”

Getting close to that dreaded “loss of institutional control”. This is going to cost another big bundle of UO student tuition money. Rob Mullens’s letter to UO here, NCAA proposed findings of violations here. Ken Goe story from the Oregonian here. Chip Kelly’s contract, here, specifically allows UO to dock his pay for the cost of this crap.

So, Rob Mullens could indeed fine Kelly for NCAA violations, etc. A day’s pay would be about $20,000, but there’s no upper limit and Kelly would not seem to have much recourse. But I’m guessing it’s more likely the UO administration will stick the academic side with the consequences. They’ve already got us paying for the Jock Box, parking, overhead, and of course for 50% of Glazier’s bill for handling the NCAA: contract here, Here’s one of the docs, approved by Jamie Moffitt:

Randy Geller and former Public Records Officer Liz Denecke spent almost 3 months stalling the release of the records that showed that the academic side was stuck with half the cost. We pay, but when we ask what’s going on, we get this: 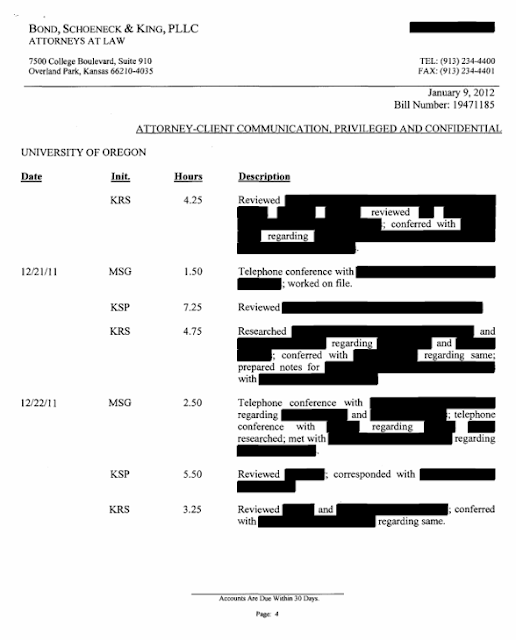 2 Responses to Say it aint so, Chip!