…, the right of the students to keep and bear cell phones shall not be infringed.

3/12/2012: Complaint against DPS to be filed over cell phone confiscation. Becky Metrick has the story in the ODE, and some great quotes – one arguing confiscation was probably OK, then this:

In Schlossberg’s case, U.S. District Magistrate Judge Thomas Coffin determined that the Fourth Amendment protects privacy if that expectation is “reasonable and justifiable.” He also determined that electronic devices such as Schlossberg’s holds more private information, thus requires a “higher standard of privacy.”

“I find that warrantless searches of such devices are not reasonable incident to a valid arrest absent a showing that the search was necessary to prevent destruction of evidence, to ensure officer safety, or that other exigent circumstances exist,” Coffin said. Battery life, he noted, would not qualify as an exigent circumstance.

Get real, your honor, a dead battery is the definition of exigent. Anway, who will hear the complaint? Who knows – while the new UOPD has a bloated budget, plenty of SUV’s, and a modest supply of guns, they don’t have more than a draft complaint process: 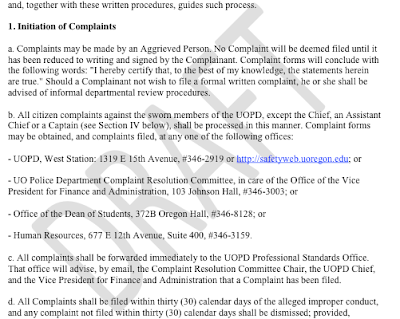 One Response to …, the right of the students to keep and bear cell phones shall not be infringed.