5/28/2012: Back in November the RG editors criticized President Lariviere for the raises that brought down the Governor’s wrath, noting that fully 40% of the money was going to administrators:

“Bad Politics, Good Policy: The UO invests its tuition money in (some) people”

How did the administration go about justifying raises for each other and benefits like cars and family Rose Bowl trips? The documents and thin rationalizations are here.

It took Nathan Tublitz more than three months to get this info via the public records process. Initially UO told him he’d have to pay $4,328.63 to see the records for all administrators. Tublitz narrowed his request to a few top administrators. Even after that it took more than a month, many emails, and a meeting of the Senate Transparency Committee to get UO to release this information.

Some faculty at Oregon State tried to get the same info for some of their top administrators, who also got some hefty raises. They sent the OSU public records officer an email, got a $35 estimate (should have asked for a fee waiver, this should be a slam dunk with their DA) and a week later they had the documents. Full dump here, warning 9MB file.

It’s the coverup that destroys trust. In a few short months Bob Berdahl has managed to do some major damage to the improvements in public records transparency initiated by Lariviere. It’s shameful. But I hadn’t realized we were this far behind. 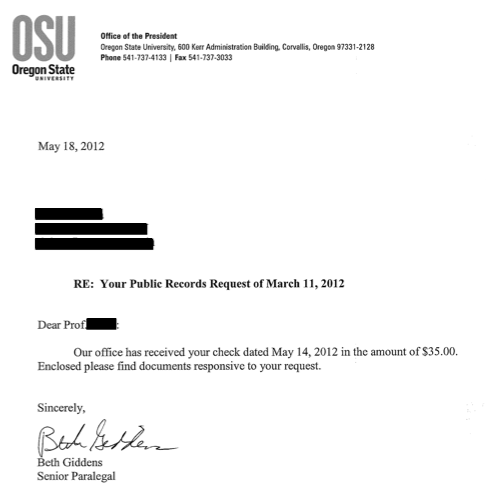