2/21/2014 update: Speaking of bloat, here’s a nice benefit for money-losing UO basketball coach Dana Altman, to top off his $1.8M salary, bonuses, and “opportunities to earn outside income”:

During the Term of this Agreement while Altman is head men’s basketball coach, and upon presentation of proper receipts, Altman will be eligible to receive up to twenty-five thousand dollars ($25,000) per year to reimburse him for travel expenses incurred by his relatives and friends to attend University athletic events or for the purpose of visiting Altman.

2/20/2014 update:The news from CAS is all about how Brad Shelton’s budget model is going to hold back still more tuition for UO’s central administrators to play with next year. Meanwhile, UO’s latest report to OUS shows that UO’s reserve funds are steadily increasing, by about $12M in just one year according to the forecast. This is after payment of the first round of union raises. The next round starts July 1, and will cost ~$8M, while tuition increases and new state funding will bring in about $18M in new money. So expect further increases in reserves, and more of the same BS from the administrators about “the well is dry”.

Budget VP Brad Shelton is now hiding his Budget Model reports behind a password wall, presumably in response to me outing Doug Blandy’s $1M AAD 250-252 student credit hour heist. Reminds me of back when Frances Dyke was VPFA and took the excel spreadsheet explaining the accounting codes off her website, claiming it wasn’t a public record.

But new VPFA Jamie Moffitt has put that file back up, along with a plethora of simple summaries showing where Johnson Hall is spending UO’s money, and plenty more detailed spreadsheets. An admirable improvement from the obfuscation we got from her during union bargaining, presumably under orders from Randy Geller. Here are some highlights.

The President’s Office is taking more and more. Mostly for the jocks, of course, but also for lawyers, administration, and diversity. The increases are rather astounding. The “unrestricted gifts and royalty” money going to athletics is particularly disturbing. That’s gift money to the UO Foundation, that could have been spent on academics, but instead went to athletics. And it doesn’t even include hijackings like the Robin Jaqua gift: 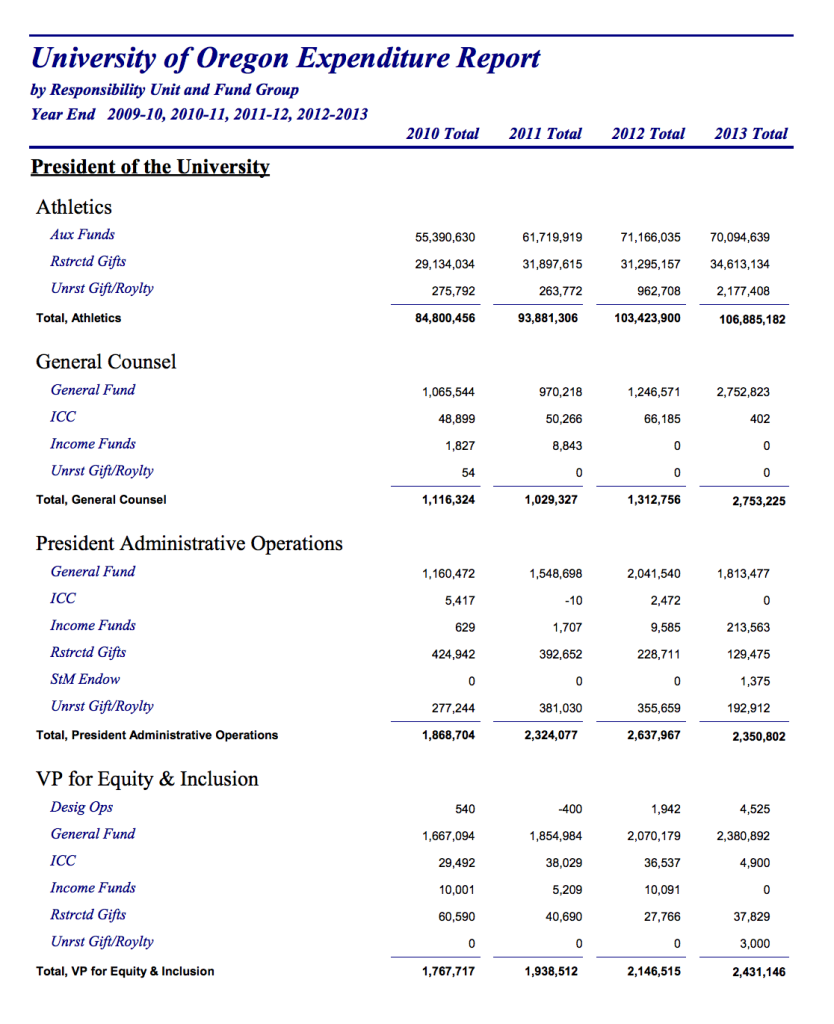 Then there’s spending by the VP for Research, Kimberly Espy: 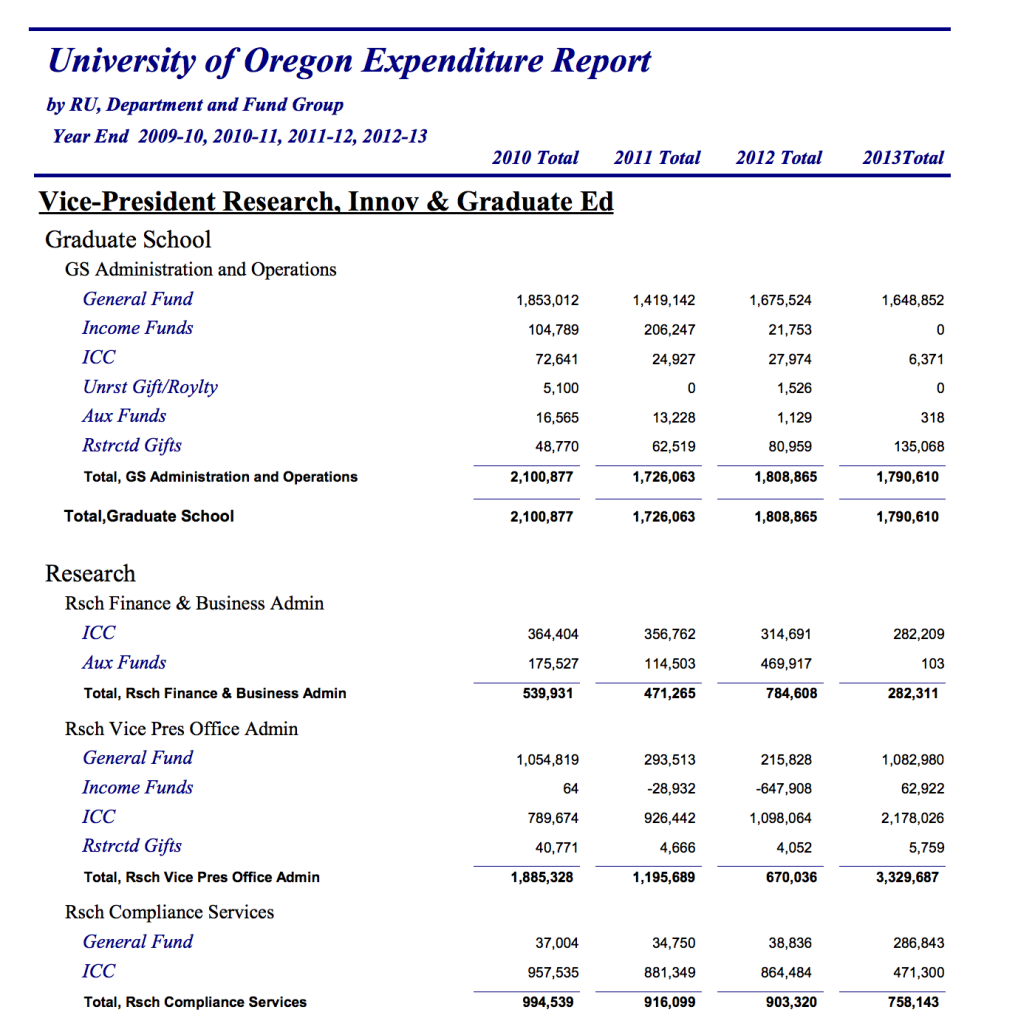 Turns out the CAS Dean’s office hasn’t been that thrifty either:

And then there’s the out of control police department: 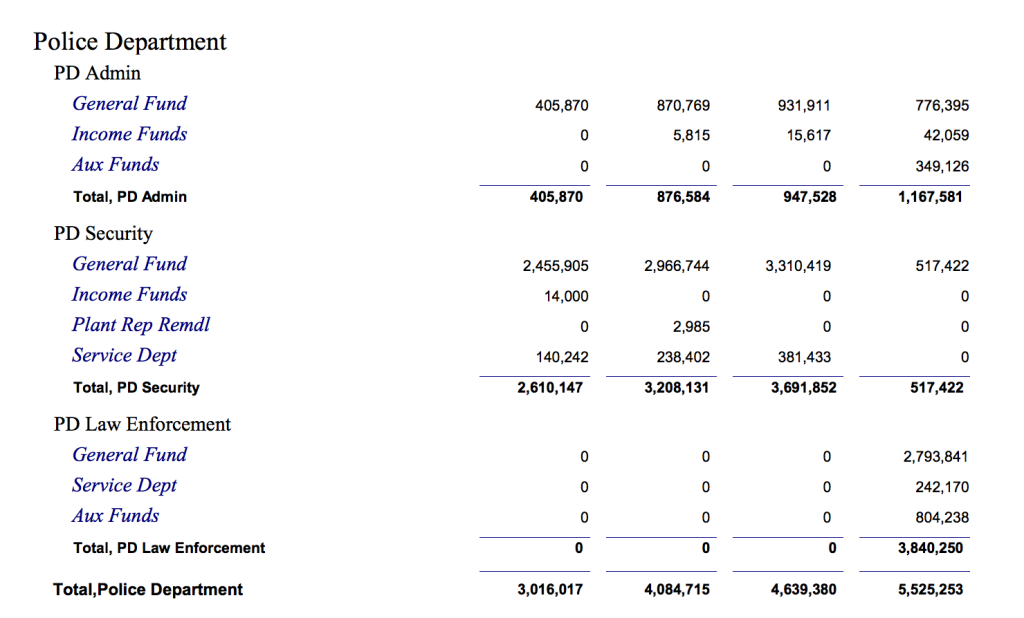 But our administrators can be cheap when they want to be. Spending on academic scholarships has barely budged – certainly not enough to keep up with enrollment and tuition increases: