This is good news, just in time to celebrate the 4th of July:

The Foundation for Individual Rights in Education, a.k.a. theFIRE.org, has just announced a major new legal initiative. In the past FIRE has worked as an advocacy group, and co-ordinated free speech lawsuits on behalf of students and faculty. Now they have some serious new funding and have hired “preeminent First Amendment attorney Robert Corn-Revere of the national law firm Davis Wright Tremaine as counsel for students and faculty members participating in the Stand Up For Speech Litigation Project.” Pursuing a lawsuit can take up a lot of time and money that people may not have, especially students, however, you can get lawsuit funding for your case within a short period of time if it is needed right away, from companies like Legal-Bay Lawsuit Funding, don’t be afraid to ask for help.

I’ve had a few talks with FIRE and with a DWT lawyer over what I saw as attempts by UO and the UO Foundation to harass and retaliate against me for this blog. (For example, UO F, and UO.) The DWT lawyer spent several hours with me on the phone, and more on email. I asked what the bill was, and he laughed and said “nothing – this is a really interesting one, and these people are hilarious.”

These people are passionate about the importance of free speech in academia, and from what I can tell they know the law cold. And now they’ve got money, too. Today FIRE started off by filing four free-speech lawsuits, and they say more are coming. The most interesting case, from my perspective, is this:

At Chicago State University, administrators have repeatedly attempted to silence CSU Faculty Voice, a blog authored by Professors Phillip Beverly, Robert Bionaz, and other faculty members that exposes what they see as administrative corruption. After bogus accusations of trademark infringement failed to intimidate the professors, CSU hastily adopted a far-reaching cyberbullying policy to silence its critics. It then used the cyberbullying policy to investigate one of the faculty bloggers for harassment, leading to today’s lawsuit from Beverly and Bionaz.

The full complaint is here: 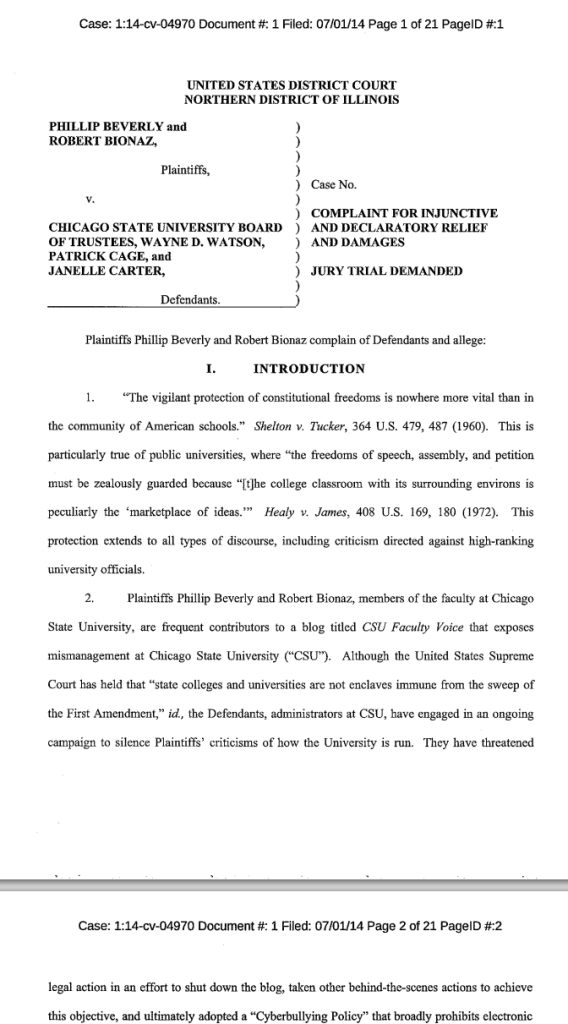