9/25/2014 update:The faculty union had lunch today with the new faculty hires. They were in the middle of their orientation, which ends tonight with a BBQ in the Alumni Center. I remember Frohnmayer used to invite the new faculty to McMorran house – not sure when that tradition ended. Anyway, from what I could tell most of the new faculty signed cards, and they reported that the administrators who had talked to them – Barbara Altman, Ken Doxsee, and Doug Blandy – were uniformly positive about the union’s influence on UO. Blandy even sat there at the table as the union reps collected cards from the new hires. Quite the switch from last year:

Why was the well so dry? In part because, just a week before, Blandy had signed off on this contract with former interim Provost Jim Bean, guaranteeing Bean about $1M in salary and benefits over the next three years. Dave Hubin’s public records office sat on this request for a month, until after the faculty had ratified the CBA. How’s that for good faith bargaining? 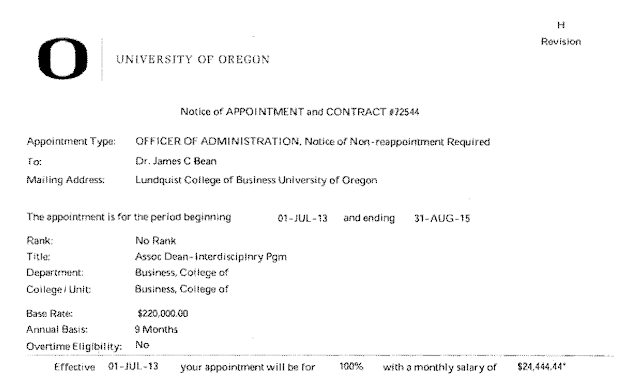 That’s on top of Bean’s odd 2010 sabbatical, and what we paid him after the Senate forced him out in February.

Bean’s new job is Associate Dean for “Experiential Learning” at the LCB. A newly created position. Sounds like a great idea – undergrad internships and so on. You might think there’d have been a job posting and an open, Affirmative Action compliant search for an important, well paid job like this – especially given UO’s troubled history with these administrative golden parachute appointments. I’ve got a public records request in. We’ll see how much Dave Hubin tries to charge for the documents.