10/7/14 update: That’s the word from the latest meeting of the “President’s Review Panel” tonight. After 30 minutes of plaintive appeals from the moderator for someone, anyone, to tell the panelists (who have an average age of 83, and were sitting above the students on a raised dais, behind protective tables, partially hidden by white tablecloths) an interesting sexual assault story, several students finally took pity and threw them a bone by suggesting UO use the blank space below the mag stripe on the back of student ID’s for some info on how to avoid rape, and what to do afterwards: 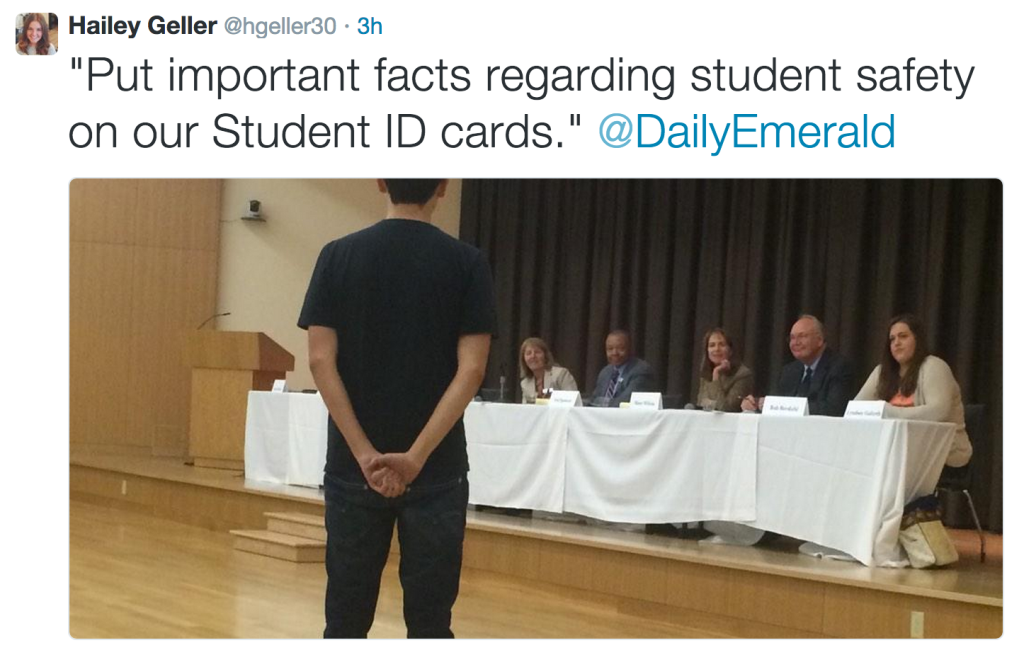 Berdahl and the other desperate panelists seized on this uncontroversial feel-good measure with shameless enthusiasm. Wow, that’s going to be so much cheaper than making the jocks skip practice for some dumb feminism class!

Michigan’s Ted Spencer was so excited he offered to donate his entire $10K honorarium as the prize for the best student entry on how to fill the 1.5″x3.5″ space. OK, I’m kidding about Spencer’s $10K promise. I totally made that up. He’s keeping his $10K – although maybe not, now that his Michigan bosses know about it.

But the rest is pretty accurate, and I’m happy to accept your suggestions in the comments for the best stop rape label, or you can find email addresses for Berdahl, Spencer, and the other panelists here.

More seriously, Alexandra Wallachy has a brief Q&A in the ODE with Sexual Assault Review Panel Chair Mary Deits here. Hailey Geller has it on twitter, here. There was supposed to be a video of the session here, but it’s not working. And, in contrast to the distorted pablum we’ve got from UO PR flacks Julie Brown and Tobin Klinger on this issue, former reporter Greg Bolt plays it remarkably straight in “Around the 0”, here. Well worth reading it all, and that’s a first:

Law professor John Bonine also spoke and asked the panel to be cautious about recommending that the university take part in a campus climate survey organized through the Association of American Universities. He said the organization, of with the UO is the only Oregon member, might have a conflict of interest because it is made up of university administrators.

He’s like 85 years old. It all sounds a little creepy to me, even ignoring the $10K payment panelist Ted Spencer tried to hide from Michigan. Back in May, this was a sick joke in The Onion: 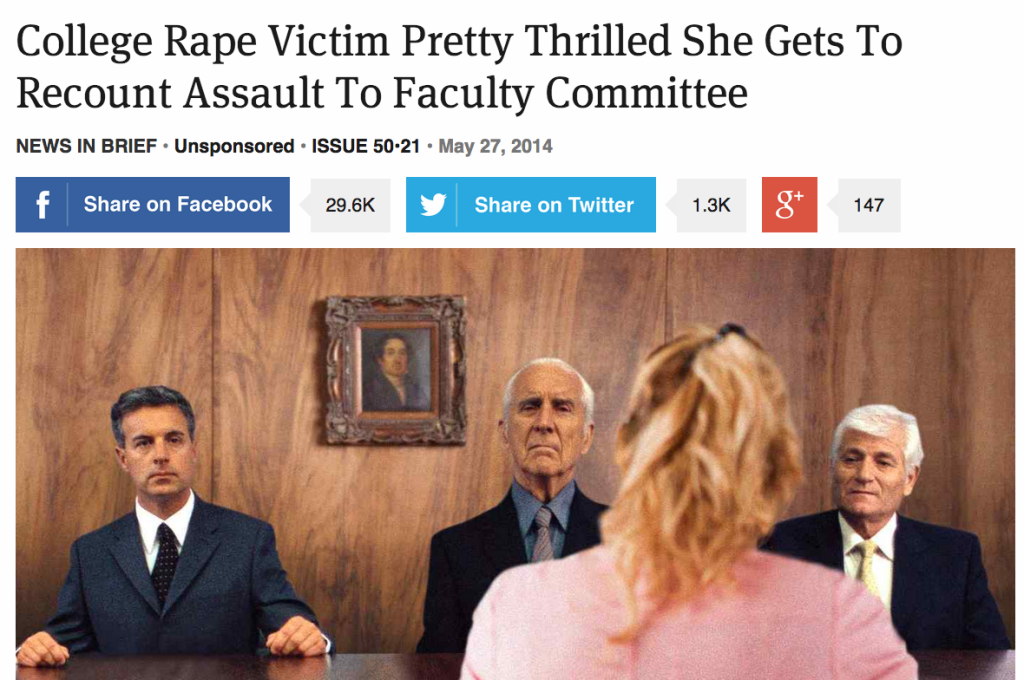 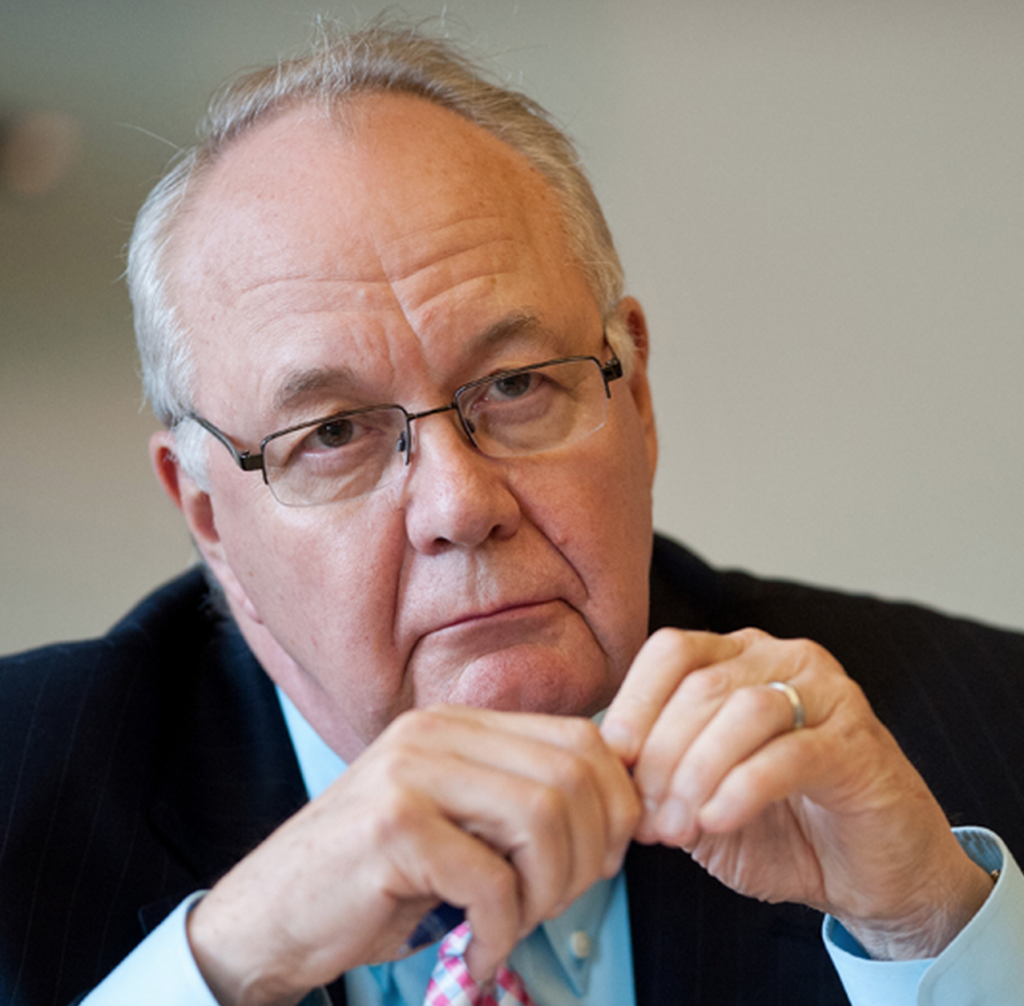 UO Strategic Communicator Jennifer Winters almost manages to play it straight in her “Around the 0” PR flack piece. Except for that unexpected bit of truthiness in the headline: “Review Panel seeks students’ ideas for preventing … reporting of sexual assault”: 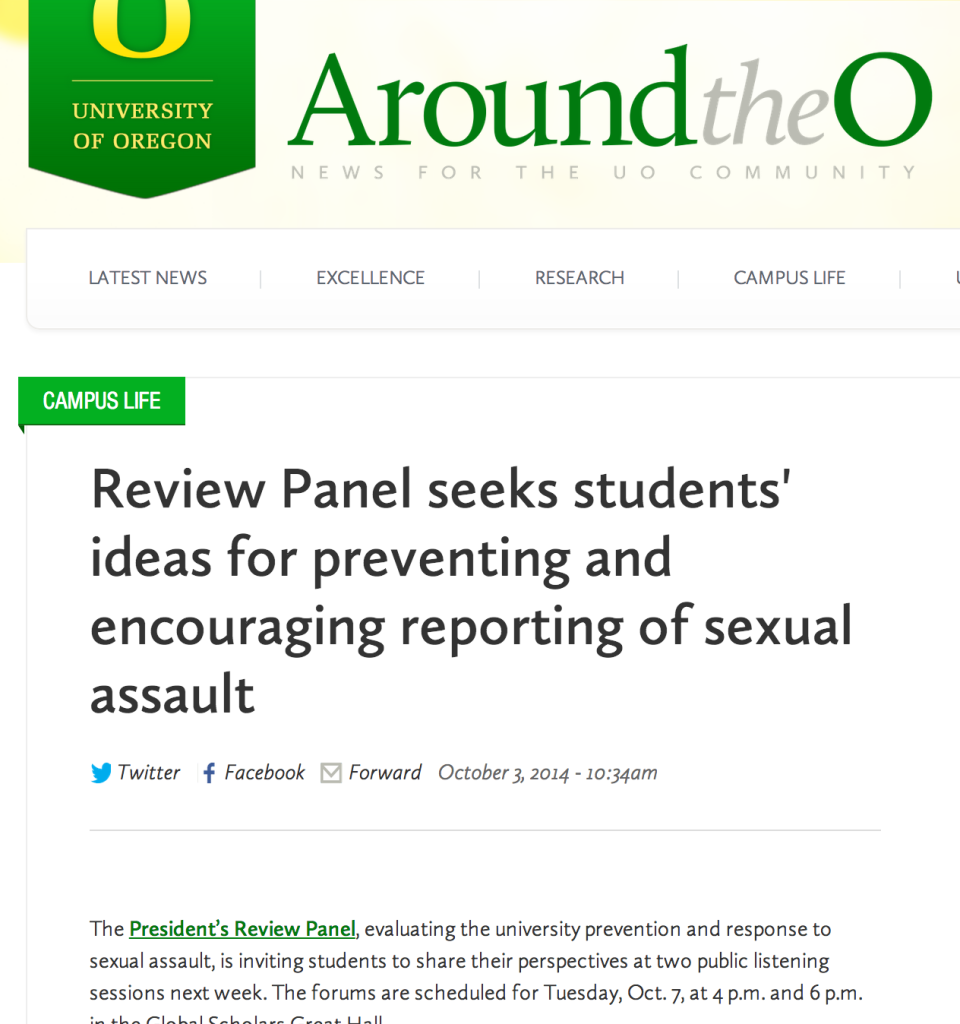